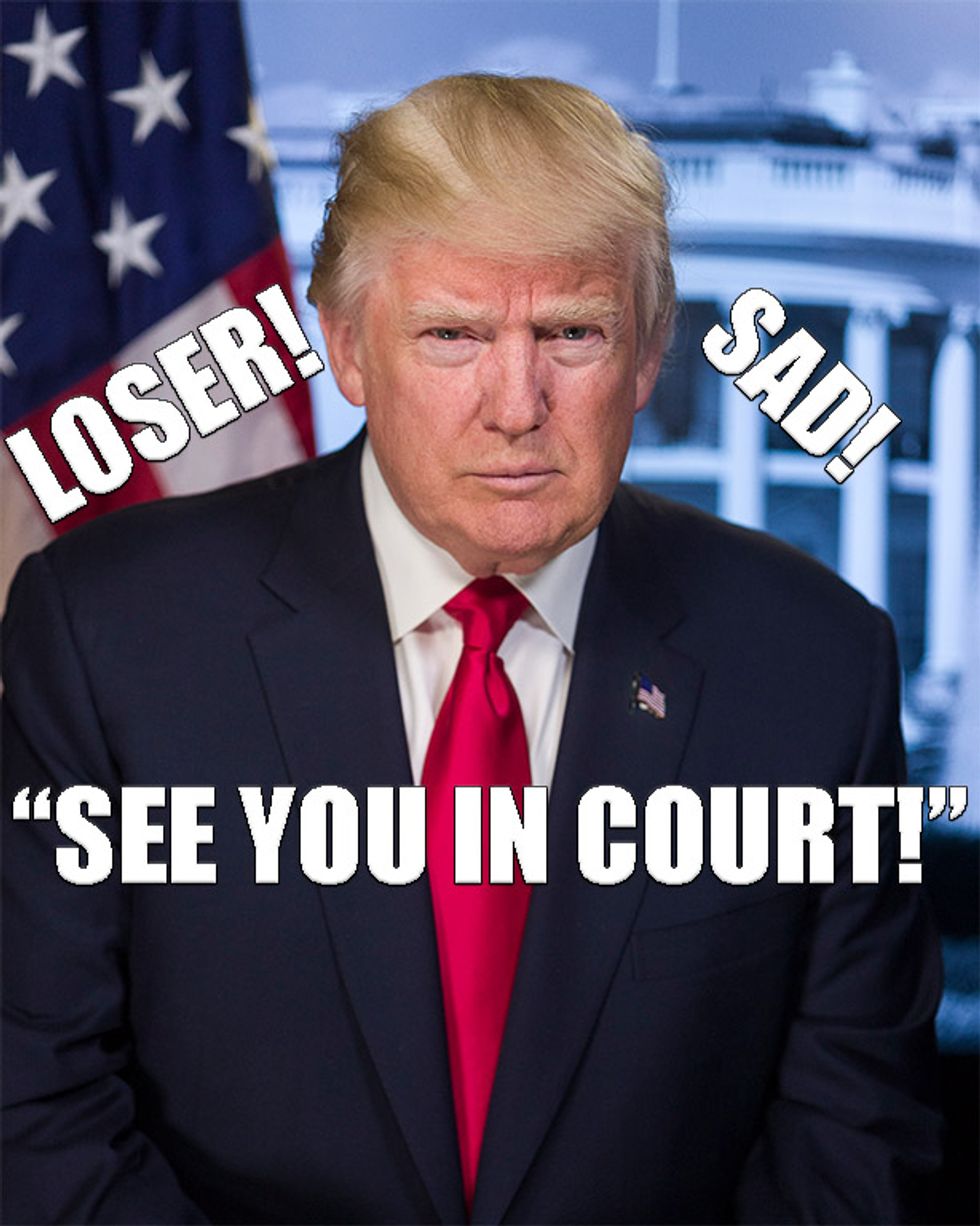 For some weird reason, Donald Trump, president of these United States (vomit barf ugh), has decided to retain private counsel over this whole "Trump-Russia" thing. We say "weird" because Trump has said literally one million times that he is completely innocent of colluding with Russia, and so are all his friends and family (who all seem to have weird Russian connections). So why should he need private counsel? Oh yeah, it is because Hillary Fake News Media Upset About Losing 2016 Election Can't Handle Trump's YOOOGE Electoral College Win Woulda Won Popular Vote If There Were No Illegal Messicans. When you have a pitchfork mob like that coming after you, you'd better lawyer up, lest you get convicted of a crime you definitely did not commit!

Trump's new lawyer is a very nice man named Marc Kasowitz, a partner at Kasowitz, Benson, Torres & Friedman in New York City. He has worked with Trump for a very long time! During the campaign, he wrote a nice threatening letter to the New York Times demanding the paper stop publishing stuff about ladies' allegations that Trump tried to Stranger Danger Bad Touch them, because bitches be lyin'. In March, he filed a response to a lawsuit from one of the Trump accusers, former "Apprentice" contestant Summer Zervos, saying she couldn't sue President Mar-a-Lago because of "presidential immunity" and also because President Mar-a-Lago is FAR TOO BUSY to be sued by ladies on gropey sexual harassment allegations.

He likes long walks on the beach, ordering one million pizzas to his friends' houses as a silly prank, and oh yeah he represents Russia's largest bank HAHAHAHAHAHAHA WHAT ARE THE CHANCES? Sberbank is Vladimir Putin's favorite of all the Russian state-owned banks!

Let's outsource our blogging work to Buzzfeed for a second, for some details on Kasowitz's work for Sperm Bank:

One of President Donald Trump’s personal attorneys was just named a lead attorney to defend Russia’s largest state-run bank against claims that it helped a granite-mining company raid and kill off its main competitor in the Russian market.

Marc E. Kasowitz is representing OJSC Sberbank of Russia, which is accused in US federal court of conspiring with granite company executives — including Russia’s former minister of economy and trade — in what the plaintiffs say amounts to a “textbook case of Russian corporate raiding.”

Cool story, bro. We just hope Sberbank doesn't come up in special counsel Robert Mueller's investigation, because HOO BOY. We can't imagine it would, except for how Herman Gref, Sberbank's CEO, was a sponsor of Trump's 2013 Moscow Miss Universe Pageant, and he put together a nice dinner during that trip attended by Trump and ten of the biggest oligarchs in Russia.

Here's what Gref thinks about our boy Trump:

“I have met Trump and my impression from the interaction is very positive. I know several people from his team,” said Gref, who has been a close Putin adviser ...

Totally normal! Nothing to see here! YOU JUST MOVE ALONG NOW, OK?

Also, this one Russian oligarch, Sergey Gorkov, who used to be deputy chair of Sberbank, had a weird meeting with Jared Kushner during the transition, while the bank was under US sanction for Russia's invasion of Crimea, that for some reason J-Kush failed to report. How weird!

And now we will outsource our blogging to Newsweek, for more background on Kasowitz's work for Trump:

In 2006, Trump had the lawyer sue an author who had written that Trump was worth less than $1 billion.

Hahahahahahahaha, yep, this is THAT lawyer, who sued a guy for saying Trump was only worth hundreds of millions of moneys, as opposed to YOOOOGE BILLIONS. Sadly, they lost that one.

OK, so this guy has Russian dressing all over him, he yells at ladies Donald Trump may or may not have tried to grab by the pussy, he's defended Trump against Trump University fraud charges ... he sounds just great!

One good thing that might come from Trump lawyering up with his own long-time lawyer is that it's being reported that slimy droopy congealed sac of sadness Joe Lieberman is no longer in contention for FBI director. Now, it could simply be because the Liebs doesn't want the job, or because Trump yet again exhibited poor judgment, as he thought Democrats would just LOVE the choice. But it also could be because Lieberman is a senior counsel at ... ding ding ding! Kasowitz, Benson, Torres & Friedman! Conflict of interest say what?

Anyway, this all sounds just great and we would like to state for the record, since we are talking about some litigious-ass motherfuckers here, that the thing we said about Kasowitz ordering pizzas to his friends' houses as a prank was a JOKE, as we have literally no evidence he'd ever do such a thing. He also may or may not actually like long walks on the beach, but if he doesn't, then he's a fucking weirdo.