Trump's Opioid 'Plan': First Thing We Do, Let's Kill All The Drug Dealers 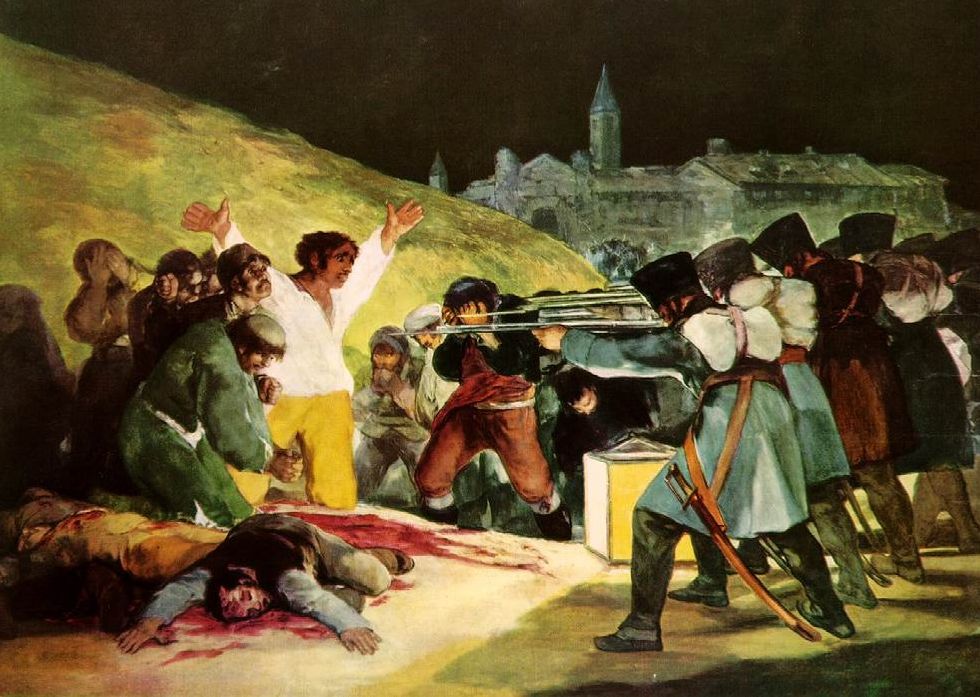 A shanda for the Goya.

Donald Trump set forth his "policy" -- if an irrational reflex can be said to be a policy -- for "ending" the opioid epidemic during a trip to New Hampshire Monday, adding that crisis to several other national problems the administration won't really do much to address. But he gave the speech, so everything's good. Actually, that may be a little unfair: A few of the measures he doesn't actually give two shits about may actually be helpful, if they survive to be enacted by lower levels of the government where stuff gets done. These would include expanding access to inpatient addiction treatment for Medicaid patients, attempting to reduce the overall prescribing of opioids (while somehow making sure patients who need pain management aren't stranded), and greatly expanding the availability of naloxone, the life-saving drug used to treat overdoses. The plan even seeks to screen new prison inmates for opioid addictions and get them into treatment.

Mind you, Donald Trump didn't go into much detail about that stuff -- but the people actually working on the plan got some of it onto the teleprompter, so that's good. But what really excites Donald Trump is Getting Tough, because as you may be aware, America has never tried Getting Tough on drugs, not once, and if only we'd Get really Tough, then drug use would surely plummet like the bodies of suspected drug users shot by Rodrigo Duterte's police and vigilantes in the streets of the Philippines.

There's only room for five or six ideas in Donald Trump's brain, like building a wall, getting more guns into the hands of everyone and killing Obamacare (never mind that Medicaid is central to getting people treatment). One of the other biggies is that crime is definitely solved by relentless, tough punishment, ideally the death penalty. Even for people who haven't committed capital crimes, like the Central Park Five, when they were accused of raping and beating a white jogger. And also the Central park Five, when they were conclusively exonerated of that crime, but Trump still knew in his heart they needed to be executed for something.

So when it's time to talk about the opioid crisis, obviously Trump has no interest in that wussy "treatment" stuff -- sure, whatever, he'll sign off on it if it's put in front of him, but it might as well be a plan for staffing the Commerce Department or guaranteeing due process or repealing child labor laws: no real interest. But killing criminals, or at least locking them up forever, that is some good stuff:

Toughness, that's the ticket. Ansd everyone before Trump, they were weak, but only Trump is tough:

So if we're not going to get tough on the drug dealers who kill thousands of people and destroy so many people's lives, we are just doing the wrong thing. Toughness is the thing they most fear.

And he's gonna get tough on EVERYBODY, don't you go thinking it's mostly blacks and browns, though obviously Trump knows they're the biggest problem, which is why building the border wall is absolutely necessary, we have no choice. And also cracking down on sanctuary cities, because more brown people and crime. But really, "everybody" will be treated toughly:

Whether you are a dealer or doctor or trafficker or a manufacturer, if you break the law and illegally peddle these deadly poisons, we will find you, we will arrest you, and we will hold you accountable.

Did Trump make any mention of the biggest pushers out there, the Sackler family, whose Purdue Pharma brought us OxyContin? No, but he said "manufacturers," so obviously Trump intends to have some corporate executives charged with murder, or at least some very serious paperwork violations.

Trump knows it works, because his pal Duterte says it does, and also, the death penalty, he said, actually eliminated drug use in some country he's sure exists but neglected to name. That country has no drugs because it has "zero tolerance for drug dealers":

"Take a look at some of those countries," Trump said. "They don't play games. They don't have a drug problem."

Filipino Donald Trump OK With Being Called 'Hitler,' As Long As He Slaughters The Right People

The President of the Philippines seems determined to apply Godwin's Law to himself.

It's true, you know. Duterte's war on drugs has racked up over 12,000 extrajudicial killings since he started his drug war in 2016, and eventually you have to figure he'll run out of people to kill. Maybe when his death toll reaches genocidal levels -- since Duterte's already said he'd be good with that, if he could kill, say, three million drug addicts.

Oh, and to keep kids from ever trying drugs, Trump has an answer, too:

Trump expresses support for anti-drug commercials aimed at kids to stop them from getting addicted to opioids: "That's the least expensive thing we can we do, where you scare them from ending up like the people in the commercials" pic.twitter.com/rIgUmRBMHL

See, all you need to do is have a lot of really GREAT commercials showing just how bad drugs are, no one will use drugs anymore. Remember how great those ads worked in the '80s and '90s, and nobody just laughed at them and made parodies instead?

Oh sure, a lot of "experts" might say mass incarceration and scary ads weren't actually effective at all, but that's probably because we've never tried getting tough before. REALLY tough.

Yr Wonkette is supported by reader donations. Please click here to help fund our "St. Elsewhere" reboot. If the '80s are back, we may as well have some of the good parts.