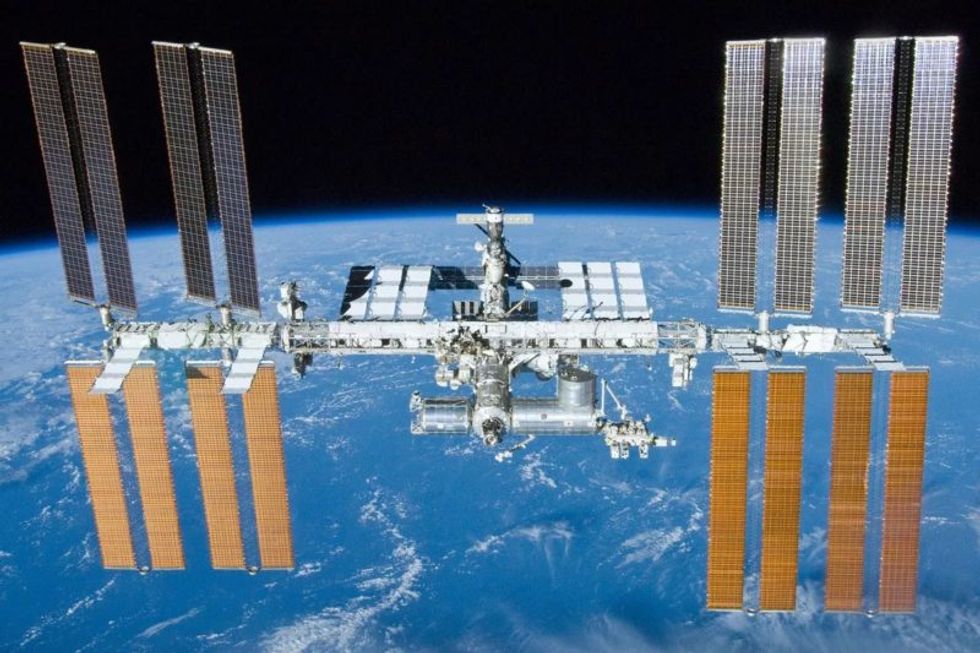 Also, the "For Sale" ad on Craigslist is full of typos.

Space is big. Really big. You just won’t believe how vastly, hugely, mindbogglingly big it is. I mean, you may think Donald Trump's stupidity is vast and galaxy-spanning, but that’s just peanuts to space. Still, Trump's supply of stupid is awfully impressive, as demonstrated by Sunday's Washington Post story on a leaked NASA document revealing the administration's plan to stop funding the International Space Station and turn it over to private industry. Happily, virtually everyone, including companies already doing free enterprise in space, thinks that's just the worst idea ever. Even worse than trying to design something completely foolproof while underestimating the ingenuity of complete fools.

NASA is currently studying how the service life of the ISS could be extended to 2028 or beyond, but there's also this proposal to just pack it in. The administration's vision would mean ending ISS funding altogether by 2024, and between now and then coming up with an actual plan for unloading the station -- which America only spent $100 billion building and running -- over to somebody with an idea for making it a for-profit venture. There's no real transition plan yet, but by golly, that's never stopped Trump and company before:

“The decision to end direct federal support for the ISS in 2025 does not imply that the platform itself will be deorbited at that time — it is possible that industry could continue to operate certain elements or capabilities of the ISS as part of a future commercial platform,” the document states. “NASA will expand international and commercial partnerships over the next seven years in order to ensure continued human access to and presence in low Earth orbit.”

Plans to develop the ISS as a Trump hotel are so far not envisioned, but just give the bastards time. Such planning as they've done so far is mostly a plan to spend money on getting America out of the space business, which should be handed over to business, just like public schools. The administration will request $150 million for 2019, and more each year after that,

to enable the development and maturation of commercial entities and capabilities which will ensure that commercial successors to the ISS -- potentially including elements of the ISS -- are operational when they are needed.

"Potentially including elements of the ISS"? Sounds like just letting it fall to Earth actually is one of the options.

The one bright spot here is that virtually no one is standing up and cheering for this brilliant idea. Even Ted Cruz -- the profoundly anti-science dickhead who thinks NASA shouldn't waste money studying Earth, because global warming is bad for his donors in the oil bidniss, is appalled at the report:

Last week, Sen. Ted Cruz (R-Tex.) said he hoped recent reports of NASA’s decision to end funding of the station “prove as unfounded as Bigfoot.” He said the decision was the result of “numskulls” at the Office of Management and Budget.

“As a fiscal conservative, you know one of the dumbest things you can to is cancel programs after billions in investment when there is still serious usable life ahead,” he said.

Yes, that's how bad things have gotten. We're forced to agree with Ted Cruz. Now please excuse us while we go wipe our memory core.

The WaPo piece is full of quotes from space capitalists who think this plan stinks to high heaven, which is actually well past low-Earth orbit. There's the CEO of Made In Space, an outfit that's actually doing small-scale manufacturing with 3D printers on the ISS, who says, "The ISS is built for science and human exploration, it’s not built for profit seeking." There's also Frank Slazer, of the Aerospace Industries Association, who points out a rather inconvenient detail the Trump geniuses appear to have overlooked, which would be the first word in the space station's freaking NAME:

“It will be very hard to turn ISS into a truly commercial outpost because of the international agreements that the United States is involved in,” he said. “It’s inherently always going to be an international construct that requires U.S. government involvement and multinational cooperation.”

No love from Boeing for taping a "For Sale" sign to the space station's window, either:

Last month, as reports circulated about NASA pulling the plug on the station, Mark Mulqueen, Boeing’s space station program manager, said “walking away from the International Space Station now would be a mistake, threatening American leadership and hurting the commercial market as well as the scientific community.”

The NASA document appears to be the only booster (get it?!) for privatization, gushing about a still more glorious dawn that will see

the emergence of an environment in [low Earth orbit] where NASA is one of many customers of a non-governmental human space flight managed and operated enterprise, while providing a smooth and uninterrupted transition.

Again, no details on how that transition would take place, what companies might want to buy the ISS (probably none), what private industry would even do with it (probably nothing -- again, it's built for research), or how exactly we'd work all that out with the other partners in the ISS: Canada, Japan, Russia, and the 11 countries in the European Space Agency. We have a feeling they might not be too jazzed at the idea, particularly since half of the station was built and is "owned" by Russia, and the other half consists of modules built jointly by the USA and its international partners. It's not especially practical to talk about taking our modules and going home.

It seems unlikely this leaked document will be the last word on the matter -- while nobody may want to try making a free-market go of the ISS, it does have powerful political friends in Congress and in the aerospace industry, and jobs really do depend on having a government-run space program, as Time points out:

It’s not just Texas and Florida that would be ticked off at station privatization. Like any good, unkillable government project, the ISS has its roots sunk in congressional districts all over the country, where manufacturers and suppliers have long relied on regular contracts to continue servicing the station. You can barely turn a bolt in the station without somebody’s cash register ringing on Earth. Running that revenue through private lessees would only dilute the cash flow.

So there we are again: Big Aerospace and defense contractors feeding at the public trough may end up being the best hope for the ISS continuing as it has. We're OK with that -- a little irony is far more appealing than seeing one of humanity's greatest achievements being auctioned off for pennies on the dollar.