Trump's Top Christian Dude Stopped A Tsunami By Yelling At It One Time, No Lie 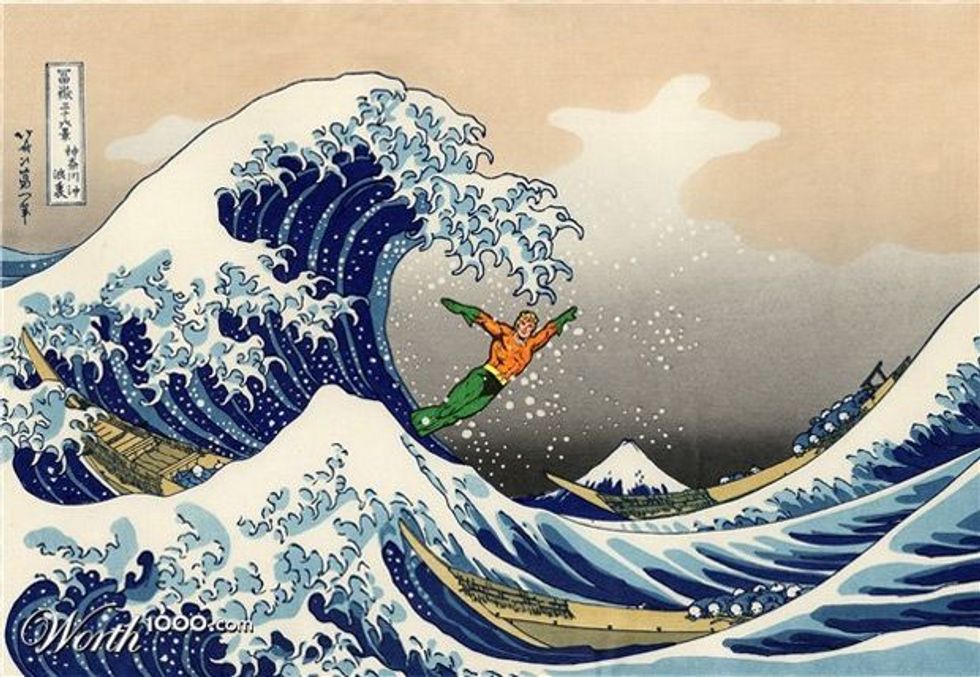 Donald Trump is, as we all know, the biggest Christian to ever run for president, because he even thinks the Bible is an even better book than The Art of the Deal. So it should be no surprise that he has chosen as his "liaison on Christian policy," which is a job that every campaign has these days, one seriously righteous dude: Frank Amedia, who isn't merely a televangelist, but is an actual faith healer who has cured cancer with prayer and even stopped the 2011 Japanese tsunami from hurting anyone. In Hawaii, at least. Guy's an apostle, a prophet, and a miracle worker, but apparently only licensed to do miracles in the United States and Territories. Sucks to be you, Iwate prefecture. God's a bit of a stickler about jurisdiction, so it's kind of a bummer about the nearly 16,000 deaths in Japan, but that takes nothing away from Rev. Amedia's achievement in preventing tsunami damage 4000 miles away.

Mother Jones tells us a bit more about what a swell God guy Trump has recruited for his team:

Amedia is a former Jew who says he found God through an encounter with Jesus in 1980. He runs the Ohio-based Touch Heaven Ministries, an international ministry with affiliated churches in Africa and Asia, and he is a frequent presence on Christian TV networks. He appears daily on the evangelical Daystar network and occasionally on the Trinity Broadcasting Network and the North American version of Isaac TV, a Pakistan-based evangelical network that airs Christian broadcasting across several Asian countries.

"Isaac TV" is a terrific little network, best known for its "Punk'd"-style prank show, "Dad, What Are You Doing With That Knife?"

As an actual prophet and apostle, Amedia has regular chats with Jesus, and in 2012, he shared with the Trinity Broadcasting Network his exciting story of how he protected Hawaii through the power of prayer alone:

After first pointing out that there was nothing that could have saved all those people in Japan, because he was asleep at home in the USA when the earthquake hit, Amedia gets to the exciting part where he stopped the tsunami 4000 miles later as it approached a Hawaiian island where his daughter was visiting.

I stood at the edge of my bed and I said, "In the name of Jesus, I declare that tsunami to stop now." And I specifically said, 'I declare those waters to recede," and I said, "Father, that is my child, I am your child, I’m coming to you now and asking you to preserve her." Apostle, it was seen by 400 people on a cliff. It was on YouTube, it was actually on the news that that tsunami stopped 200 feet off of shore. Even after having sucked the waters in, it churned and it went on and did devastation in the next island.

Sucks to be the people on that next island, who didn't have a dad in the propheting business. God is a pretty cool guy, saving Amedia's daughter like that. Also, we suppose it might be worth noting that while the tsunami did do an estimated $30 million in damage all over the Hawaiian islands, we haven't seen a single news report of the 2011 tsunami halting at one island and devastating the next. Probably covered up by atheists in the media.

Amedia also does faith healing, according to MoJo, but you can't see it because it's a secret between him and God:

In an undated Isaac TV broadcast, Amedia engages in faith healing, trying to assist people with jaw problems, bleeding teeth and gums, ringing in their ears, tongue cancer, and parched lips. None of those healed are seen on screen. In the same broadcast, Amedia says AIDS is caused by "unnatural sex."

Donald Trump Rejects Chuck Todd's 9/11 Reality, Replaces It With His Own

We can see why Donald Trump would be a fan. Amedia does faith healing that takes place offscreen, and stops tsunamis on live TV, although he didn't actually bring a recording with him. It's on YouTube somewhere. It makes sense he'd find a patron in the guy who knows he saw Muslims dancing in the streets on 9/11, in TV coverage that there's no record of whatsoever.

You only have to believe.