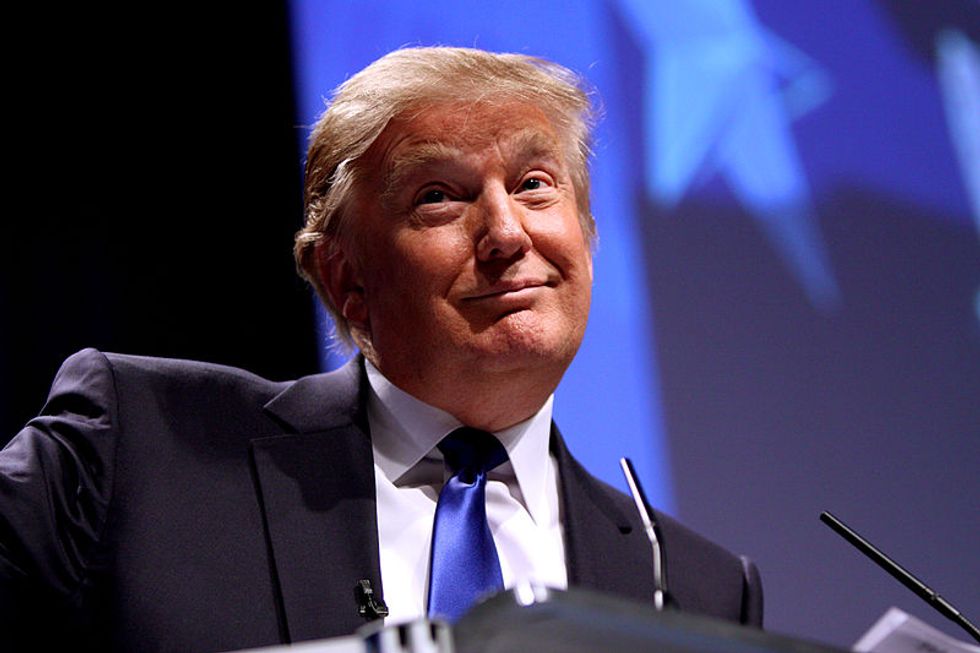 It’s been roughly twenty minutes since our boy Donald Q. Worthington Trump has been in the news, so here’s some background in case you’re unfamiliar with the underreported saga of everyone’s favorite honey-tinted quaff:

The Donald is a businessman who owns pretty much everything you could imagine owning. Trump is also a popular dissident against a government so radically Socialist it prevents people from being free and owning things. He mastered the art of smelling Kenyans in the late '90s atop a mountain in Nepal, huddled around a stack of King magazines while sniffing sample patches of sandalwood cologne. Since then he’s achieved enlightenment, reaching the level of MASTER BIRTHER. And he would have been President too, if it weren't for those meddling kids and their stupid dog.

So what’s The Donald up to now? Sticking it to the LIBRIL FASCISTS by ignoring those pesky and oppressive laws that require restaurants to serve people safe food, that’s what! Sure, the Trump International Hotel in Las Vegas had its steakhouse shut down temporarily after logging 51 health code violations during a regular inspection, but can youprove they weren't planted by the Obama cartel? Besides, we’re positive it’s still the best place on The Strip to mumble about government takeovers with a mouth full of moldy yogurt. Five stars for that, right?

While ready-to-eat food can be stored for up to seven days, inspectors at DJT reported finding the old caviar and yogurt, duck that dated back to June, veal stock and tomato sauce that was almost two weeks old, and expired peanut dressing and black bean chili.

Inspectors found no measures to destroy parasites in undercooked halibut and salmon, and noted that raw tuna was being improperly thawed. Icicles were found in a faulty freezer.

NOT THE CAVIAR! Why is Donald Trump class-warring like that??!?1!

Maybe the food could be a little more, well, fresh, but these issues wouldn't exist if ObamaCare hadn’t violently murdered half the restaurant’s staff in their sleep. Why, before ObamaCare you could hire twenty people just to check expiration dates in your restaurant – that shit is hard, and without dedicated staff to give labels a cursory glance and throw out outdated material, we’ll likely all be stuffing our faces with expired meat and tainted dairy any day now. No restaurant is safe –- if a TRUMP establishment isn’t immune, you have to expect a thousand years of Obamacare darkness at your local Denny's and Applebee's to begin at any moment.

Luckily, the restaurant was able to restore its “A” grade and resume operation within a few hours, so Trump can continue to focus on the Kenyan spotting and calculated pouting that will pave the way for his White House run in 20LOL.