Hey, Remember When Tucker Carlson Beat Up That Gay Dude In The Bathroom? 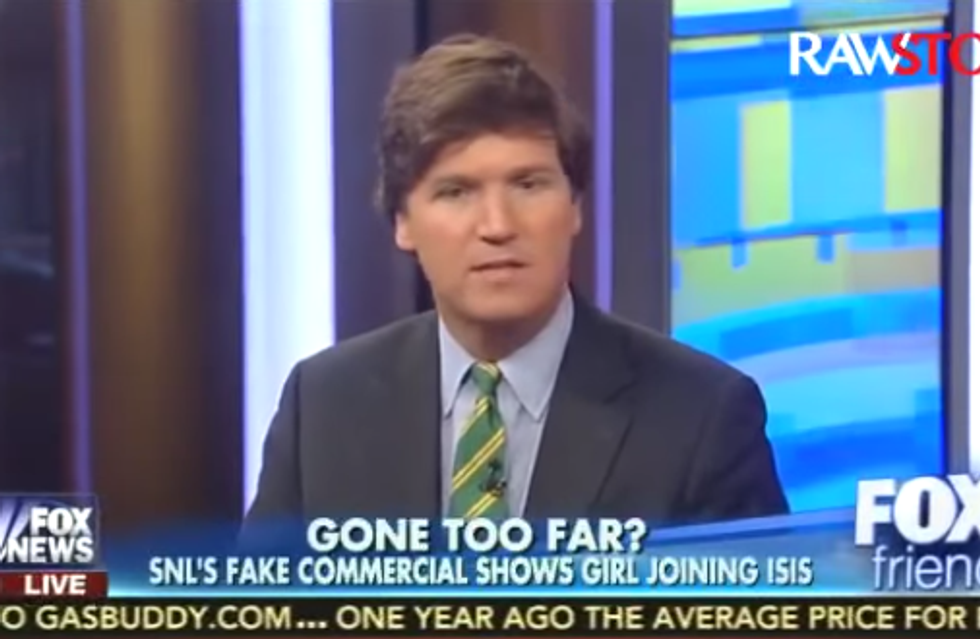 This piece has been UPDATED, because this is a post about Tucker Carlson being creepy about transgender people in bathrooms, and we are smacking ourselves on the face and on the bottom, because we forgot to talk about that in the context of the time Tucker panicked and beat up a gay in the bathroom at Georgetown, we are A Idiot and We Are Fired! More on that icky story in a moment.

So, "Saturday Night Live" made a joke this weekend about ISIS, about how there is apparently an EPIDEMIC of American Girls joining up to say "Death to America!" -- probably because Hunter didn't call them back. That's what I would do, if Hunter failed to call. (Hunter! What happened?! Gonna go terrorist up some stuff now.)

And Tucker, the silly little man who is inexplicably employed as a journalist, is upset about SNL being mean to ISIS, because that's just TOO FAR, BRO, TOO FAR! And making jokes about Our Enemies is probably a bad idea, he thinks. Know what Tucker woulda done? Beat the shit out of another gay dude in the bathroom? No, but he thinks it would be great if SNL beat the shit out of the transgenders, for the way they're always using everyone else's potty:

“I’m kind of for comedy that goes as far as it can,” Carlson said. “But I always feel like with shows like SNL and comedy in general, it does stop short of the sacred cows on the left.”

“I would love to see an SNL sketch like making fun of transgender bathrooms, for example,” he added. “You will never, ever see that. Why? Because it’s just too far. There actually is a line, it’s just a different line than most of us perceive.”

SHOULD WE mock ISIS? I mean, either they are a gross little band of murderous assholes, or PERHAPS  they are going to take over America, should we make fun of our new captors? Too early to tell! Or um, maybe yeah, we should mock them, because they're terrible and even Iran is on our side over the whole ordeal, I dunno, this stuff is probably really tough for Fox News employees, y'all don't even know what to believe anymore. Black President vs. Islamic Terrorists? Can we just vote for the risen Christ Ayn Rand to give us some snuggle time, from her smelly unwashed atheist armpits, and maybe eat some Handi Snacks afterward?

Apparently, though, Tucker is one of those guys who dick-checks every dude he sees at the urinal, and maybe the people in the stalls, we dunno, we don't feel like we need to make sure nobody in the potty is transgender, apparently it doesn't threaten your GAYEST Wonkette's manhood quite as much as it does for TUCKER, who, again, seems to have PROBLEMS in this area.

What kind of problems? The thing we completely forgot due to early onset senility, is that years back, some guy hit on Tucker in the bathroom at Georgetown, and instead of just going "oh that is nice, there is a creepy gay in the bathroom who thinks I am the SEXXX," and zipping back up and going to gross somebody else out by being a smug creep in his own right, Tucker went back with some dudebro friend of his and beat the shit out of the guy. He said this, on the teevee, and was laughing about it. So, uh, Tucker is a little bit shy when it comes to having to use the bathroom in public, it seems that he feels very threatened by it.

And yes, Tucker, we agree that comedy should go as far as it can, but the rest of the "most of us" actually do not think that "trannies in the potty" is quite as funny as you do, especially because "trannies" is not the word you're supposed to use, not even a little bit.

When conservatives say shit like that, it is because they are really scared that a transgender person is going to come into the potty and see their small dick. But normal people (REPUBLICAN OR DEMOCRAT! but not Tucker, because he is a weenus) actually do not go to the potty to study their fellow travelers' genitalia. But seriously, Tucker, it's not us, it's you. Weird folks like you and the people you hang out with might think it's funny to make fun of transgender people who have to go to the bathroom, but actual normal Americans are quite aware that transgender people are not using their preferred bathrooms for Larry Craig purposes, they are in there to pee, or maybe poop, when one of those times happens when they just can't avoid it, and they are going back to their friends and saying "PEE YEW, I feel sorry for the person, NOT MY TRANSGENDER SELF, that just had to poop in there!" Yep. They pooped. They totally trans-pooped. And they are trans-LYING to their friends about it. RUDE.

And that's it. Shut up, Tucker Carlson.