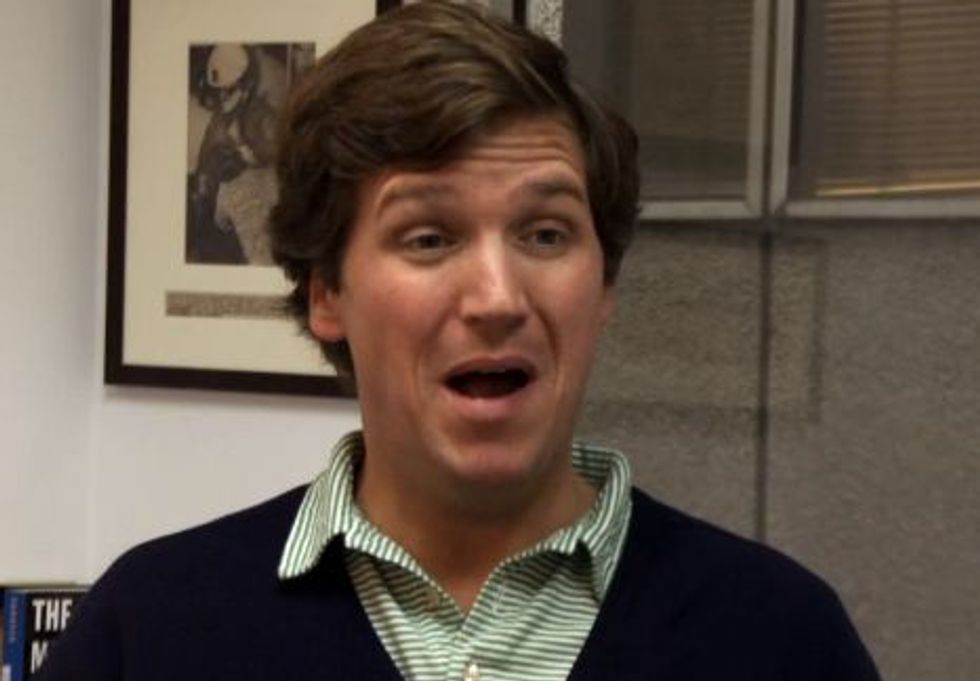 Tucker Carlson's "O" face when he learned of his promotion

What an exciting week for terrible, sexist, racist, homophobic dork-ass Tucker Carlson! Fresh off the news that Megyn Kelly is leaving Fox News to spend more time with her family, halfway normal TV people at NBC, and also her smokin' hot husband (have you SEEN HIM?), we learn that Tucker is getting promoted from his 7 PM time-slot all the way up to Megyn's current 9 PM slot. Hooray for failing upward!

[wonkbar]<a href="http://wonkette.com/609757/the-eight-best-times-this-badass-teen-vogue-chick-kicked-tucker-carlson-in-the-nads"></a>[/wonkbar]Wonder what it was that gave the Fox execs the idea that Tucker was a good boy ready for a promotion! Was it when Teen Vogue writer Lauren Duca gutted and filleted him on live TV, even as he lobbed sexism at her face repeatedly?

Was it when he cried on TV about how Sports Illustrated was putting too many chunky chicks in its swimsuit issue, which made it very difficult for him to get hard and rub one out during bathroom breaks at work?

[wonkbar]<a href="http://wonkette.com/598797/tucker-carlson-doesnt-want-to-wank-to-fat-chicks"></a>[/wonkbar]What about when his already flaccid, broken dick somehow shriveled up and died even more bigly, because Wonder Woman's pants are too long?

Was it when his sexist boner came RIGHT THE FUCK BACK when he found out this one sexy L'Oreal model lady murders exotic gazelles, on big game hunting trips?

[wonkbar]<a href="http://wonkette.com/580802/tucker-carlson-and-brother-buckley-double-team-lady-in-most-sexist-bullsht-weve-seen-today"></a>[/wonkbar]Was it when he and his also sexist and somehow less attractive brother Buckley tag-teamed the New York mayor's spokeslady with sexism and verbal abuse, because the little lady had the audacity to complain that the Daily Caller, Tucker's internet home for premature hate-jaculation, had published an article that was factually incorrect? (Check out what THAT LADY had to tweet about news of Tucker's promotion.)

Was it when he whined on TV about how we really need to stop pretending "statutory rape" even exists, if the "victim" is a teenage boy, because COME ON BRO, IF TUCKER HAD GOTTEN SOME STRANGE FROM A TEACHER WHEN HE WAS IN HIGH SCHOOL, WHOA THERE, TUCKER'S JIZZIN' UP THE SCREEN AGAIN, WITH HIS FANTASIES!

Was it when his reaction to the Charleston massacre was that if that black president Nobummer thinks guns are so bad, maybe we should take the Secret Service's guns away, because HAW HAW HAW GET IT?

[wonkbar]<a href="http://wonkette.com/578023/tucker-carlson-does-not-care-for-isis-jokes-would-prefer-mocking-the-transgenders"></a>[/wonkbar]Were the Fox brass just really impressed with that story Tucker loves to brag about, when he allegedly beat up a gay dude in the bathroom?

Is it the keen sense of humor Tucker exhibited when he bitched and moaned for an entire segment about how mean "Saturday Night Live" was for doing a funny sketch about a girl joining ISIS, and openly wished the show would do something that would tickle HIS funny man-bone, like maybe mock transgender people?

Shall we go on? Or have we painted an adequate picture of what a slimy, perverted bag of dicks Tucker Carlson is?

How nice, that this guy, the one we just described, will be taking a time-slot (haw haw, Tucker, we said "slot" again) from Megyn Kelly, a woman who spent the entire last year and a half fending off sexist attacks from the impotent supporters of President-elect Donald Trump, whose campaign really got going when he accused her of having violent periods at him while she moderated a Republican primary debate. (TO BE CLEAR: Megyn Kelly is no angel. But this post is about Tucker Carlson.)

Maybe Fox just decided, hell, Tucker Carlson's ratings are really good at 7 PM (where he replaced another lady, Greta Van Susteren), and, in the wake of the network's chief resigning over sexual harassment allegations, figured if its long track record of sexism and general badness hasn't yet turned off the washed-up misogynist viewers who've kept 'em afloat all these years, why mess with a good thing?

But let's look for the silver lining! A known lady-haver of lady-parts, Martha MacCallum, will be taking Tucker's 7 PM time-slot, so she can do a hagiographic "news" thingie on President Puss-Grab's first 100 days in office, oh wait that's not a silver lining, sorry, our bad, fuck it.