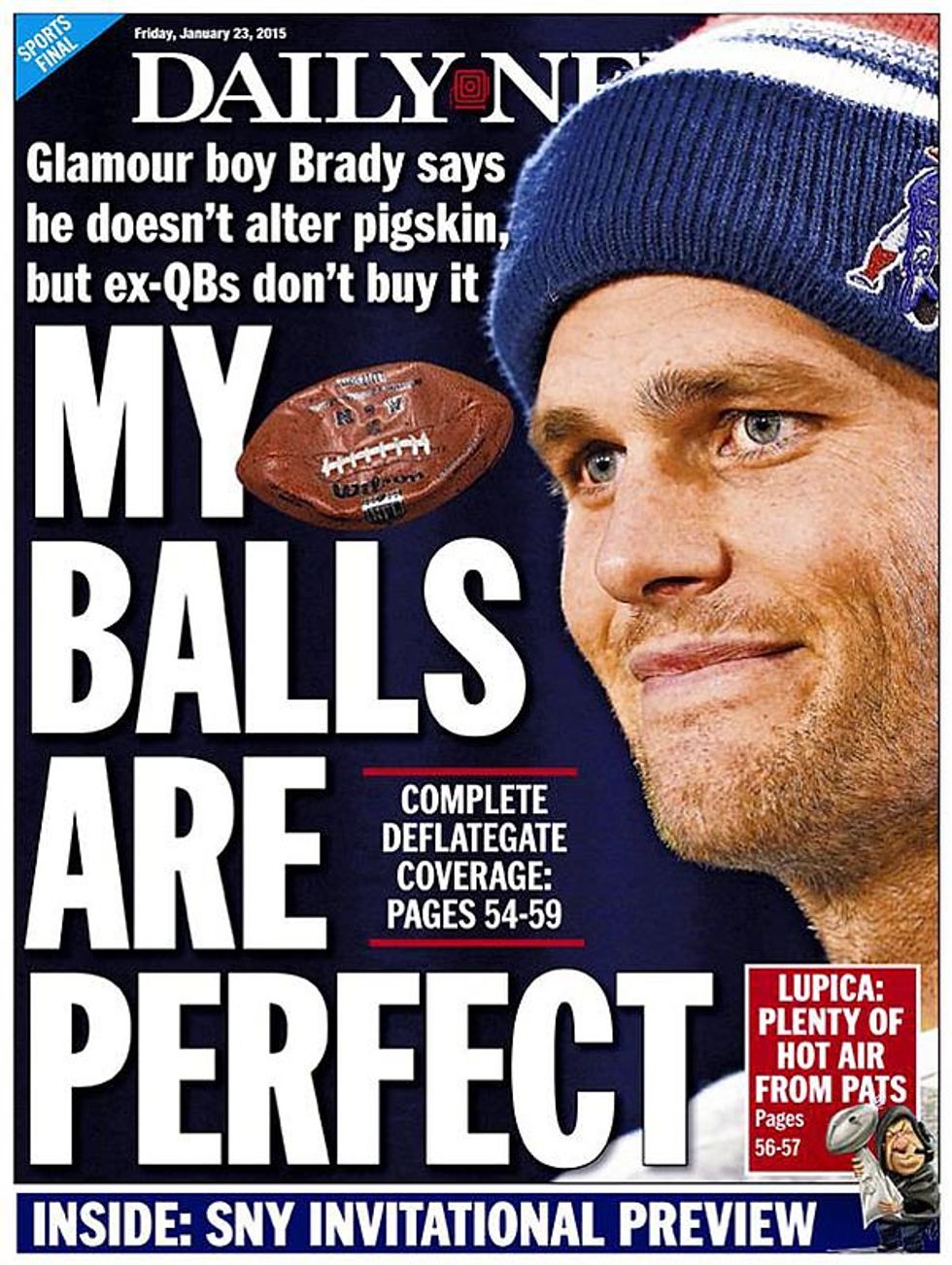 I mean, aside from the obvious jokes, all of which were exhausted early last week, what’s the point? Did Tom Brady cheat? Sure, maybe. Look at the guy. And no less an authority than bow-tie wearer/creationist troller/Great American Hero Bill Nye thinks something is amiss. And the Patriots have something of a reputation for this sort of thing, we gather. Even if there’s some sort of related sporting event that bookends the big Katy Perry concert this Sunday, we’re finding it difficult to muster anything approaching a damn. After all, did anybody really expect the National Fucking Football League to be the paragons of ethics and honesty? Seriously?

But then we saw this headline, from (where else?) Tucker Carlson’s Internet Tendency: Tom Brady And The Liberal War On Success

But for the rest of you, the mob salivating over the prospect of finding something to diminish the Patriots’ 2014 achievements, let’s face it. You hated Tom Brady before the national media lost its collective mind over the air pressure in footballs. You hated Tom Brady before Spygate. Your hatred of Brady goes back much further than that. You despised him in high school, when you wanted to sit with the jocks in the cafeteria. You detested him when he was dating the cheerleaders. You loathed Brady when he upset your team in the Super Bowl. You screamed with rage when he dissected your team’s secondary like a surgeon and exposed the Swiss cheese-like holes in your coverages. You were outraged when he didn’t come out of the game after throwing at least four touchdown passes. Then when he married a supermodel? Game over.

Tom Brady is a winner. He has won 76.5 percent of the games he has started. He has been to the AFC Championship the majority of seasons he has played. He has three Super Bowl rings. He is about to make his sixth appearance in the big game.

A certain amount of jealousy is human nature. But the contempt for Brady’s sustained success goes beyond that. It’s a larger liberal war against success, based on the sentiments expressed by the senior senator in the Pats’ home state, Elizabeth Warren, and then later repeated more pithily by Barack Obama.

All those records? Tom Brady didn’t build that. Success cannot be earned, the game must be rigged. […] The same politics of envy that liberals exploit to make some people crave tax increases on the wealthy has turned you against the winningest quarterback of our time, a hero to the blue-collar and culturally conservative parts of the Bay State, a true Patriot.

Tl;dr: You dumb liberal fucks hate Tom Brady because you are jealous that he is richer and more famous and fucks a hotter woman than you do, and that is why you care that he is a big fat cheater, which does not matter because he is successful, so get over it, haters.

Which, come to think of it, is the perfect encapsulation of the entirety of modern American libertarianism, at least of the vapid Daily Caller variety.

Believe it or not, W. James Antle III did not produce the very best and most epic Ballghazi word salad. No sir, that honor belongs to NFL Network analyst Heath Evans, who believes Tom Brady’s Deflated Balls is just like creationism, because reasons:

Sometimes the science and even Bill's verbage [sic] was hard for me to follow. I'm listening to him and I'm thinking about the creation theory versus evolution. You've got a scientist that used the same science to prove creation as the other. You can have a same scientist who studied at the same school would say no, he's wrong and another one would say he's right.

For context, Heath Evans is the product of a fundamentalist Christian high school. In Florida.