Tulsa Cop *Might* Not Even Get Away With Murder! 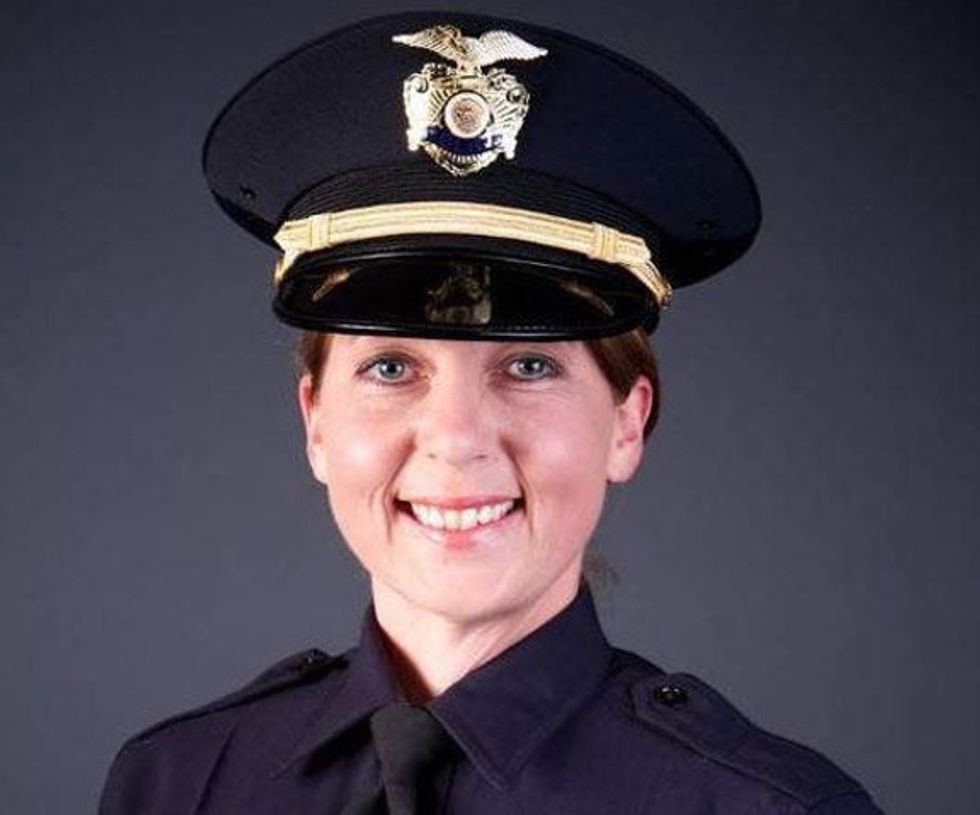 We aren't sure we'd have predicted this earlier in the week, but Tulsa police officer Betty Shelby has been charged with first-degree manslaughter in the shooting death of Terence Crutcher last Friday. Shelby shot Crutcher after his SUV broke down in the middle of a road; video showed he had his hands up and did not appear to be making any threatening movements. Shelby's attorney had claimed it was a justified shooting since Crutcher was uncooperative; that didn't impress Tulsa County District Attorney Steve Kunzweiler, though:

A court filing by prosecutors said Shelby “unlawfully and unnecessarily” shot Crutcher because he was refusing to comply with her orders.

Shelby “reacted unreasonably by escalating the situation”, according to an affidavit from Doug Campbell, Kunzweiler’s chief investigator, who alleged that she became “emotionally involved to the point that she overreacted”.

We could maybe wish the affadavit didn't makes it sound quite so much like Cambpell is saying Shelby was a hysterical lady who panicked, as women will do, but perhaps he would have said the same of a male officer?

The charging affidavit said Crutcher walked toward the officer, who asked him if the vehicle belonged to him. “He was mumbling to himself and would not answer any of officer Shelby’s questions,” it said.

Crutcher allegedly kept putting his hands in his pockets. After being ordered to show his hands, Crutcher began walking toward the vehicle with his hands held up while ignoring orders from Shelby to stop.

Authorities initially claimed Crutcher had also refused to obey Shelby’s commands to put his hands up. Dashcam video footage, however, showed Crutcher with his hands in the air moments before being shot.

Will you just imagine that -- the video showed something different from the cop's report. We bet that hardly ever happens.

[wonkbar]<a href="http://wonkette.com/583452/tulsa-pretend-cop-enters-plea-takes-bahamas-vacation-like-any-other-manslaughter-suspect"></a>[/wonkbar]Kunzweiler successfully brought second-degree manslaughter charges last year against pretend deputy Robert Bates, who shot and killed a black suspect when -- Bates claimed -- he accidentally grabbed his pistol instead of his Taser. The Guardian notes "Bates was found guilty earlier this year and has been sentenced to four years in prison."

Officer Shelby turned herself in at 1 a.m. Friday, was booked, and then was released on a $50,000.00 bond after about 20 minutes. The Tulsa PD has not made a decision yet on Shelby's "employment status," pending an internal affairs review.

In a detail we hadn't previously seen, Crutcher's family says it's impossible for Crutcher to have been reaching inside his SUV's driver's-side window when he was shot, as Shelby had claimed:

Crutcher's family attorneys maintain that the window was up, pointing to the blood spattered on it when he was shot.

But maybe he rolled it up while he was dying? We can hardly wait for the amateur forensics experts in website comments sections to explain that one.

An attorney for the Crutcher family, Damario Solomon-Simmons, said in a press conference,

"We are happy that charges were brought ... But, let me be clear. The family wants and deserves full justice, and full justice requires not just charges but a vigorous prosecution and a conviction to those who shot and killed Terence for no reason" [...]

Crutcher's twin sister, Tiffany Crutcher, said she was "grateful" that "the officer who senselessly killed" her brother "will face charges for her criminal act."

"Our goal as a family is to ensure that this never happens to an innocent citizen," she said, adding that she's "humble" and "grateful" to the community for their support.

Meanwhile, in Charlotte, North Carolina, authorities are refusing to release dash cam and body cam video of Tuesday's police shooting of Keith Scott, 34, although Scott's family has been allowed to see the two videos and is calling for them to be released to the public. Police say Scott was armed with a gun, and have a pistol that was recovered at the scene, but his family and other witnesses say he was holding a book he'd been reading while waiting in his car to pick up his son from the school bus. The Scott family's attorney, Justin Bamberg, said the video did not show Scott behaving aggressively toward officers:

“When told by police to exit his vehicle, Mr. Scott did so in a very calm, nonaggressive manner,” Mr. Bamberg said. “While police did give him several commands, he did not aggressively approach them or raise his hands at members of law enforcement at any time.” When an officer opened fire, he added, “Mr. Scott’s hands were by his side, and he was slowly walking backwards.”

Both Bamberg and Charlotte Mecklenburg Police Chief Kerr Puttney said the video was not clear enough to show what, if anything, Scott had in his hands when he was shot, and Puttney said the videos did not show "absolute, definitive visual evidence that could confirm that a person is pointing a gun." Nevertheless, Puttney will not release the video.

Yr Wonkette is neither an attorney nor a policing expert, but we'd point out that after Tulsa police released the video of Crutcher's shooting, there were demonstrations, but no clashes between police and protesters, while Charlotte has had three nights so far of demonstrations, with demonstrators being tear gassed, shot at with rubber bullets, and one man dying after being shot in what police claim was a "civilian on civilian" shooting. Could be there's something to be said for transparency and communication after a police shooting, rather than creating the impression police are hiding evidence. To make matters worse, a new state law in North Carolina will make release of police video even more difficult after October 1 -- which will make communities even less likely to take the police's word for what happened in this and future shootings (and there will be).

Kids, there's your compare and contrast assignment for the week.