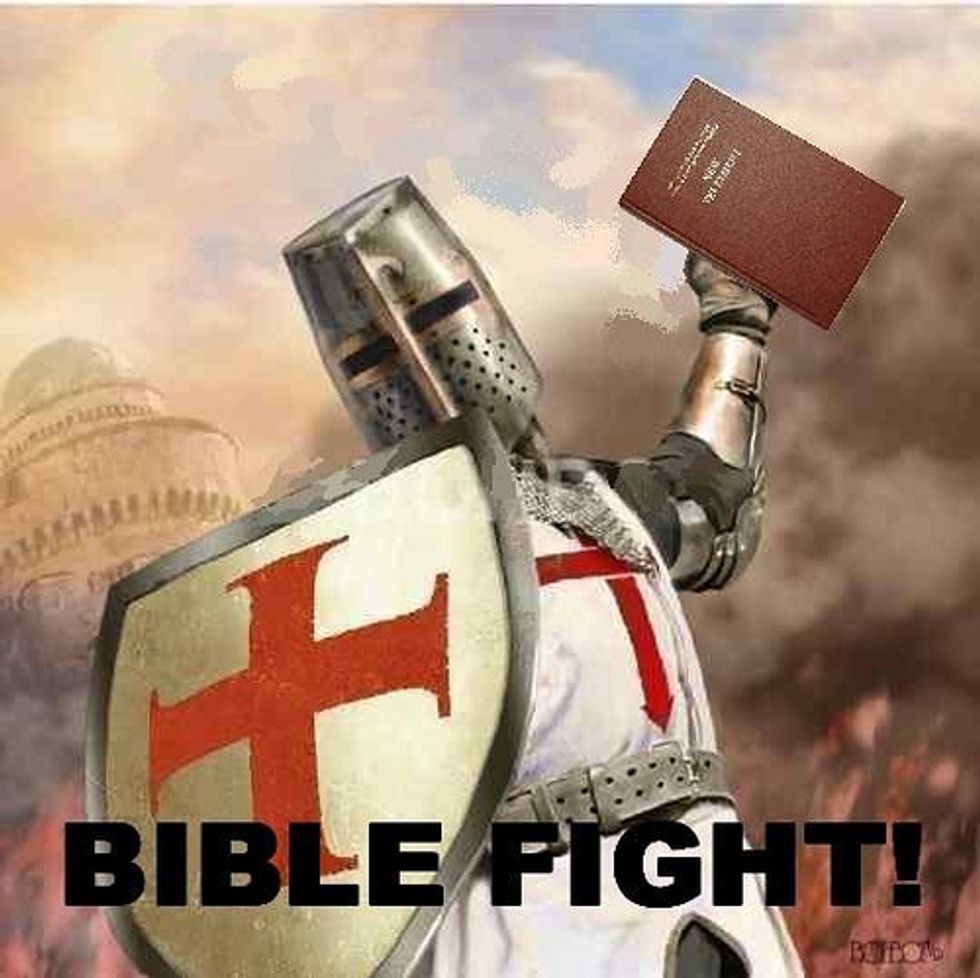 In Cartersville, Georgia, a discussion of the Ten Commandments got a little heated over the weekend, leading to aholy smackdown in a local hotel:

According to police reports, Carolyn Unfricht and Daniel Camarda were inside a Cartersville hotel arguing about the Bible and specifically the Ten Commandments

Unfricht told police things got heated when she hit him across the face with her Bible. Camarda retaliated by throwing her across the room.

Both are now facing battery charges and not surprisingly, the police report states they were "highly intoxicated" at the time of the arrest.

There are just too many unanswered questions here! Which commandment(s) set them off? Or for that matter, which version of the Ten Commandments? What exactly was the nature of the dispute? It is times like this that we find the lack of detail in local news stories rather disappointing.

The Atlanta Journal-Constitution provides a few additional details, but they are of the pugilistic, not the theological variety:

Unfricht told the officer that the conversation “became heated” and she hit Camarda across the face with a Bible she was holding. The blow left a mark on Camarda’s face and broke his glasses.

Unfricht said Camarda “slung her across the room,” where she hit the television and a table, according to the report. She sustained a cut to her head and injured her right foot.

When the officer asked Camarda what happened, he said Unfricht hit him with the Bible, but her injuries were sustained “when she fell down,” the report says.

It's never the flight across the room that hurts. It's the landing.

Was this perhaps a case of turning the other cheek taken to extremes? In this account, we see that Ms. Unfricht was also charged with trespassing, so was the "discussion" of the commandments perhaps related in some way to the reason that Mr. Camarda was at a motel at 1 AM? We don't even know whether the two are Protestant of Catholic, so will they need to go to confession, or will grace alone be all they need for forgiveness? Was either heard to scream, "you scumbag, you maggot, you cheap lousy faggot, Happy Christmas your arse, I pray God it's our last"? As the priests always said when they couldn't answer a theological conundrum, it's a Mystery.

Ultimately, it's just a lucky thing that no one ended up with 95 theses nailed to their forehead.

Follow Doktor Zoom on Twitter. He will gladly debate the Hitchhiker's Guide to the Galaxy, provided all participants wear gloves and headgear.