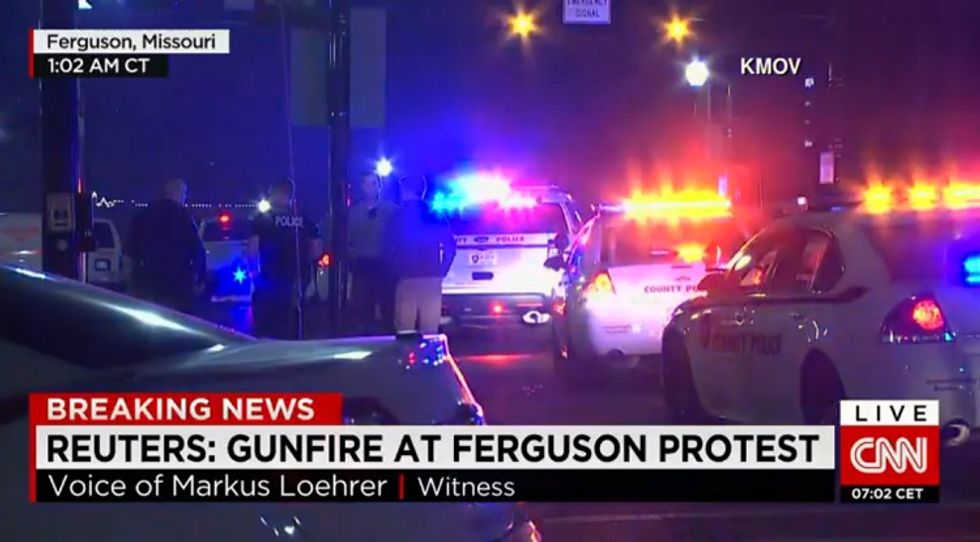 Two police officers were shot in front of the Ferguson, Missouri, police department early Thursday morning. The shootings occurred hours after Wednesday's resignation of police chief Tom Jackson, as protesters near the police department called for additional resignations in Ferguson city government. One officer was shot in the face, the other in the shoulder. Both were hospitalized with injuries that were described as very serious but not life-threatening. The shootings occurred shortly after midnight as the protests appeared to be breaking up.

The St. Louis Post-Dispatch cited several witnesses who said that the shots came from somewhere behind the remaining protesters:

Witnesses said the shots appeared to come from the direction of a block of homes on Tiffin Avenue that intersects South Florissant Road, where the police department is located.

Bradley Rayford, a freelance journalist who has been reporting from Ferguson since the unrest began there last summer, said he saw three or four muzzle flashes from the crest of Tiffin Hill, a residential neighborhood with large century-old homes.

He was in front of the police line on South Florissant at the time. He said he couldn't tell if the shots were being fired from a vehicle.

St. Louis County Police Chief Jon Belmar has already responded with his characteristic coolheadedness. In response to a reporter who asked, "To be clear here, this is not the people who were exercising their first amendment rights who did the shooting?" Belmar figured that the protesters had to be involved somehow: "I don't know who did the shooting to be honest with you right now. But somehow they were embedded in that group of folks."

Belmar also acknowledged that he had not been at the scene, but emphasized that the victims had been targeted solely because they were police officers, even though police do not yet have any suspects.

Another witness, Markus Loehrer, told KMOV that he thought the shots came from a "grassy area behind the Subway, so nowhere near the protestors."

Whatever happened, we can probably all agree that it's all ultimately the fault of Barack Obama and Eric Holder.