Tyrant Hillary Clinton Will Haul All Americans Off To Voting Camps 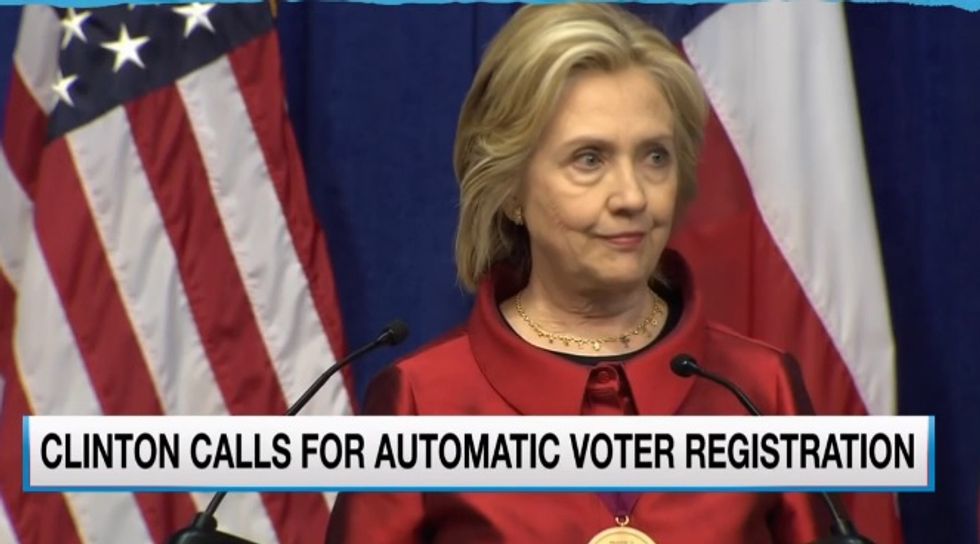 Hillary Clinton pleasantly surprised the hell out of us Thursday by calling for every American to be automatically registered to vote at 18, following the lead of Oregon, which passed universal registration earlier this year.

In a speech at Texas Southern University in Houston, Clinton took a shot at Republicans who have been "systematically and deliberately trying to stop millions of American citizens from voting," and said they should "stop fear-mongering about a phantom epidemic of election fraud" in the pursuit of laws that deliberately make it more difficult for poor and minority citizens to vote. She said that all states should instead make voting as easy as possible and called for a national standard 20 days of early voting, including evenings and weekends. Not surprisingly, a lot of rightwing pundits don't see what that big deal is. Why on Earth would you want everyone to vote anyway, since so many voters would be uninformed on the issues?

We gotta say, we like this Hillary and what looks like an attempt to run as an actual Democrat. Of the rash of voting restrictions passed in states like Wisconsin,North Carolina, and Texas, Clinton said,

All of these problems voting just didn't happen by accident ... And it is just wrong -- it's wrong -- to try to prevent, undermine and inhibit Americans' right to vote.

At the Republican Party's pet cable network, Fox News, "The Five" was Not At All Pleased and said Hillary isn't addressing a real problem because no one ever has trouble accessing polls; she's just pandering to her base:

"This issue of voter's rights, it is...talk about a phantom issue," said Dana Perino. "Asked about specifics, she probably couldn't have come up with any, but this will be something that Republicans...will be put on the defensive." Greg Gutfeld wondered why anyone would care about voting when there's ISIS and "a crime wave" to worry about -- you know, what with all the blacks running wild, we guess. Juan Williams, clearly on his meds that day, said there are huge problems with access to the polls and that Clinton's speech was a smart move, and black people don't see voting access as a trivial matter. Ever the charmer, Gutfeld shot back, "I guess you're right. I'm not thinking about black votes. I'm thinking about American votes." Yeah, Juan Williams, why are you so divisive?

MSNBC's Joe Scarborough didn't see the big deal either, explaining that the whole idea that there's any actual suppression of black votes is just nonsense, because as a well-off white pundit and former member of Congress, he's never had a problem voting:

[T]hat's the silliness, though, is that we've heard for the past two presidential election cycles that the Republicans are demons and that they have put bars up around all the voting booths and they are chasing down black people and other minorities and doing everything they can to stop them from voting, and -- and Darth Vader is running around zapping any Democrat that might try to vote. And in these same elections, far from voter suppression, [it's] been the highest voter turnout that Democrats could have dreamed for, and especially among the very minorities who everybody was screaming -- just as a little political ploy, I mean, fearmongering -- the voting turnout was extraordinary among black voters, among Hispanics. And so, they do this every four years, Democrats, they try to gin up their base, and then they get much better turnouts than Republicans do.

Oh, sure, you might get the occasional Republican admitting that voting restrictions are designed to make voting harder for blacks, but that's all just a Democratic fear tactic. And if black people get angry about the restrictions and turn out to vote, well, that just proves there was never a problem with restrictions in the first place. Duh, don't you know how logic works? Scarborough never got around to explaining why those restrictions were necessary; all he knows is that if a big number of minorities are voting, then the ones who are kept away from the polls don't matter, do they?

And finally, on her radio show Thursday, Laura Ingraham saw what Clinton was up to: Trying to enfranchise lazy people!

What madness! You know how those lazy blacks are, with their rioting and their fixation on Star Wars, and maybe their working two jobs where they can't leave work for an hour (or six) on a Tuesday to go vote or they'll be fired. So lazy. If they really cared about voting, they'd get jobs in the media, which offer far more flexible hours than fast food, hotels, and Walmart.