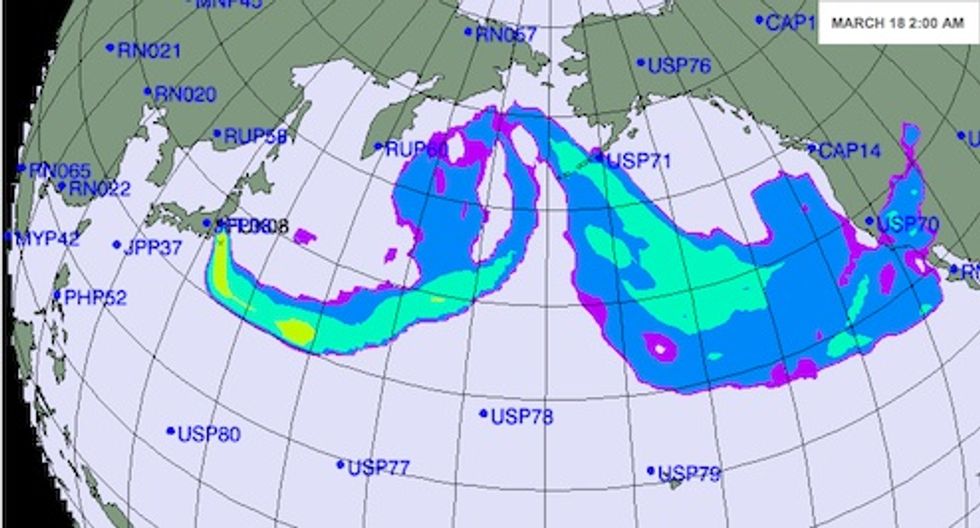 It has been nearly a week now, and the crisis in Japan only seems to be getting more terrible, so it's time for the world's religious people to start finding a deity to blame for the devastation in Japan! We long ago figured it was the Irish god, Saint Patrick, because it's his "Holy Week" -- but there are probably other theological opinions, on the the Internet. Let's do a quick news update about Americans evacuating while we wait for clarity.

But first, your random scientific-sounding NIGHTMARE SENTENCE from a new article in the NYT: "Western nuclear engineers have said that the release of mox into the atmosphere would produce a more dangerous radioactive plume than the dispersal of uranium fuel rods at the site." Awesome.

Now, regarding the State Department evacuation, from Foreign Policy: "The U.S. government offered to evacuate family members of State Department and Defense Department officials serving in north Japan as the nuclear crisis in the country risked spiraling out of control. The U.S. embassy in Tokyo will remain open, however, as U.S. officials supported the Japanese government's assertion that the city was still unaffected by the radiation released from the stricken nuclear power plant."

The growing freakout seems to show that Washington is a lot more worried about what's happening with the melting nuclear reactors than Japan's government will admit to, but everybody is being extremely calm and polite and we guess people will have to start glowing before we hear anything from, uh, our president. (He is busy with the college basketball on the teevee.)

As for Wonkette's Jack Stuef, he has bravely kept to his youth-slacker ethics by keeping utterly silent while he watches teevee in his hotel -- his travel writing and journalism have been limited to his Twitter, where he has spoken of lunch and shopping. But the State Department does know he's there!

Here's the radiation plume that will hit our western coastline at 2 a.m. tomorrow, according to the New York Times: