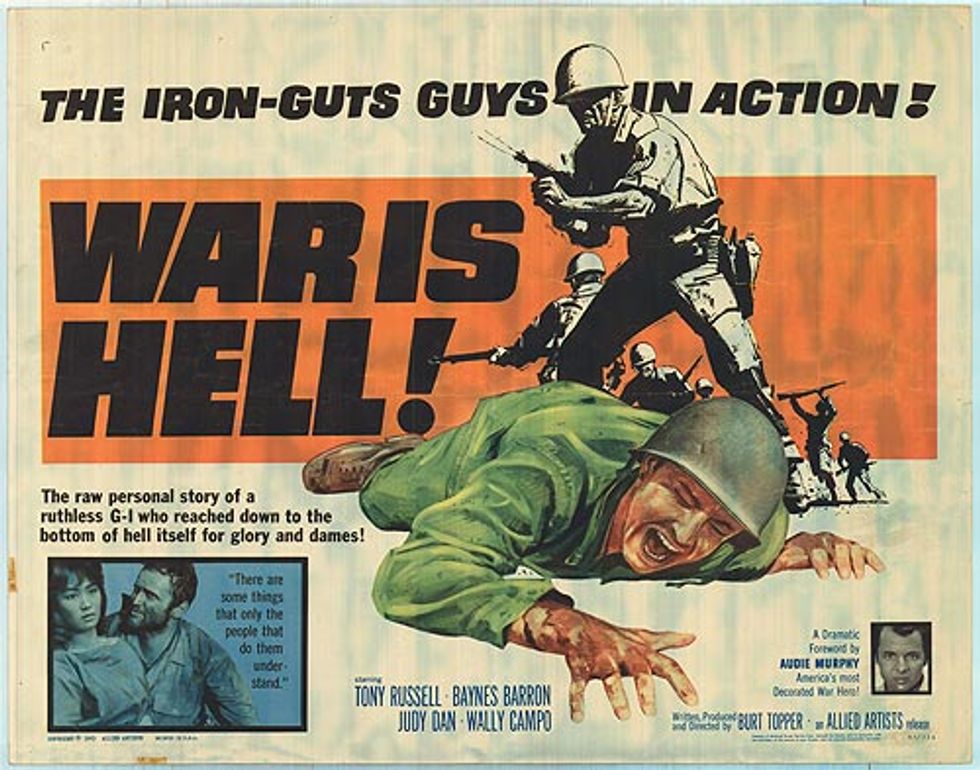 Here's a nice and horrifying story for you. The New York Times reports that in our completely necessary Freedom War in Afghanistan, the United States military has told soldiers and Marines to please ignore the fact that American-trained Afghan military and police leaders are forcibly fucking children on our military bases. Pay no attention to the sounds you're hearing and don't tell anybody, no way Jose. We're a bit at a loss as to whether this is just one of those Gruesome Realities Of War that we really, really wished we never read about, but hey, the story exists, so let's be grossed out together. And before you go "U.S. MILITARY EVIL BASTARDS," we want to point out that we're finding out about this because regular service members are speaking up and maybe losing their jobs and their lives over it:

In his last phone call home, Lance Cpl. Gregory Buckley Jr. told his father what was troubling him: From his bunk in southern Afghanistan, he could hear Afghan police officers sexually abusing boys they had brought to the base.

“At night we can hear them screaming, but we’re not allowed to do anything about it,” the Marine’s father, Gregory Buckley Sr., recalled his son telling him before he was shot to death at the base in 2012. He urged his son to tell his superiors. “My son said that his officers told him to look the other way because it’s their culture.”

Rampant sexual abuse of children has long been a problem in Afghanistan, particularly among armed commanders who dominate much of the rural landscape and can bully the population. The practice is called bacha bazi, literally “boy play,” and American soldiers and Marines have been instructed not to intervene — in some cases, not even when their Afghan allies have abused boys on military bases, according to interviews and court records.

Lance Cpl. Buckley was murdered in 2012 by an Afghan "tea boy" (a term used for these young boys who act as sex slaves and dancers for powerful men) who served an Afghan police commander by the name of Sarwar Jan:

Mr. Jan had long had a bad reputation; in 2010, two Marine officers managed to persuade the Afghan authorities to arrest him following a litany of abuses, including corruption, support for the Taliban and child abduction. But just two years later, the police commander was back with a different unit, working at Lance Corporal Buckley’s post, Forward Operating Base Delhi, in Helmand Province.

They lived in the barracks with the Marines, and the Marines knew what was going on. Mr. Jan has vehemently denied that any large harem of boys around him might be there for sexual purposes, oh my stars, no, but according to the Times, "people who know him say he still suffers from 'a toothache problem,' a euphemism here for child sexual abuse."

So. Bacha bazi. It's existed in Afghanistan since time immemorial. Similar things have been observed by American soldiers in Iraq. It's one of those cultural things that might be absolutely fucking repugnant, but it's been around since long before Americans started meddling in the Middle East and Asia, and it will probably exist long after we stop, LOL WE ARE NEVER GOING TO STOP, just kidding. It had basically been eradicated in Afghanistan, though, until 9/11 happened and America overthrew the Taliban. Because you see, under Taliban rule, it was punishable by death. But with the Taliban gone, it started right back up. Funny how that happens.

And that's where stories like this get splattered with a bunch of moral gray area. Was the Taliban fucking evil? Sure thing. But it was highly illegal to rape boys during that time. (It's technically illegal now, but since the perpetrators tend to be powerful men, people often just avert their eyes.) Was Saddam Hussein a really bad guy? You betcha. But his dictatorship kept in check the religious fighting and terrorism that, now unleashed, has given birth to ISIS.

Wonkette spoke to an Army Sergeant 1st Class who served a tour in Afghanistan starting in 2011, and he said these things are far more common than any of us would like to believe, and that it often comes down to the question of "mission creep": We're here to do A, B and C, and also we're observing these five other evil, fucked up things happening, but we can't do anything about it, can we? Can we eradicate a sexual practice that's been going on forever? Probably not. Is it right in front of our faces, when we're meeting with an Afghan commander we're arming and supporting in the fight against the Taliban, and a "tea boy" is right there in the room, attending to his master's needs? Yup, sure is!

As we mentioned above, there are American soldiers and Marines speaking up, and occasionally beating the fuck out of these child-abusing creeps, and it's putting their jobs in danger:

The reason we were here is because we heard the terrible things the Taliban were doing to people, how they were taking away human rights,” said Dan Quinn, a former Special Forces captain who beat up an American-backed militia commander for keeping a boy chained to his bed as a sex slave. “But we were putting people into power who would do things that were worse than the Taliban did — that was something village elders voiced to me.”

Quinn lost his command position in Afghanistan after that, and one of his colleagues who helped him out, Sgt. First Class Charles Martland, is in danger of losing his job entirely. The beating incident started when an Afghan woman came to them for help:

In September 2011, an Afghan woman, visibly bruised, showed up at an American base with her son, who was limping. One of the Afghan police commanders in the area, Abdul Rahman, had abducted the boy and forced him to become a sex slave, chained to his bed, the woman explained. [...]

She explained that because “her son was such a good-looking kid, he was a status symbol” coveted by local commanders.

They confronted Rahman and he admitted it. They tried to say, hey, you're working with the Americans here, and that is NOT OK. He reportedly laughed in their faces, so, in Quinn's words, "I picked him up and threw him onto the ground."

The source Wonkette spoke to told us that it gets weird, though, when you consider that, in Afghan society, some of the families are not like that Afghan woman, and in fact outright support the practice, as it brings them financial security. As to the patrons, our source says that to these men, having the prettiest young boy is like "showing off your new Mercedes." It shows their wealth and power.

And the American military is right in the middle of it, because we're liberating people or something. Read the full Times piece, assuming you have the stomach for it.