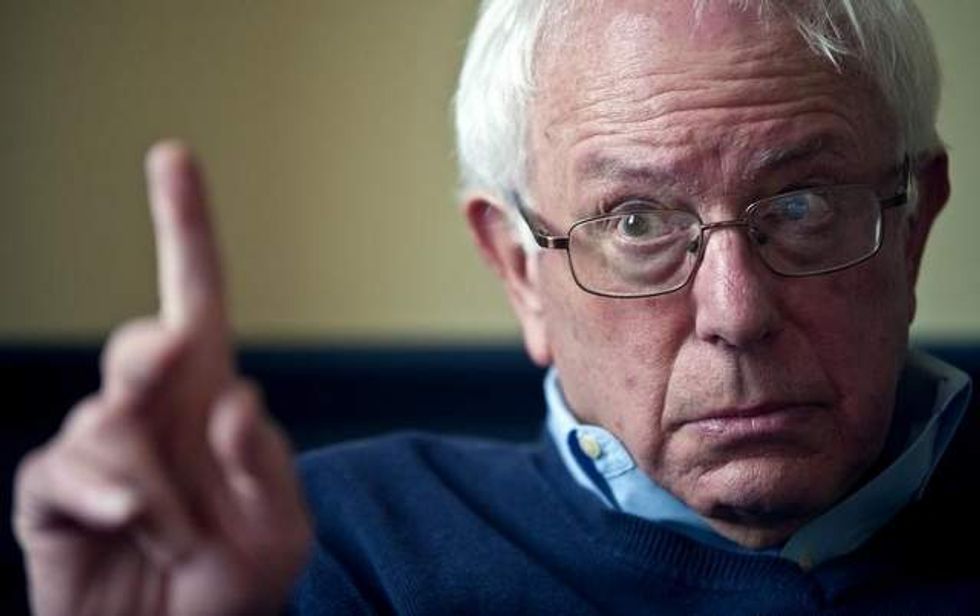 Sounds like he needs to SPLAIN some things to his campaign.

Operatives from Bernie Sanders' campaign have donned Culinary union pins and secured access to employee areas inside Strip hotels to try to garner votes for the Feb. 20 caucus, sources confirm.

Culinary officials have been made aware of the faux union workers at four hotels -- The Rio, Paris, The Mirage and Planet Hollywood. The Sanders campaigners are wearing the distinctive yellow Local 226 pins, implying they are union members, to gain access to employee dining rooms.

That is ... not good. For Bernie staffers to deceive union workers by basically COSPLAYING AS THEM is highly, highly OMG HIGHLY unethical, under any circumstances, and the union is NOT happy about it at all:

We can confirm multiple reports of Bernie Sanders’ campaign staffers attempting and gaining access to Employee Dining Rooms at Las Vegas Strip properties where over 57,000 members that we represent work.

We are disappointed and offended. It's completely inappropriate for any campaign to attempt to mislead Culinary Union members, especially at their place of work.

The Culinary Union button that hundreds of thousands of union members have proudly worn to work every day represents 80 years of struggle and fighting for justice. We strongly condemn anyone falsifying their affiliation with the Culinary Union in order to gain access to properties and we will cooperate with casinos and hotels so that this matter is fully resolved.

The Culinary Union has been very specific about how it has not endorsed either Hillary Clinton OR Bernie Sanders, by the way. The union DID endorse (Barack Obama) in 2008, and the ensuing battle was bloody. The Clinton campaign was accused of trying to suppress the Latino vote by filing a lawsuit to stop the union from caucusing inside casinos (where all those union members work). Meanwhile, the Clinton campaign stuck its nose inside the casinos to try to peel Obama-supporting union workers away, which was Not Allowed, and ugh, it was just bad.

Come on, guys. We know this is a competitive primary and people on both sides feel very strongly about their candidates. But one of the ways Democrats are supposed to be better than Republicans is that they're supposed to be more honest.

[contextly_sidebar id="oTdsWTYtDYacD7kV3H8sseyUd3VPGZfW"]We are certain the Sanders campaign is going to make heads roll over this, just like when they decided to "help" the DNC by snooping around in Hillary Clinton's voter database. Right?

Because we genuinely like BOTH candidates (Martin O'Malley, you do not exist) and we'd like this primary to remain focused on the important issues, like Bernie being a dirty communist and Hillary doing war-ghazi with Wall Street on her emails.