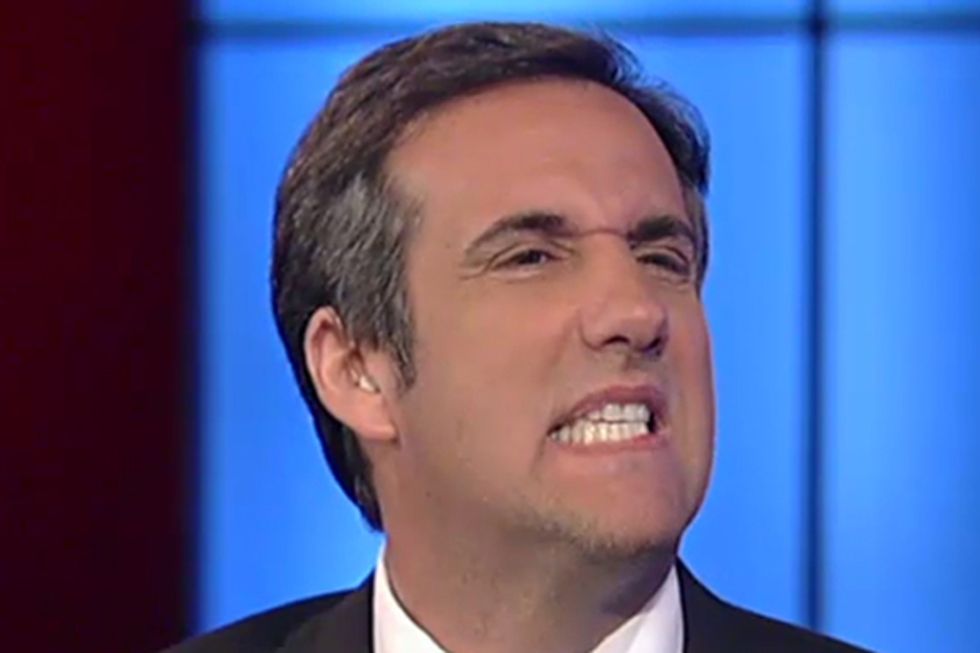 Before we get into this story, can we note that when people are worried about somebody FLIPPING, that means they know full well the person who's getting flipped on (the "flippee," to use the Latin legal term) is guilty as fuck? Otherwise it wouldn't be very valuable to prosecutors for somebody to flip, WOULD IT? Are we all on the same page there? OK good.

Politico and the Wall Street Journal both have stories about how President Dingleshits McCrimeFamily is being warned by advisers and former lawyers that his loyal consigliere Michael Cohen, who calls him "Mis-turrrrr TWUMP," and who has fixed all his dirty shit for years, will almost certainly flip on him to save his own ass. WHOA IF TRUE! And it IS true, because does anyone think Cohen wouldn't flip? If so, they are A IDIOT.

The first story comes from WSJ, and it is about an old 85-year-old lawyer named Jay Goldberg, who has been whispering into Trump's ear through his Obamaphone, assuring him his boy Cohen is going to fuck him. Trump respects Goldberg, because Goldberg is one of his favorite lawyers ever, who represented him on all kinds of divorce-y real estate bidness stuff back in the '80s and '90s.

The White House confirms they talked on Friday, and this is what Goldberg said about Cohen:

“Michael will never stand up [for you]” if charged by the government, Mr. Goldberg said he cautioned the president.

Yes, Goldberg talked to WSJ about his phone call with the president. He chatted with Trump, he chatted with Trump's White House Russia lawyer idiot Ty Cobb, and he immediately ran to WSJ to tell his story. These. People. Are. BONKERS.

Goldberg also told Trump he's in way more BIG TROUBLE MISTER because of the Cohen investigation than he is with the Trump-Russia conspiracy investigation led by special counsel Robert Mueller, which is funny because we're pretty sure Trump's in deep shit with BOTH, especially since prosecutors have a well-known habit of handing each other evidence. "Oh look at the Russia thing we found in Michael Cohen's panty drawer, Robert Mueller!" That is a thing the SDNY prosecutors are probably going to say a lot in the coming weeks.

Goldberg also reportedly advised Trump that Michael Cohen might wear a wire when they communicate, that he should NOT DO A PERJURY INTERVIEW WITH ROBERT MUELLER (not likely at this point!), and that he should go ahead and fire Deputy Attorney General Rod Rosenstein, because it's totally normal for lawyers to advise people to commit obstruction of justice. Goldberg also gave Trump the name of yet another lawyer, because Trump ain't got no real lawyers. The lawyer's name is Frederick Hafetz, and Trump did call him, but unfortunately Mr. Hafetz is washing his hair that day, and will not be able to help. Guess he values his legal practice!

Politico has quotes from other named and unnamed advisers to Trump, who say the same thing about Flippy McFlipperton from Flippertown, AKA Michael Cohen:

“That’s what they’ll threaten him with: life imprisonment,” said Alan Dershowitz, the liberal lawyer and frequent Trump defender who met with the president and his staff over two days at the White House last week. “They’re going to threaten him with a long prison term and try to turn him into a canary that sings.” [...]

“When anybody is faced with spending a long time in jail, they start to re-evaluate their priorities, and cooperation can’t be ruled out,” said one Trump ally who knows Cohen.

Yeah, like for instance Cohen might decide he'd like to see his wife and children before he dies or something. We know he says he would take a bullet for MISTURRRR TWUMP, but we're just a-guessin' he might change his mind, especially if he catches charges in jurisdictions where MISTURRRR TWUMP can't pardon him like a common Scooter Libby.

“It would be as stunning and life-disrupting a surprise as his winning the presidency,” Dean added. “And if there is any prosecutor’s office in the USA that can flip Cohen, it is the Southern District of New York.”

WHOA IF TRUE, and oh please God, let it be true!

In related breaking news, Michael Cohen just dropped his defamation lawsuits against BuzzFeed and Fusion GPS -- just like AMI, the parent company of National Enquirer, has suddenly come to a conveniently timed settlement with Karen McDougal, the Playboy playmate who used to bump stinkies with Trump while Melania was at home with baby Barron. Cohen had alleged that BuzzFeed and Fusion GPS had LIBELED HIM because the Steele Dossier said Cohen went to Prague in 2016 to meet with Russians helping to fuck the election for Trump, when Cohen's passport PROVES he has never been to Prague, even though McClatchy reports that Robert Mueller has evidence Cohen totally went to Prague. Guess Cohen isn't so interested in being involved in civil cases that subject him to discovery anymore!

It's also possible that Cohen, as one of Cooley Law School's finest graduates, just now learned about Discovery, How Does It Work?

Better get to flippin', asshole! Unless you want to GO TO JAIL FOREVER.