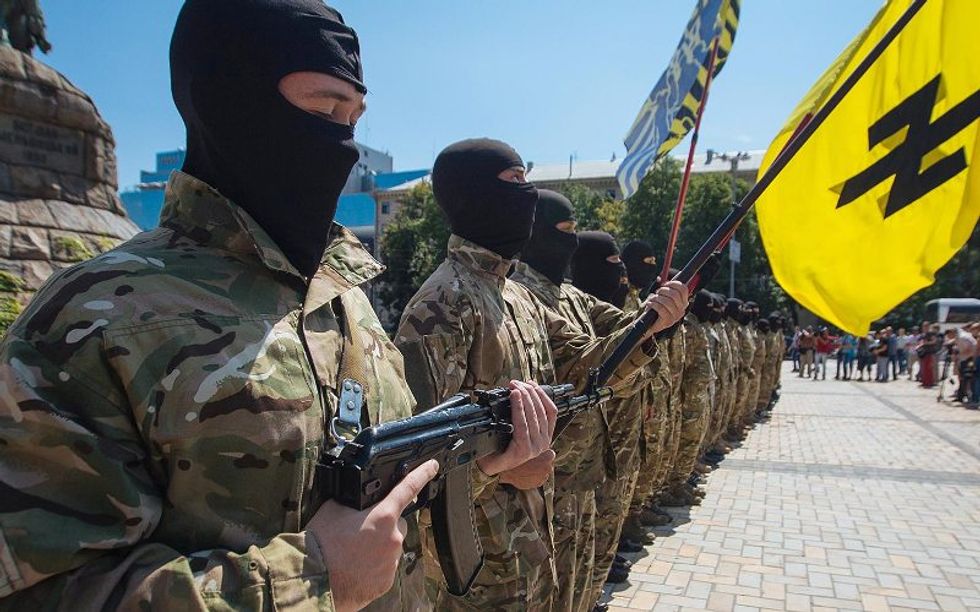 The conflict in East Ukraine is “a choice between civilization and barbarism,” warns Ukrainian president Petro Poroshenko, obviouslyalluding to the Associated Press photograph of “a Ukrainian volunteer soldier, with emblems of WWII SS Galician division.” What was once described as a poor choice of Halloween costume by Prince Harry is now in vogue with celebrated government forces participating in Ukraine's Anti-Terror Operation. Incredible, that only a few years ago, Nazi emblems and the people who wore them were under the cloud of critical disapproval – what is posterity? Or “civilization,” for that matter?

Nazi symbols representing European integration have become so trendy in West Ukraine that The Daily Beast feels the need to ask, “Why are swastikas hot in West Ukraine?” Is it because handsomepants Russell Brand has reclaimed the swastika as the ancient mascot of the Mormon Tabernacle Choir? Of course. But it's also because “in these times of enormous passions, kindly symbols don’t attract crowds.” Your correspondent will not dispute the fact that the swastika has a proud tradition of attracting European crowds. But in some countries, it will also send you to European prison.

Instead of prison sentences, Ukraine's swastika enthusiasts receive guns and laurels from their civilized government.

In August, Poroshenko awarded the leader of the pro-choice knitting club Azov Battalion, Andriy Biletsky, with the Order For Courage. Biletsky is not only a courageous Wolfsangel-bedazzled freedom fighter, he is also the head of Ukraine's creatively named Social-National Assembly, which is committed to “punishing severely sexual perversions and any interracial contacts that lead to the extinction of the white man.”

Close your eyes and try to imagine the font size 72 Caps Lock Washington Post front page screamfest if it was discovered that Vladimir Putin had decorated a brain-dead maniac who has promised “to prepare [Russia] for further expansion and to struggle for the liberation of the entire White Race.” Now change “Vladimir Putin” to “Petro Poroshenko” and “Russia” to “Ukraine” and you will finally understand why we live in an upside down nightmare garbage world.

(True to its mission of proliferating misery, The Washington Postdescribes the gentlemen who serve in Biletsky's battalion as “battle-scarred patriots.”)

Your correspondent does not think Petro Poroshenko is Hitler, or even a semi neo-Nazi. Poroshenko is very very rich -- from selling candy, incidentally. His only ideology is “please let me stay rich?” and so he has forged a very cynical and surely catastrophic alliance with Ukraine's most passionate, battle-scarred patriots – most of whom would be rotting in prison if they lived in civilization.

We are not fibbing -- they really should all be in prison. One of the “nationalist” battalions under the control of Ukraine's Ministry of Defense has been accused by Amnesty International of “widespread abuses, including abductions, unlawful detention, ill-treatment, theft, extortion, and possible executions” – what Newsweek describes as “ISIS-style war crimes.”

In other words, Ukraine's battle-scarred patriots are engaged in all the hallmark activities one should expect from an anti-terror operation.

Actually, here is a useful life hack which will help you navigate the stormy waters of 2014 and beyond: Any government acronym, military operation or Mountain Dew flavor which includes the word “anti-terror” should be considered dangerous to humanity and a brighter tomorrow.

There are a few other points your correspondent would like to make, if you will allow him to:

1. Russia has painted this issue with a wide brush, accusing the Ukrainian government of top-to-bottom, head, shoulders, knees and toes Fascism. The propaganda shown on state television is – how can we say this carefully, without being kidnapped by the FSB? – in poor taste. This is horrible and wrong.

2. ...And so is giving guns and ammo to the armpit of humanity, and then allowing them to terrorize East Ukraine with impunity. Which is exactly what the Ukrainian government has done, regardless of its own political leanings.

3. As the recent parliamentary elections have clearly shown, Ukrainians are tired of swastika monsters goose-stepping around their deeply divided country. They're a clear minority. So why does Poroshenko feel the need to lick their boots? (Because, tragically enough, these sad humans are the Muscle behind the Revolution.)

4. Surely we can all agree that this conflict is a bit more nuanced than “a choice between civilization and barbarism”?

5. Vladimir Putin will liberate the entire White Race from sexual perversions and all interracial contacts. Thank him in advance.

Riley Waggaman is “America’s most trusted cub reporter,” according to Vanity Fair. He is not a reporter and he does not live in America. He can be reached at riley.waggaman at gmail dot com.