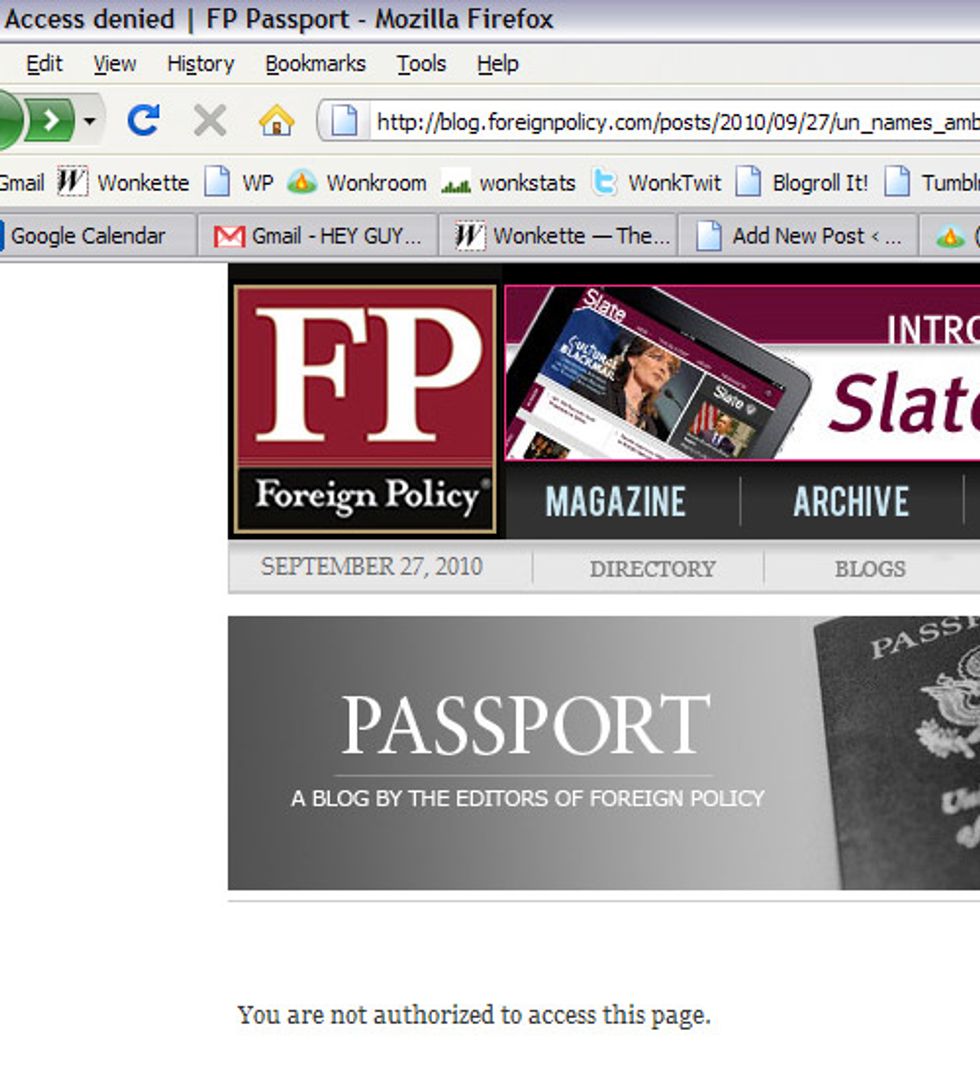 Have you heard about the impending invasion of the Space Devils? Whether it's another discovery of a new "earthlike" planet filled with thousand-foot-tall rape monsters or the latest MSNBC documentary about the night demons who arrive all the time in UFOs as foretold in the Bible, it seems we just can't escape the fact that very soon now, the sky will be filled with gigantic "processing ships" where we'll all be assaulted (sexually) around the clock for a hundred years (thanks to the aliens' sophisticated Obamacare) and the beast-lords will stomp the Earth and chew the heads of our beloved children the way we eat entire CostCo crates of corn-syrup puffs each night when we settle down in front of the flat-screen. Anyway, the United Nations has decided this is just the kind of impossible, intractable problem that requires a special UN envoy.

The Guardian reports on the Sunday Times report:

According to the Sunday Times and numerous other media outlets that followed up the story, the United Nations was "poised" to appoint an individual to be the first point of contact with aliens.

Malaysian astrophysicist Mazlan Othman was being lined up for the role, the story said. As head of the UN's Office for Outer Space Affairs (Unoosa) Othman would be the "nearest thing we have to a take me to you leader [person]", Prof Richard Crowther, from the UK Space Agency, told the Sunday Times.

According to the paper, Othman is due to tell a Royal Society conference that as the detection of extraterrestrial life is more likely than ever, the UN needs to be ready to co-ordinate humanity's response.

For reference, here is Ronald Reagan warning of the UFO Alien Invasion, which is going to be totally worse than the movie Red Dawn, which fought in WWII with Reagan to liberate the Nazis from Bitburg:

BUT WAIT: Now the United Nations alien ambassador is denying that she is the Alien Ambassador, which is bullshit:

... uhh, and we were going to link to the Foreign Policy article about the UN naming an ambassador to the space monsters, which is still visible on Google News, but clicking the link now goes to this:

Let's try another one. Here, how about this:

If and when extraterrestrials try to contact humanity, they might want to stop by the United Nations headquarters. But despite earlier reports, it looks like there won't be a designated ambassador-to-the-aliens waiting for them there after all.

According to numerous reports, 58-year-old Malaysian astrophysicist Mazlan Othman, head of the U.N.'s Office for Outer Space Affairs--which is charged with "promoting international cooperation in the peaceful uses of outer space"--had been tapped for the role. Word was that she was waiting only for U.N. scientific advisory committees and the General Assembly to give the thumbs-up.

But now the U.K.'s Guardian News says that Othman is quashing the suggestion. "It sounds really cool but I have to deny it," Othman reportedly said in an e-mail cited by the online newspaper.

Oh and here is Reagan going off about the Space Aliens again. Can you believe this guy was not only president, but is still the Personal Jesus of certain old white idiots?