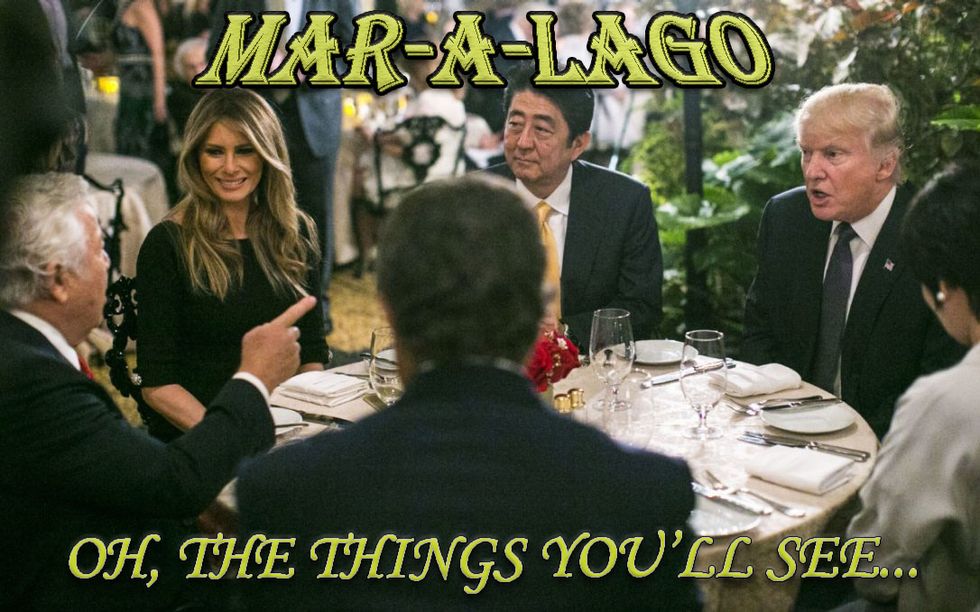 It shouldn't come as a surprise that Donald Trump wants to spend as little time as possible in Washington DC. It's an old town, nothing is made of gold, and all the buildings are really short and full of filthy commoners. Donald Trump has penthouses full of fabulously wealthy people where he can walk around without a bathrobe, scream at cable news, and eat taco bowls. He doesn't need to be tethered to some ancient desk in an ugly marble shithole full of uncomfortable furniture and stairs, surrounded by jerks who ask unfair questions about the economy, electoral votes, and whether or not his friend committed treason. It's no wonder he needs so many vacations!

Since the election, Trump has made a point of spending as little time in DC as possible, causing Washington's army of bureaucrats and number crunchers to log long hours as they try to keep tabs on who bought what, when, and why. Unbeknownst to most people (but knownst to us) Washington is actually propped up and run by civil servants with paper pushing office jobs, and the First Family is not making the lives of boring logistics geeks easy with all their jet-setting.

Trump Tower: A Luxurious Address With Secret Service Protection And A Target On Its Back!

What, you don't want to live there? There's totally a Starbucks in the lobby.

The Trumps seem blissfully unaware that everything they do is monitored by multiple government agencies whose sole purpose is to track and secure the president and the First Family. That means Melon Trump has her own detail of federal agents, as do each of those three spoiled brats (and Barron). (We have no idea about Tiffany.) Whenever they go somewhere for a burger, or a salad, or to fuck a Russian pee hooker, we're paying through the nose for them not to become martyrs for high society snobs and the tragically stupid.

Each time Trump leaves Washington, he is setting fire to large piles of tax payer money. A trip Mar-a-Lago to "accidentally" spill state secrets on Insta-Face-Gram costs the local police at least $60,000 per day, and that doesn't include the cost of non-stop Coast Guard patrols or Secret Service detail. New York is already asking for millions in reimbursement costs, seeing as it spends $500,000 PER DAY making sure A Idiot doesn't try to throw a flaming bag of poo at Trump Tower. The Secret Service have to split themselves between the entire family and its property, not just Donald Trump himself, and it's pushing the limits of an agency that's already besieged with leadership failures and low morale.

“There was an anticipation of how stressful it was going to be on the agency, but the harsh reality is that the stress is just overwhelming,” said Jonathan Wackrow, a 14-year Secret Service employee [....]

Even veteran agents, Wackrow said, are feeling the pressure of the “monumental” task, including manning high-security perimeters in Washington, Florida and New York, along with protecting family members’ private-business travel across three continents.

This doesn't account for all the little things that happen to cities and towns when the president flies in. Sure, there's the cost of securing a localized area, but it's not like a couple of guys with guns follow the president into a cramped room and stare at the door with itchy trigger fingers. There's people who have to scout locations and assess potential threats, sweep rooms for listening devices, bombs, and left-over condoms. The staff of businesses must to be vetted, given a security clearance, and a perimeter needs to be established before the president can even get close. Then there's the presidential staff, the White House press pool, all of whom need their own accommodations. The people who live in those cities and towns have to deal with re-routed traffic patterns, security checkpoints, a media circus and the high-speed unstoppable death train that is the presidential motorcade. All of that costs taxpayers money, and it's not cheap.

And, as with most things in Trumpland, it gets astronomically worse because these are all Trump properties. Since Trump hasn't divested himself from his businesses, each time he leaves the White House to stay at his own property he's potentially creating another conflict of interest, and a massive security risk, as all the rich, shameless jack-offs who love to brag on Twitter for magic Internet points scramble for selfies with of a president who pretends to know what he's doing.

Now, compare that to high-volume tantrums thrown by conservatives whenever the Obamas took a vacation, or the ump-teen million trips to Crawford taken by George W. Bush just so he could dick around in the woods, and you can see why people get a bit upset with a man who said, "I would rarely leave the White House because there's so much work to be done."