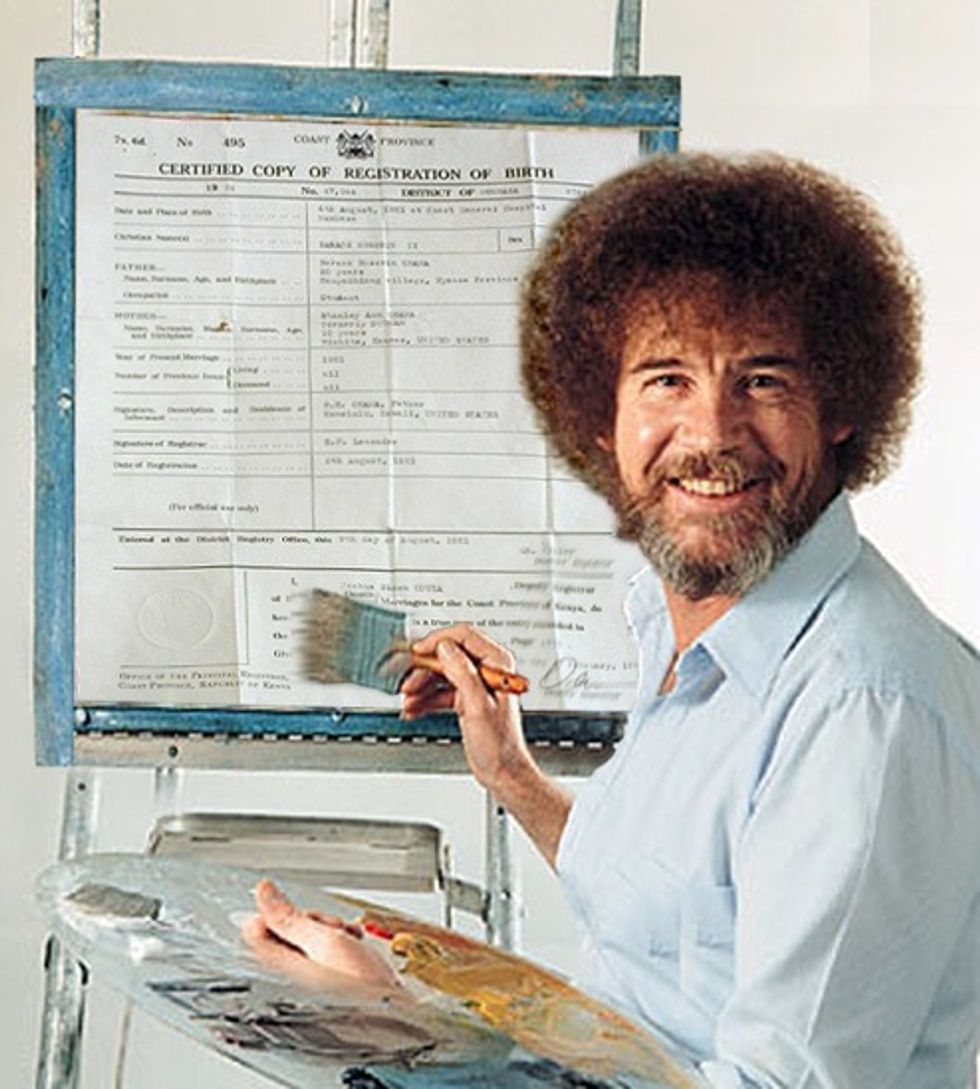 After a week or so of various campaign surrogates crossing their hearts and saying that Donald Trump is no longer a birther, no way not any more, someone had to go and ask Trump if he really has decided to join the reality-based community and acknowledge that President Obama was born in Hawaii. You'll be ever so astonished to learn that the Washington Post's Robert Costa was unable to get Trump to give up The Precious, the toy that made him, somehow, a Serious Political player five years ago when Trump sent an imaginary "team of investigators" to Hawaii, never to be heard from again.

In an interview published Thursday evening, Trump simply couldn't bring himself to say the words, because Reasons:

“I’ll answer that question at the right time,” Trump said. “I just don’t want to answer it yet.”

When asked whether his campaign manager, Kellyanne Conway, was accurate when she said recently that he now believes Obama was born in this country, Trump responded: “It’s okay. She’s allowed to speak what she thinks. I want to focus on jobs. I want to focus on other things.”

He added: “I don’t talk about it anymore. The reason I don’t is because then everyone is going to be talking about it as opposed to jobs, the military, the vets, security.”

Yr Wonkette will now point out the blisteringly obvious: Donald Trump wants everyone to be talking about it instead of real issues, because Hillary Clinton actually knows about that shit, but "Birther" gets big sparkly headlines. T'was birtherism that brought him safe thus far, and birtherism he hopes will lead him to the White House. The "right time" will presumably be the final day of his administration, be it when a new president is sworn in in 2021 or 2025, or perhaps shortly after his impeachment in the summer of 2017. Or never. Does never work for you?

Later Thursday, after the interview was published, Trump campaign spokesman Jason "I'm a Real Boy" Miller tried a little damage control for his own candidate, saying in a statement

that Trump no longer doubted Obama’s birth in Hawaii and had done “a great service to the President and the country” by prompting Obama to release his long-form birth certificate in 2011. But Miller also repeated the widely debunked claim that Clinton and her campaign had questioned Obama’s birthplace in 2008, which is false.

Miller is among three Trump associates who have recently claimed a change of heart, but the candidate has yet to say so himself. Trump has repeatedly raised questions about Obama’s heritage over the past five years.

[wonkbar]<a href="http://wonkette.com/444326/donald-trump-youre-welcome-america"></a>[/wonkbar]You know, it's really a damn shame that America has never really given Trump the credit he thinks he deserves for forcing Obama to release that birth certificate, which is of course an obvious forgery. All you have to do is look at the pixels.

Trump also scoffed at the notion that his continued reluctance to put a stake through the heart of his once-beloved birtherism, fill its mouth with garlic, and sew its lips shut could possibly hurt him with African-American voters. Asked whether he thought the issue might hang over his prospects with that voting bloc, Trump "glared" and shot back, “I think it hangs over the reporters.” Good one, sir.

As for his chances with black voters, Trump said, “I’ve come up with African American voters like a rocket ship[.]”

Could be! Mostly like SpaceX's September 1 satellite launch attempt.

[wonkbar]<a href="http://wonkette.com/602958/obama-says-radical-islam-three-times-in-terrorism-speech-are-all-the-terrorists-dead-yet"></a>[/wonkbar]Why the continued reluctance to actually say the words? Crom only knows. Somewhere in Trump's reptilian brain, he has to be certain that saying Obama was born in the USA would mean admitting Donald Trump was wrong, and Donald Trump can never be wrong. Or maybe he enjoys watching people squirm. The one thing we know for sure is that Barack Obama himself has said the words "radical Islam" more frequently than Donald Trump has or ever will say "Barack Obama was born in Hawaii." Or it could be one of those ritual curse things, where if Trump says Obama was legitimately elected, his head will fall off.