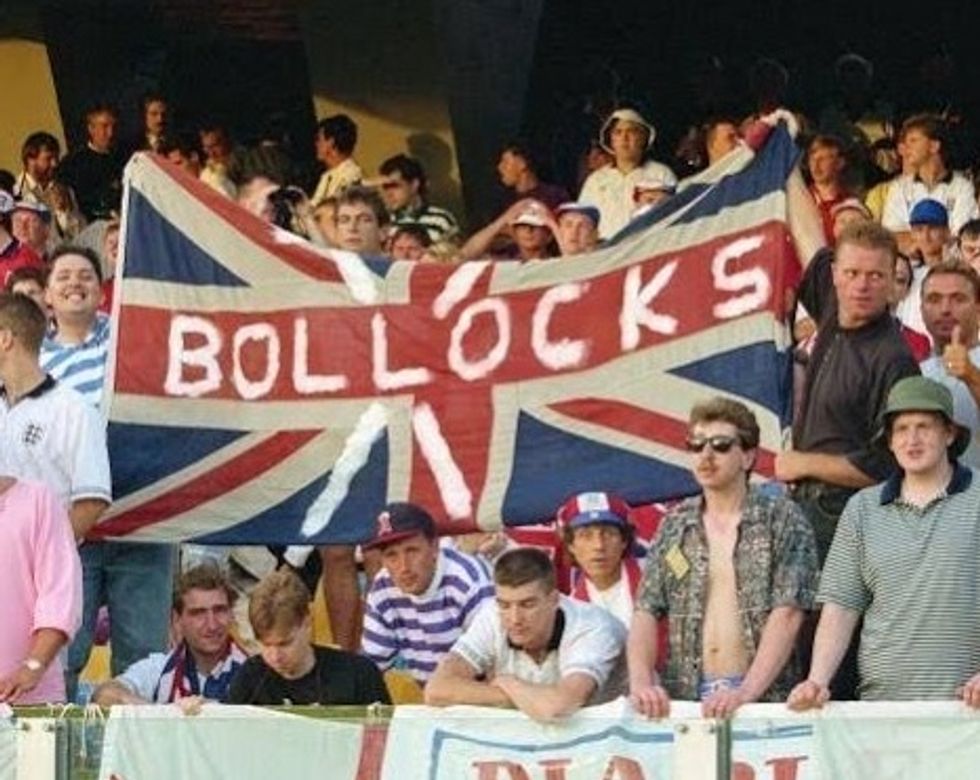 Now updated with Extra Trumpy Stupid! (see end of post) Donald Trump is doing all he can to prove that he's a serious candidate with serious foreign policy chops, like this interview with Piers Morgan on ITV's "Good Morning Britain" morning show, in which Trump made clear the "special relationship" between the USA and the UK is not nearly as important as whether British leaders say nice things about Donald Trump. Trump did not care one little bit for British Prime Minister David Cameron's completely out-of-line assessment of Trump's proposal to ban Muslims from entering the U.S. as "divisive, stupid and wrong."

Trump told Good Morning Britain that "it looks like we're not going to have a very good relationship," if he were to win the presidential election in November.

"Number one, I'm not stupid, OK? I can tell you that right now -- just the opposite," he told Morgan, the former CNN talk-show host. "Number two, in terms of divisive, I don't think I'm a divisive person. I'm a unifier, unlike our president now I'm a unifier."

Good thing he cleared that up. Somehow, Trump forgot to mention he's leading the "Smart Movement." Cameron damn well better start getting his ass in line and get unified, or Trump will teach those limey wimps a thing or two about what America is all about, which is sending butthurt Tweets to everyone who has wronged you. That'll learn 'em. When Morgan asked Trump to clarify his position on Muslim entry to the U.S., Trump explained that it's a very good position because it's a very popular position: "Millions of people were calling in saying, 'Donald Trump is right.'" None of that stuff about how maybe he was just kicking the idea around, at least not for foreign consumption.

Donald Trump might not even kill the new mayor of London's whole family! (But also he might.)

Morgan also had to go and bring up the newly elected London mayor, Sadiq Khan, a Muslim person who very ungraciously turned down Trump's generous offer to make an exception to the No Muzzies policy just for him. Khan, who has never run a single classy hotel or golf course, had the temerity to say that Trump's comments on Islam were "ignorant" and that he hoped Hillary Clinton would "trounce" Trump, which might look good on Pay per View.

Trump: When he won I wished him well — now, I don't care about him. I mean, it doesn't make any difference to me about him. Let's see how he does, I mean let's see if he's a good mayor.

Morgan: Were you offended by what he said?

Well played, Mr. Trump! There are few things the Brits love more than irony, and being lectured on etiquette by Donald "In Your Wee Island Nation My Name Means 'Fart'" Trump is sure to be a big hit with our pals across the pond.

Following the broadcast, a spokesman for Cameron said the prime minister (which is like a president except they don't take two years to elect one, and they have to live in a Hobbit-hole in the Shire) stands by his earlier statements on Trump.

"The prime minister has made his views on Donald Trump's comments very clear. He disagrees with them," the spokesman said.

"He continues to believe that preventing Muslims from entering the U.S. is divisive, stupid and wrong. He stands by his comments."

The spokesman declined to say who the PM would prefer as the next American president, since grownups don't try to interfere in other countries' elections. Whoever the next American president is, of course, Cameron is "committed to maintaining the special relationship," he said, tactfully refraining from adding "even if it's the fascist berk with the dead vole on his head."

This is a nice preview of Trump's foreign policy. Under Barack Obama, he says, our enemies no longer fear us and our allies no longer respect us. Under Donald Trump, that's going to change. Our allies will actively loathe us.

UPDATE: Hey, thanks a lot, NBC, for editing a key part out of your Trump ITV clip! As the Beeb notes, when Piers Morgan first mentioned Sadiq Khan, he said Khan "has attacked you as being ignorant," Trump shot back, "Let's do an IQ test!"

In full context, Khan said "My message to Donald Trump and his team is, your views of Islam are ignorant."

So, hey, Donald Trump does not know the difference between "intelligence" and "ignorance" either. Yr Wonkette regrets we were ignorant of this important factoid, but we blame NBC for that.