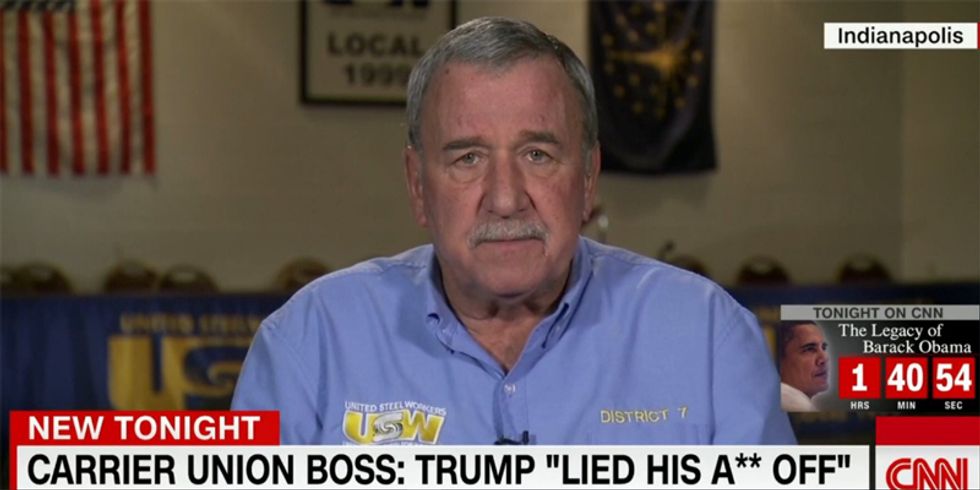 Again, not the Chuck Jones who did the Roadrunner cartoons

Hooray, Donald Trump has begun his first personal vendetta against an ordinary American who dared to speak ill of him, since becoming president-elect! After Chuck Jones, president of United Steelworkers Local 1999 at the Carrier factory in Indianapolis, said Trump had "lied his ass off" when he claimed to have saved 1,100 jobs at the plant (the real number of jobs staying in Indianapolis is 730), Trump took to Twitter last night to explain it was terrible ingrate workers like Jones, not greedy corporations like Carrier, that were the reason companies are moving jobs overseas in the first place:

Another thing we like about this Chuck Jones guy: He only uses an old flip phone, so he doesn't do Twitter. His first word of Trump's Tweet rage came when a friend called to let him know about it.

“My first thought was, ‘Well, that’s not very nice,’ ” he told The Washington Post on Wednesday night. “Then, 'Well, I might not sleep much tonight.' "

And hey, big surprise! Within a half hour of the Tweets, Trump's Internet Flying Monkey Brigade had found Jones, and his phone didn't stop ringing:

One voice asked: What kind of car do you drive? Another said: We’re coming for you.

He wasn’t sure how these people found his number.

“Nothing that says they’re gonna kill me, but, you know, you better keep your eye on your kids,” Jones said later on MSNBC. “We know what car you drive. Things along those lines.”

“I’ve been doing this job for 30 years, and I’ve heard everything from people who want to burn my house down or shoot me,” he added. “So I take it with a grain of salt and I don’t put a lot of faith in that, and I’m not concerned about it and I’m not getting anybody involved. I can deal with people that make stupid statements and move on.”

You may be shocked to learn that this is not the job creation Trump promised.

Carrier Union Leader Says Trump 'Lied His Ass Off' About Saving Jobs, Probably While Head Still Up There

Donald Trump's bogus claim about "saving" over a thousand jobs at Carrier almost made a union leader vomit. Mission accomplished?

So now we know how Donald Trump's program to Make America Great Again will work: He'll claim he'll keep jobs in America by threatening companies that say they're going to move to other countries, then shower them with gifts to keep some jobs here (Carrier is moving 1300 jobs to Mexico anyway), lie about the number of jobs he "saved," and then publicly attack any worker who calls him out on the lie -- and accuse the workers of being the reason companies want to go overseas in the first place. Can't you just smell all the Greatness?

As to whether Jones had done any good representing Carrier workers, Jones told the Indianapolis Star Trump had pretty much lied his ass off again:

"We offered up $23 million per year in concessions," he said. But the company wanted to save $65 million, so it turned down that offer, Jones said.

"He don’t know, once again, what in the hell he’s talking about," Jones said.

On MSNBC's "The Last Word With Lawrence O'Donnell" Wednesday, Jones said that Carrier simply was not going to accept any concessions from the union unless they could somehow go below the $6 an hour the company would be paying workers in Mexico. To do that, Jones said, the union would have had to negate the minimum wage laws, taking $5 an hour with no benefits at all.

Jones also said that if, during the presidential campaign, Trump had blamed American workers for companies' decision to move to other countries, "I’m going to assume that some of them would have thought twice before they would have voted for Mr. Trump, and probably wouldn't have voted for him. The whole thing is ridiculous."

Also, we learned an important trivia fact on the O'Donnell show: everyone's been calling this Carrier plant an air conditioning plant, since that's Carrier's best-known product, but the plant in Indianapolis actually makes furnaces. The More You Know!

Trump should probably yell at his own Veep pick, Mike Pence, for defending a terrible union leader too, since back in March he praised the work Jones and Local 1999 were doing to try to keep their jobs at Carrier:

We're sure Pence will now come up with some suitable explanation for why his boss is right and Jones is terrible -- or to sidestep any questions about it altogether. Hey, isn't it great that Trump and Pence managed to come through for America's workers, and by paying $7 million to Carrier, convinced the company to only send 1,300 jobs to Mexico?

Chuck Jones told the Indianapolis Star he thinks if Donald Trump is angry with him, that means he must be doing a pretty good job as Local 1999 president:

"First of all, that means I’m doing, and we’re doing, as labor representatives, the best we can for the people to give them a living wage and good benefits," Jones said. "No, what he says, that don’t bother me."

And now we have yet another illustration of just how conditional Trump's love for Americans is. He loves the troops, unless a gold star father asks if he loves the Muslim troops, too. He thinks women are the greatest, unless one asks him a tough question. And he loves the American Worker, unless one questions his lies about the specifics of a deal Trump was bragging about.