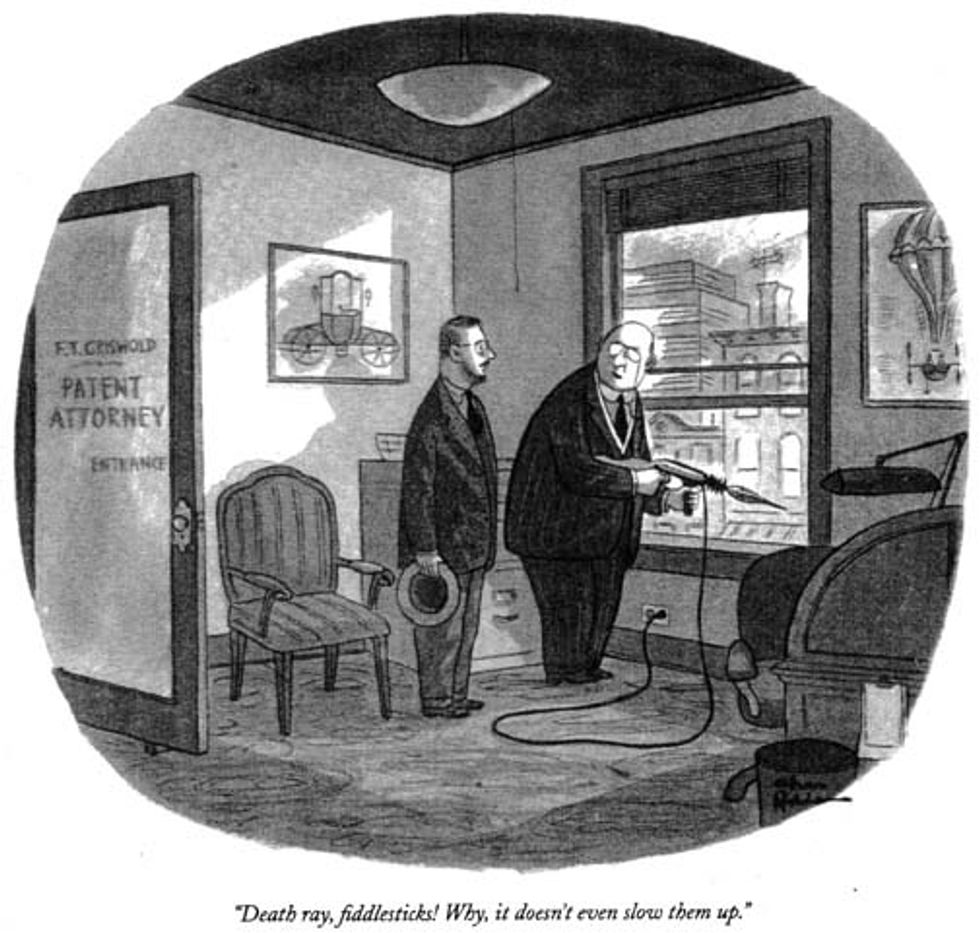 This week we learned that two upstate New York patriots have very active imaginations and maybe don’t like Muslims so much. Amateur mad scientists Glendon Scott Crawford and Eric J. Feight have been arrested for conspiring to build an actual remote-controlled, radioactive death ray that would fit inside a van and could be used to silently sicken, terrorize, and kill one’s enemies, for example Muslims (reverse terrorism?) What is most striking about this story to yr Wonkette is not that anyone would try to fund the construction of a death ray by shopping around the idea to both a synagogue (for to kill Muslims, duh) AND the KKK (they’re equal opportunity nutjobs), nor even that two dudes would try to build a death ray in the first place.

No, we are most interested in how two people with engineering backgrounds -- Crawford worked for GE, Feight for an unspecified electronics company in Houston -- would actually waste so much of their time and effort on trying to do something that the laws of physics say you pretty much cannot do. CR_EATURE couldn’t be reached at his secret lair, so it falls to us to do Science Words at you!

Actually, let us let a fellow from Rensselaer do the Science Words, because authority:

The central difficulty in building a working version of the alleged device is the nature of how radiation works. The intensity of radiation diminishes rapidly as you move away from the source -- it's an inverse-square relationship between intensity and distance.

Wonkette Kills Your Buzz, Vol. X: You can’t build a death ray edition. Sorry, weirdos. The above-cited article goes on to note that the medical equipment used to deliver radiation for cancer treatment takes up an entire room, and still wouldn’t be powerful enough to do what these dudes intended theirs to. Yet more evidence that people can be quite stupid despite their on-paper credentials (see also Niall Ferguson.) Yr Wonkette had a hunch that this idea wouldn’t work from our long-standing interest in history’s greatest nuclear horrors, but we got some confirmation before we went to press. We are thankful that Glendon Scott Crawford and Eric J. Feight were not so curious, because now two Muslim-hating, KKK-collaborating jerks are going to jail. Apparently John Law don't care if your death ray is no Death Star, it's conspiracy and terrorism anyway!

And maybe the NSA really isn't listening to all of us, because per the criminal complaint included in the Rensselaer dude article linked above, the FBI caught this guy thanks to a tip from the synagogue where he shopped the idea, and subsequent legally-obtained wiretaps. You’d think any talk of a “radioactive remote controlled death ray to kill Muslims offered to the Jews and the KKK” would draw a few ears over there.

We leave you with this classicCharles Addams take on the topic, courtesy of your Doktor Zoom.