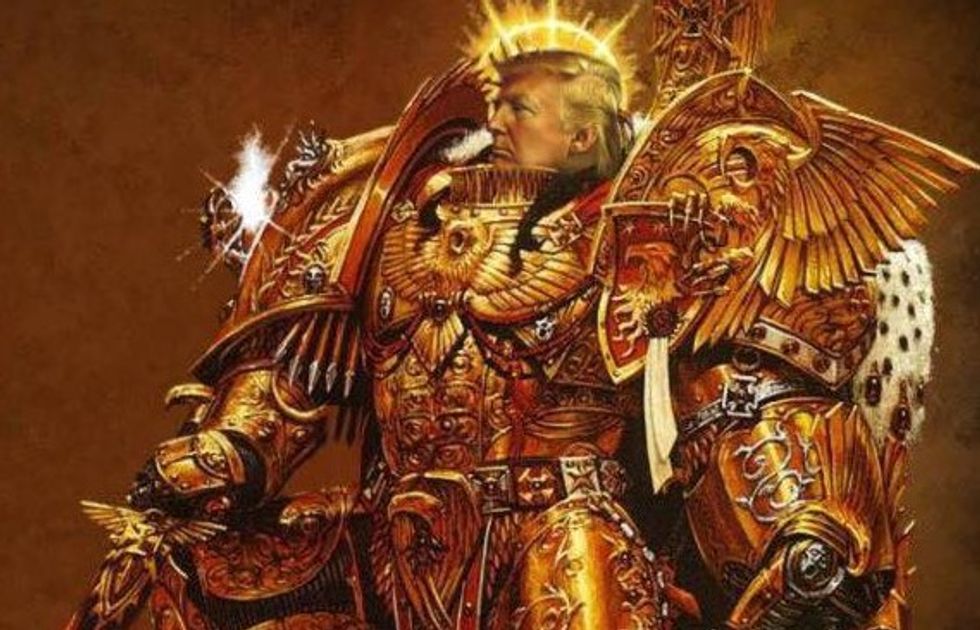 Better get your scorecards out, because there's an all new round of White House Thunderdome underway! Trump yelling at Jeff Sessions is so last week of July -- the new fight is National Security Adviser H.R. McMaster versus the foul spawn of Steve Bannon and Michael Flynn, McMaster's predecessor. Wednesday, we looked at the weird wordvomit that got Bannon pal Rich Higgins fired from the National Security Council. Wednesday night, McMaster up and fired Ezra Cohen-Watnick, a young twerp Flynn brought to the NSC as senior director for intelligence programs. When Flynn was booted and McMaster took over the job, Cohen-Watnick -- who was handling sensitive intelligence information at the tender age of 30, and was the guy Devin Nunes, "recused" shitweasel chair of the House Intelligence Committee, relied on in his heroic quest to give the White House secret intelligence he got from the White House about "unmasking" and "wire tapps" -- was one of the first people McMaster wanted to get rid of, because the CIA reportedly couldn't stand him. But Cohen-Watnick had the love of Steve Bannon and Jared Kushner to keep him warm, so he went to Trump and asked to be kept on, and the president overruled McMaster.

But dynamics, as they say, have shifted, and now Cohen-Watnick is the third Bannonista in three weeks to get shitcanned. The other, now former senior director for the Middle East Derek Harvey, got the boot last week. Harvey had earlier this year presented McMaster with a list of NSC "holdovers" from the Obama administration and insisted they be fired as "Deep State" adversaries of Trump, but McMaster said nah, no way.

Cohen-Watnick, a former low-level official at the Defense Intelligence Agency, was something of a mystery presence on the security council, but he made friends with Bannon, Flynn, and Kushner during the transition, and that was enough to buy him some protection, according to an article in The Atlantic that apparently got under McMaster's skin because it portrayed him as unable to control his own NSC. Politico reports that McMaster had started getting along little better with Cohen-Watnick, but he was still annoyed at the headline calling the little twerp "The Man McMaster Couldn't Fire," so when he saw the chance to boot Cohen-Watnick, the boot was delivered, and the general was pleased.

Ah, but now, the wingnuts are gunning for McMaster for cleaning house of all their Breitbart heroes, because the only thing worse than Radical Islam or Democrats is a Republican turncoat who is insufficiently Trumpy. They're especially angry with McMaster for his heretical view that it's not really helpful to think shouting "Radical Islamic terrorism!" all the time is equivalent to actually fighting terrorism, and Laura Ingraham tweeted a link to a February New York Times article titled "H.R. McMaster Breaks With Administration on Views of Islam," so that ought to stir up plenty of primal rage among Trump's Online Flying Monkey Brigade.

Judging by the replies, it worked!

Other wingnuts are certain McMaster is a great big baddie, but they aren't sure if he's a dupe of Radical Islam or of The Jews. Maybe BOTH, because after all, the just-fired Higgins was perfectly happy saying Islamists, globalists, and Leftists were all in it together, so it only makes sense (to a disordered mind) that radical Islam and the Zionist international bankers are on the same side. Here's Alex Jones love child Paul Joseph Watson retweeting a Breitbart story about McMaster's love for Islamic radicalism and hatred of Israel:

Scary! He looks like Col. Kurtz! But here's Mike Cernovich, the poor dear who's been targeted for death by the ADL, linking to a website called "H.R. McMaster Leaks," which ofers as a header this wacky cartoon of McMaster and David Petraeus as puppets controlled by George Soros, who is himself a puppet being controlled by a hand labeled "Rothschilds." It's all symbolic 'n' shit:

The image on the site has been trimmed to remove the 'Rothschild' part.

[wonkbar]<a href="http://www.wonkette.com/621158/mike-cernovich-quitting-trump-to-spend-more-time-with-his-serious-journalism"></a>[/wonkbar]The wingnut frenzy over McMaster has now gone to Full Boiling Murder-Rage with a report that McMaster doesn't think Barack Obama's national security adviser, Susan Rice, did anything wrong in "unmasking" Americans' names in NSA intelligence reports. Since it's an article of wingnut faith that Rice is a traitor who did treason, this is the last straw and McMaster must be fired, at the very least, lest America be overrun by his radical jihadist allies before morning. Cernovich, who wishes he could quit Trump but can't, reports the villagers are gathering pitchforks and torches for tonight's Trump rally in West Virginia. Or at least paper:

These folks will not be happy until Trump rewards them with McMaster's head. Or at least his scalp. Or some neck hair, maybe. It's the Night Of The Long Sporks. But will H.R. McMaster's be the next head to roll, or will Bannon be out, or will all this blow over when Putin releases the (ALLEGED!) Pee Tape? Stay tuned! We are through the white rabbit's looking glass and into the Red Queen's sticky wicket, people. The stupid just won't stop.

Yr Wonkette is supported by reader donations. Please click the "Donate" linky below so we can help guide you through the coming purges.