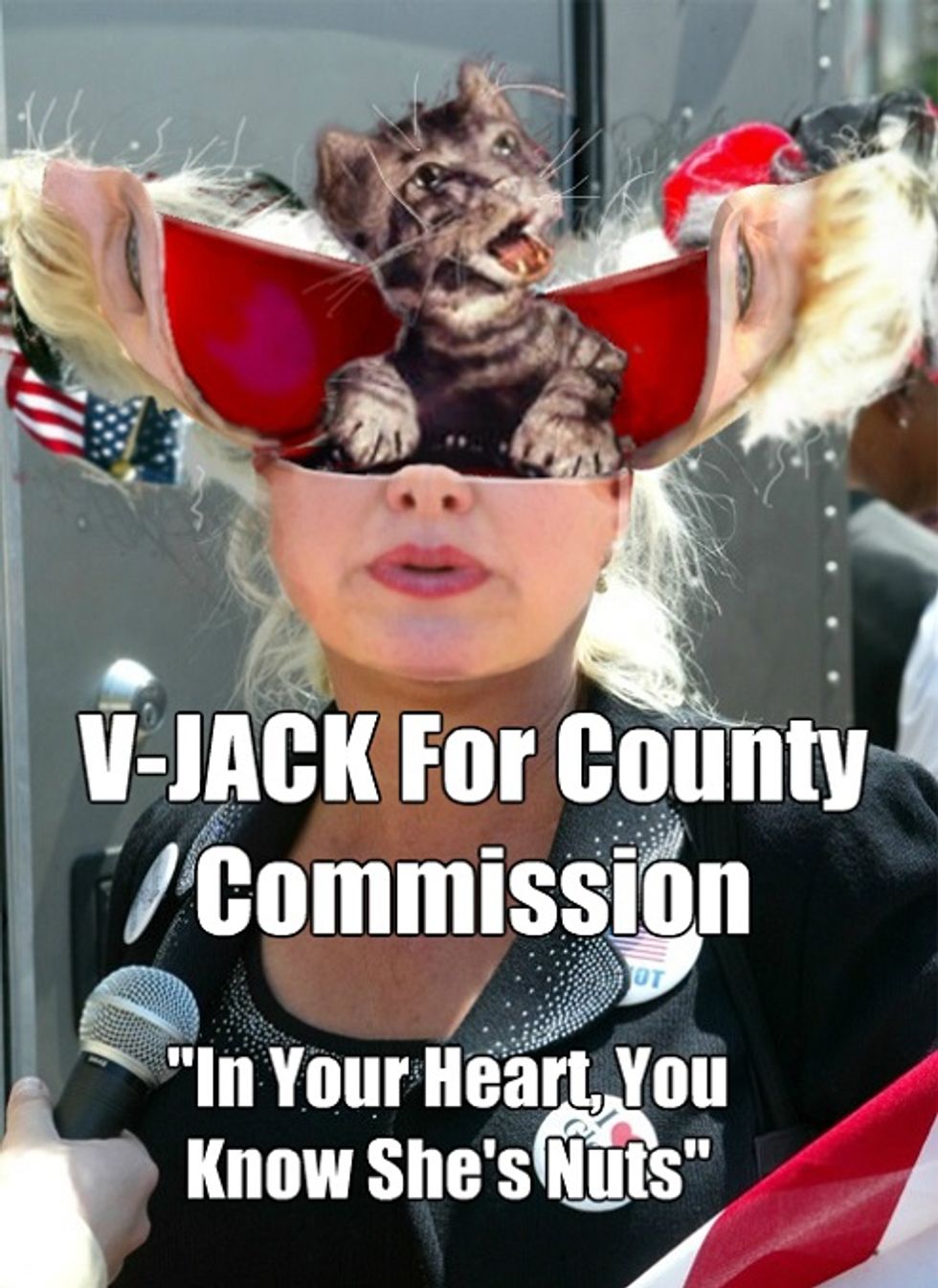 We knew itmight happen. We hoped for the best. We had a campaign poster contest. And now we have the candidate.The Tennessean reports:

Former “Saturday Night Live” cast member Victoria Jackson wants her next act to be as a Williamson County Commissioner.

Jackson, who moved to Thompson’s Station last year, is petitioning as an independent to become a candidate for one of two District 2 commission seats, currently held by commissioners Betsy Hester and John Hancock.

V-Jack, honey, we are behind you 3000 percent. And in your world, that's a real number.

Jackson says she's running as an independent because she's "very disappointed with the Republican Party," presumably because it's become so liberal lately, like Fox News. She told the Tennessean that she used to register as a Republican, but not anymore:

I just can’t do it anymore; they just don’t have the values of our founding fathers anymore,” she said. “I am sure there are a few Republicans who do. I want less federal government involvement, lower taxes, smaller government, more public involvement, a balanced budget and fiscal responsibility.”

Also, running as an independent allows her to bypass the May 6 Republican primary, but it would be really, really RUDE of us to suggest that had anything to do with her decision to run as an independent. As we know, Victoria Jackson is not one to shy away from a fight, especially if there's the chance to say something stupid in public. We'll be the first to admit that we just selfishly wish we could see her in a debate, is all.

In any case, she is totally sure she fits in with Middle Tennessee's political culture:

“I think I will fit in quite easily with (the current county commission),” Jackson said. “I went to the dentist recently and there was a Bible in the lobby of the dentist office. ... I love this town [Thompson's Station]. My two favorite things are here -- Jesus and show business.”

Wonkette was unaware that Jesus had purchased a residence in the town of about 2200, but we would be loath to question V-Jack's wisdom on this. In addition to her keen Bible-spotting skills, Jackson shares many other qualities with her neighbors. Like many Tennesseans, she had a paranoid freakout over the opening of that mosque in Murfreesboro, because America. She has also been reading up on the greatest threats faced by our once-great nation: the Muslim Brotherhood and its infiltration of the Obama administration, the UN's freedom-destroying Agenda 21, and the Common Core education standards, all of which have direct bearing on the important work of a county commissioner. She even shared with the newspaper how she experienced a political awakening when she read the dictionary definitions of communism, socialism and capitalism:

"Then I said, ‘I smell a rat. I smell communism and socialism creeping in here and we’ve got to get rid of it,’" Jackson said.

But let's not just take the Liberal Media's word; let's see what Jackson has to say on her very own blog!

She opposes Common Core because it

Good lord -- you mean to say that the government keeps a database of people's names and locations? JUST LIKE HITLER! Also, wanking instructions.

She also does not like the UN and its communist bike paths:

I’m against Agenda 21, which is being implemented already at the local level, in offices like Main St. Franklin where “Franklin Tomorrow” pushes “innocent” policies like bike paths and walking trails, perhaps unaware of the United Nations plot to separate American citizens from their private property, eliminate suburbs, and concentrate people groups into cities, forcing mass transit, eliminating cars under the false-science guise of “human caused” global warming/climate change.

Stop riding communist bikes! Get in your car and leave it running at all times, for Freedom.

Also, mosques are all "terrorist training camps" and there is no such thing as a "moderate Muslim."

V-Jack promises that she will not run a conventional campaign, either:

“I don’t really want to beg for money from anybody; I hope to do it the old-fashioned way – word of mouth,” she said. “I may pay for some T-shirts and stickers with my own money. I have no political aspirations. I just want to help save my country. It should be about ideology, not about who has the most money.”

Ah, we see: She will coast on name recognition and hope for the best, then blame the liberal media and the liberal Republican establishment when she loses.

Well you just rest easy, V-Jack: You've got Wonkette in your corner, and with our unblemished record of support for Constitutional purists like Alvin Greene and BasilMarceaux.com, you are guaranteed to get attention. Now get out there and get your nominating petitions going. Maybe ACORN can help.

Follow Doktor Zoom on Twitter. He's just torn up that check he wrote to Sandra Fluke and has sent it to V-Jack.