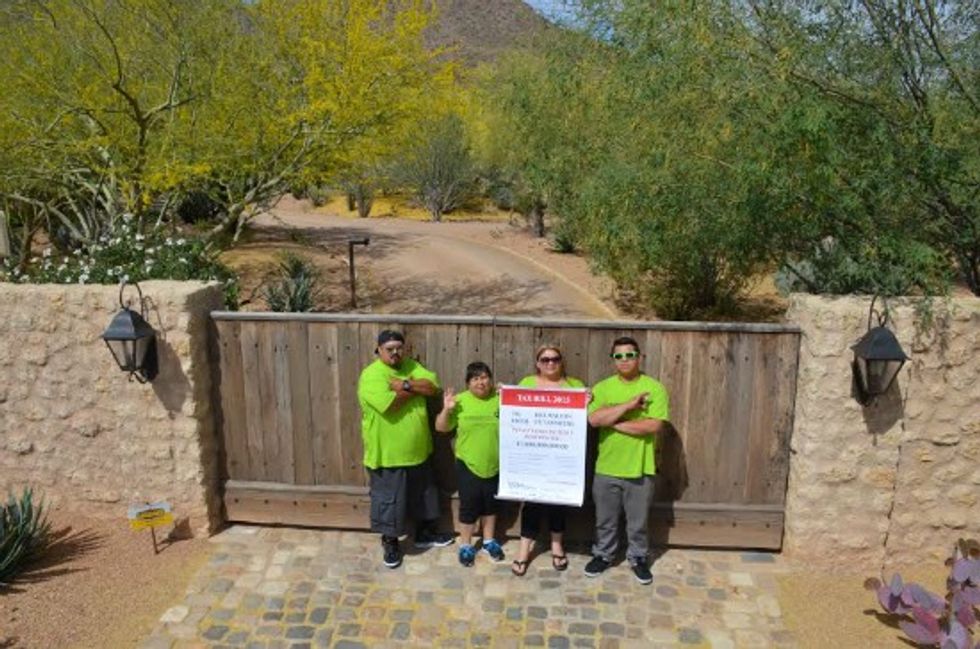 It's Tax Day, which means political entities everywhere are scrambling to graft their agendas onto something with the word "tax" in it, so people who are frantically asking their internets "what for i owe so much taxis?" will give them their email addresses. Us here, we got this nice thing in our email, says"TAXPAYERS DELIVER $7.8 BILLION TAX BILL TO WALMART CHAIRMAN". And they did! The taxpayers went to Rob Walton's compound in Paradise Valley, AZ, with a piece of paper, and now you are reading about it, so they did a good job.

The $7.8 billion that Walmart "owes" is a figure from a report by Americans for Tax Fairness (pdf). It includes billions in welfare payments to low-wage Walmart workers, as well as money saved by exploiting accounting loopholes. Nobody would probably care much about this, except "Walmart made a $16 billion profit in 2013, and the six Walton heirs, who own more than 50 percent of Walmart shares, saw their wealth grow to $148.8 billion—more wealth than 49% of American families combined." So there's that.

We received this email from a Democratic communications firm, and it included a LEGAL DISCLAIMER at the bottom saying, in part: "UFCW and OUR Walmart have no intent to have Walmart recognize or bargain with UFCW or OUR Walmart as the representative of Walmart employees." So we guess this is an OUR Walmart stunt, and we are always happy to write about those.

We are also happy to write about when some guy at Forbes calls the $7.8 billion in tax subsidies for Walmart "fantastical nonsense," then makes a dumb error as he tries to explain why this is.

At first, this point by the Forbes guy, Tim Worstall, struck us as at least valid in theory:

The existence of these welfare payments means that the reservation wage rises. That is, an employer needs to pay people more to come into work because they get an income (however low that is) whether they work or not.

We were going to simply note that we could help both underpaid workers and the overburdened welfare system by raising the minimum wage. But then we realized -- the bigger flaw in his argument is the minimum wage itself. We can see in reality that welfare for Walmart workers hasn't raised the reservation wage at all -- that wage is, in effect, the federal minimum. Sure enough, Walmart starts employees at just a few cents more per hour than that, and would surely be able to staff its stores at exactly the minimum -- they simply choose not to for reasons of employee morale and public image. So the whole theory that welfare is costing Walmart more in wages than it's enriching them falls on that point.

Furthermore oh who are we kidding, you 47% moochers don't care about taxes.