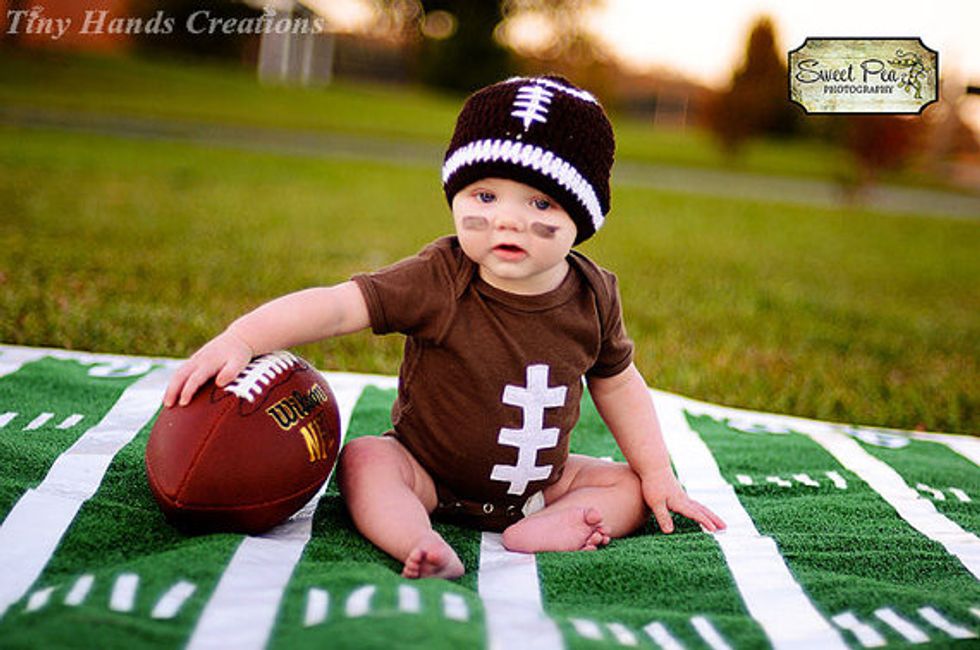 We have important breaking news, America! Monday just got a little bit worse! The Minnesota Vikings Foot-the-ball organisation announced this morning that it will re-activate Adrian Peterson, the running back who was deactivated (but still drew a paycheck) for Sunday's f'ball game because he was indicted on child abuse charges. This was not an easy decision, because on the one hand, child abuse is A Very Serious Issue, but on the other hand, what about Adrian Peterson's due process rights? Among other attempts to seem like they give two shits, the Vikings' statement explains:

To be clear, we take very seriously any matter that involves the welfare of a child. At this time, however, we believe this is a matter of due process and we should allow the legal system to proceed so we can come to the most effective conclusions and then determine the appropriate course of action. This is a difficult path to navigate, and our focus is on doing the right thing. Currently we believe we are at a juncture where the most appropriate next step is to allow the judicial process to move forward.

We will continue to monitor the situation closely and support Adrian's fulfillment of his legal responsibilities throughout this process.

This is where we point out that the National Football League is not a court of law, and that its own goddamned Code of Conduct states:

It is not enough simply to avoid being found guilty of a crime. Instead, as an employee of the NFL or a member club, you are held to a higher standard and expected to conduct yourself in a way that is responsible, promotes the values upon which the League is based, and is lawful. Persons who fail to live up to this standard of conduct are guilty of conduct detrimental and subject to discipline, even where the conduct itself does not result in conviction of a crime. [emphasis added]

And yes, disciplinary action is called for when there's a conviction, but the Code also forbids "Conduct that imposes inherent danger to the safety and well being of another person," as well as "Conduct that undermines or puts at risk the integrity and reputation of the NFL, NFL clubs, or NFL players."

Adrian Peterson hasn't denied that he hit his preschooler with a stick, or that the disgusting photos of the boy's injuries are real. In court, he absolutely deserves due process. When it comes to playing football, however, the Vikings don't need to wait for a conviction -- they could maybe have sent the message that beating on a four-year-old child with a stick is not something they'll tolerate.

Except that apparently that is something they'll tolerate.

In (another) (delayed) reaction to the League's botched handling of domestic abuse charges against Baltimore Ravens player Ray Rice, the NFL announced today that it's hiring three experts in domestic violence to advise the league on being Slightly Less Dickish. Actual ladies with experience in law enforcement, academe, and in providing support to abused women. This seems like a good idea that could have been implemented maybe 30 years ago. Now the league just needs to hire a panel of children to offer suggestions on when it's OK for players to beat the living crap out of their offspring.