Vladimir Putin Pees On Donald Trump, Tells Him It's Raining 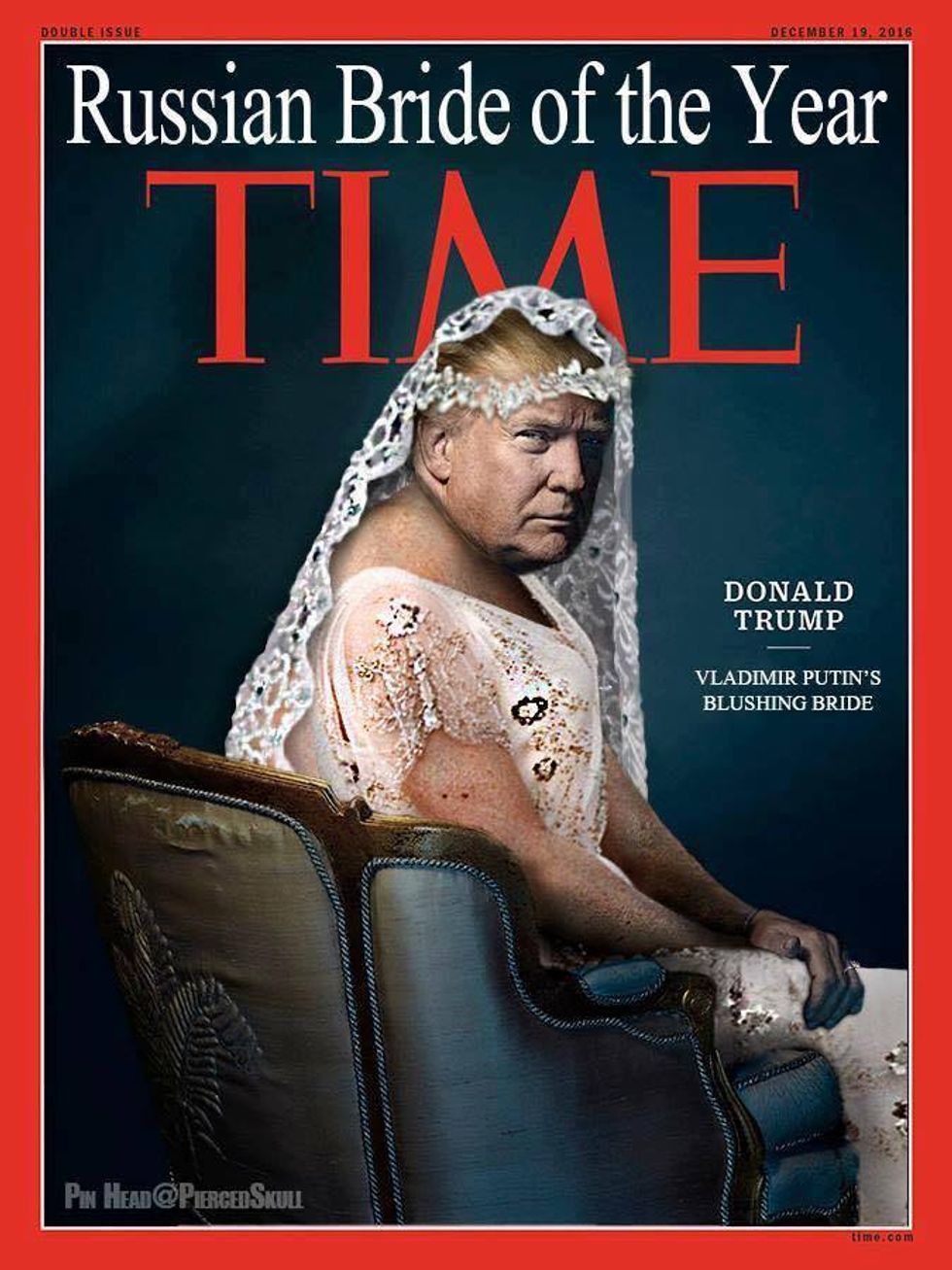 Look, no matter what you saw on Reddit, there is no video of Donald Trump nibbling Vladimir Putin's earlobes in a vat of horse urine. Never happened! Just take it from old Poots himself.

After all, he is not my bride, and I am not his groom or fiancé. We hold public offices, and each country has its own interests.

Russia may have ratfucked our elections, but that doesn't mean we're going steady. Vladimir Putin has a country to plunder, and he's got no time to react to all the stupid shit Trump says.

We've spent several excruciating hours lately transcribing the stupid shit Trump says, and we admit that Vladimir Putin's press conference yesterday gave us just the slightest tingle in our bathing suit bits. Sure he's a vicious killer. But he's so competent! And free from obvious brain injury! No wonder the wingnuts have such a hard on for that guy.

But then we remember that our great-grandfather had to hide in the outhouse from the Cossacks, and we snap right out of it. (We really can hold a grudge.) Also, too, Putin is a dangerous kleptocrat who regularly assassinates journalists and opponents. So there's that.

Last month, the Kremlin ordered the US Mission to cut its staff in Russia by 755 people. The Counterpuncher in Chief balled up his tiny fist and ordered the Russians to close their embassy in San Francisco. That's showing 'em! They had to spend the whole weekend burning documents, and now they'll have to transfer their staff to one of the six other official Russian facilities in the US.

Why ever would anyone think that Donald Trump was trying like hell NOT to piss of the Russians? He's really hitting them where it hurts. Many people didn't know that it was HR problems that brought down the Berlin Wall!

It is difficult to talk to people who confuse Austria and Australia. But there is nothing we can do about this; this is the level of political culture among part of the American establishment.

As for the American people, America is truly a great nation if the Americans can put up with so many politically uncivilized people.

OUCH. It's funny, 'cause it's true! And not just because of that time when CNN said that Australia was building a fence on its border with Slovenia to keep out migrants. We actually elected a pussgrabbin' reality star to be president. We're not exactly in a position to take offense when Putin calls us "boorish."

Anything else, Vlad? Care to tell us why tweeting crazy shit at North Korea is bad policy?

Everyone remembers well what happened to Iraq and Saddam Hussein. Hussein abandoned the production of weapons of mass destruction. Nonetheless, under the pretext of searching for these weapons, Saddam Hussein himself and his family were killed during the well-known military operation.

Even children died back then. His grandson, I believe, was shot to death. The country was destroyed, and Saddam Hussein was hanged. Listen, everyone is aware of it and everyone remembers it. North Koreans are also aware of it and remember it. Do you think that following the adoption of some sanctions, North Korea will abandon its course on creating weapons of mass destruction?

Russia condemns these exercises on the part of North Korea. We believe they are provocative in nature. However, we cannot forget about what I just said about Iraq, and what happened later in Libya. Certainly, the North Koreans will not forget it.

Sanctions of any kind are useless and ineffective in this case. As I said to one of my colleagues yesterday, they will eat grass, but they will not abandon this program unless they feel safe.

Well, that seems rational and nuanced.

And that seems like a lunatic who just fished his phone out of the toilet.

Will Russia be threatening to rain "fire and fury" down on us if we arm the Ukrainians in their fight against Russian "volunteers?"

There is one more thing that those who have such ideas should pay attention to: the self-proclaimed republics have enough weapons, including those seized from the opposing side, nationalist battalions, and so on.

If American weapons start coming to the conflict zone, it is difficult to say how the proclaimed republics would react to it. They may dispatch their weapons to other conflict zones that are sensitive to those who create problems for them.

So you're saying that weapons released into the wild in Ukraine might leak out and fuel terrorism in the Caucasus? Well, you may be a beady-eyed killer, but you do have a point there. Maybe Barack Obama wasn't just a pacifist wuss after all!

Luckily Donald Trump has a nuanced plan for peace in Ukraine. If you tweet about peace over an image of your signature, then everyone will put down their guns. #DIPLOMACY

Yesterday, on the same day- I had meetings with Russian Foreign Minister Sergei Lavrov and the FM of Ukraine, Pavlo Klimkin.#LetsMakePeace! pic.twitter.com/SPiIrJqI6G

Okay, we're all fucked. And while we're not pining for a homicidal strongman, competence and knowledge of subject matter would be nice.

COME BACK BARACK!!! WE PROMISE TO BE GOOD THIS TIME!!! WHY HAVE YOU FORSAKEN US???