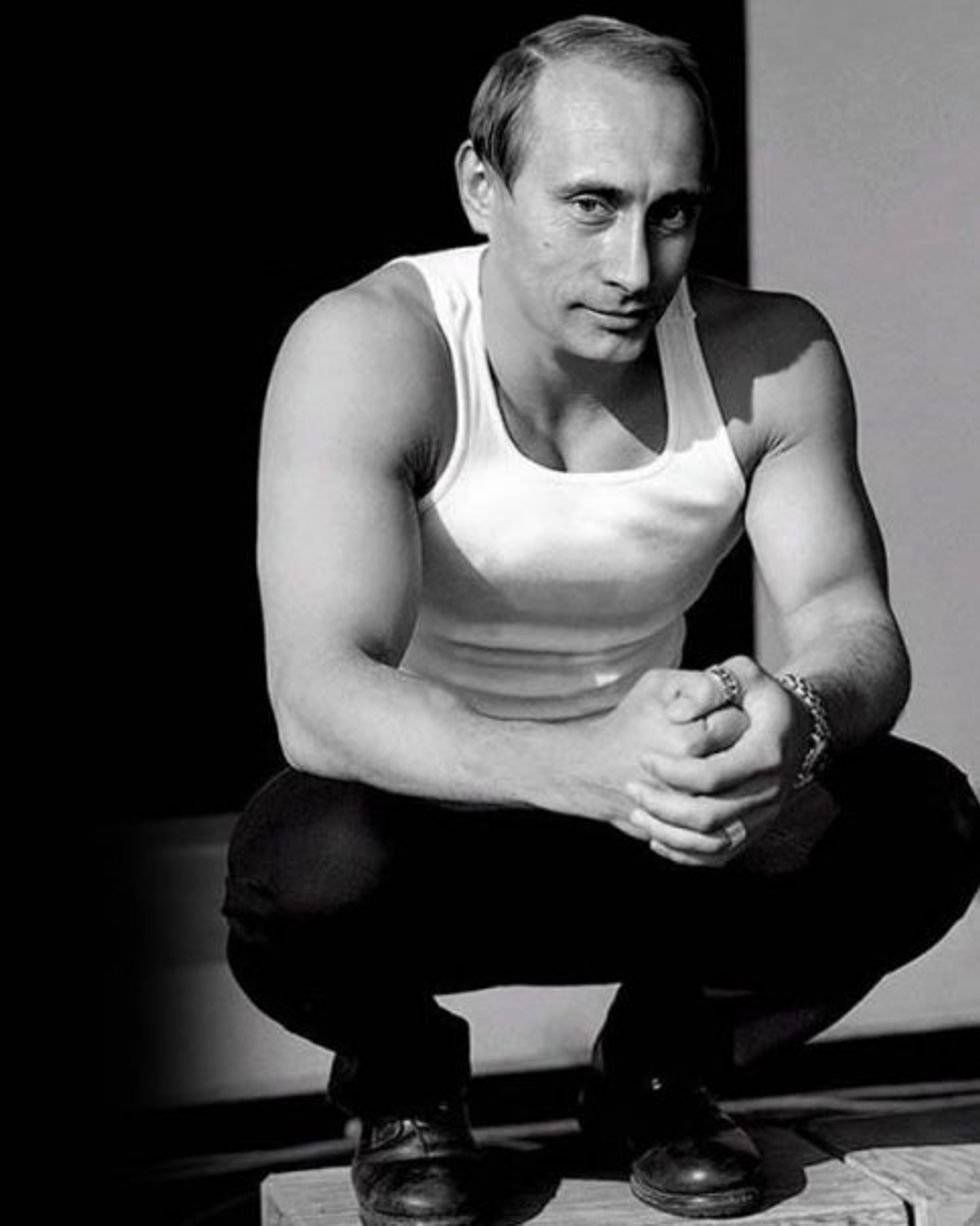 I, Vladimir, am only here to help!

You know the story already. Donald Trump invited Russian foreign minister Sergey Lavrov and ambassador Sergey Kislyak to the Oval Office for a little stitch-n-bitch the day after Trump fired James Comey for being a very bad man who wouldn't stop investigating the president's ties with Russia. Only TASS, the Russian state-owned news service, was allowed to come in and take pictures and maybe drop some new "Wire Tapps" in Trump's underpants while they were wadded up in some corner of the Oval Office. (It's funny because ovals don't have corners!)

Then we found out that, at some time during the meeting that may or may not have been mid-coitus, Trump blurted out some NSFW bigger-than-top-secret U.S. intelligence secrets that we got from the Israelis. Ever since, the Trump administration has been explaining that he DID NOT EITHER do that, and also that he DID TOO EITHER do that, but it's OK because Trump was too dumb to even know what he was doing.

Well now, a deus ex machina has emerged to salvage the credibility of the damsel in distress Donald Trump, and it is Russian president Vladimir Putin! Who let THAT GUY in here? (Trump. Trump did.) Putin, in an act of epic trolling, has offered to vouch for his maybe-intelligence asset with records of what happened in the Oval Office, to settle once and for all whether Trump shared code-word-level intelligence with the Russians:

Russian President Vladimir Putin said Wednesday he would be willing to provide the U.S. Congress a record of President Trump’s meeting with top Russian envoys, bringing scoffs on Capitol Hill that the Kremlin could help shed light on the disclosures of reportedly highly classified intelligence.

The provocative offer for the Kremlin to share evidence with U.S. oversight committees about the Oval Office meeting came with the caveat that the request ... would have to come from the Trump administration.

Records? WHAT KIND OF RECORDS? Did the Russian TASS fuckheads have secret microwaves in their panties equipped with microphones? Did they videotape it? Did the Russians just write memos afterward like a common James Comey? Nah, the Washington Post reports that, according to one of his aides, Putin is offering a transcript, which you could have read in the block quote above if we hadn't deleted it so we could make juvenile panty microwave jokes.

Putin made his offer during a news conference, with Sergey Lavrov in the front row giggling in the Cyrillic alphabet language:

If there were any question as to whether Putin was trolling the White House, he playfully ribbed his foreign minister during the news conference, saying he would have to censure Lavrov “for not sharing these secrets with us.”

“Neither with me nor with our intelligence services,” he continued. “That’s very bad on his part.”

I, Vladimir Putin, am to kid Sergey The Spy Who Clowns Around for failing to share delicious American secret with Vladimir's shirtless body! If Vladimir find out Sergey is hiding something, YOU KNOW WHAT HAPPEN THEN! LOL, as they say in new Russian satellite state of America!

For the record, members of Congress from both parties have told Putin to shove his offer up his perky ass.

Of course, we told you Tuesday that the intelligence Trump spilled was so top secret it couldn't even be shared with the Five Eyes group of nations we share EVERYTHING with. It was reported Wednesday that what he shared is so sensitive the U.S. is still asking news companies not to write about it too specific-like.

And we can be pretty sure that, despite what the always very nice and kind president of the United States and Russia Vladimir Putin says, he totally has that intelligence now, and has probably already sent a candy-gram about it to the Iranians.

Let us break down the multi-leveled magnitude of Putin's trolling, and just how big of a pussy Trump looks like now:

Tillerson: “I would have no way to know that.” pic.twitter.com/E6kPyZAQtJ

Oh god, America, this is actually happening, how did we even get here? This would NEVER happen if Hillary Clinton was president, BUT HER EMAILS WE FORGOT HER EMAILS HOW COULD WE FORGET #NEVERFORGET.

Wonkette is funded by sweet folks like YOU! If you love us, click below, to fund us!