Voter Fraud Is Real, And It's All Republicans 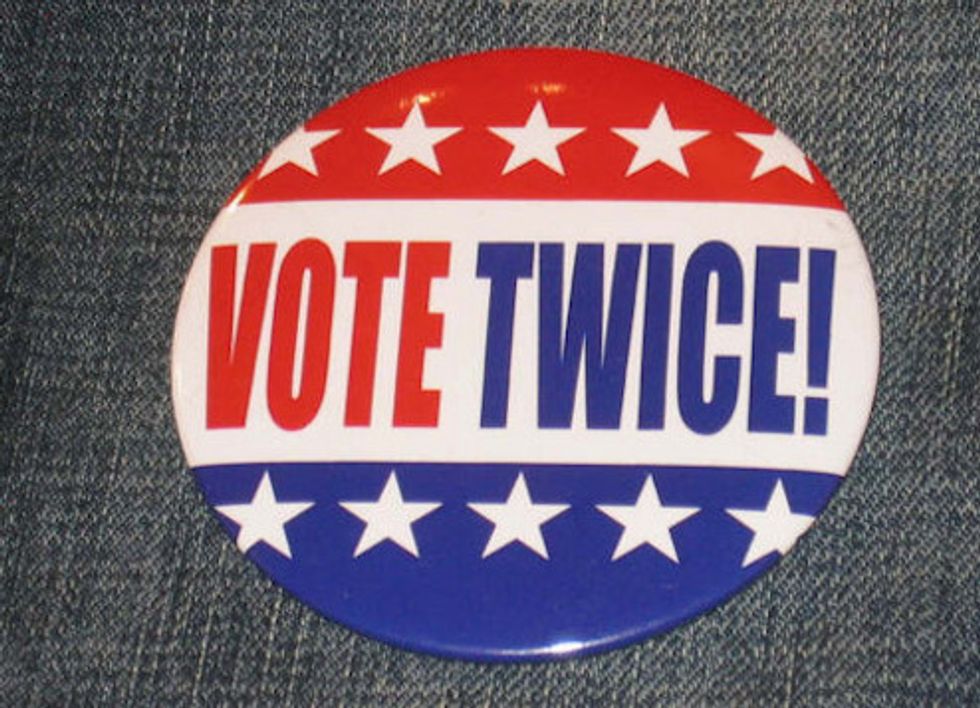 Republican governors and secretaries of state are determined to stop the scourge of Voter Fraud, by ensuring that the wrong kind of people can't vote. (Poors, minorities, Democrats -- you know the type.) Sure we laugh at them, but it's no laughing matter. Voter fraud is a real problem. Among Republicans, anyway.

Arkansas Online reports this disturbing discovery of one such Republican voter, Leslie Rutledge of Arkansas (sometimes) and former legal aide to good ol' Mike Huckabee, who wants to vote in ALL the elections: the Arkansas ones, the Washington D.C. ones, and maybe Virginia too. The best part? She's running for attorney general of Arkansas.

On Tuesday, after confirming that Rutledge had registered to vote in D.C. in 2008 and yet cast an absentee ballot in Arkansas that same year -- weird! -- the Pulaski County clerk canceled her voter registration, which, according to Rutledge, is nothing more than "Chicago-style" politics by dirty Democrats who are trying to smear her good name and rig the election, OF COURSE:

Democrat County Clerk Larry Crane of Pulaski County has displayed a total lack of integrity by using desperate Chicago-style, partisan politics to disenfranchise me--a qualified voter in Pulaski County in an attempt to illegally secure the election for the Democratic Party. This lower-than-low act of political desperation shows just how far the Democratic Party and my opponent will go to try and win an election that they know they are losing.

Rutledge insists it was the clerk's job to inform all the other counties where she'd also registered to vote that she would be voting in Pulaski County from now on. Which appears to be true, except for the part where she subsequently went and registered to vote in those other counties anyway. But it's not like it's her job to know that sort of thing, because the people of Arkansas haven't elected her attorney general yet.

And even if they do elect her, well, the Arkansas Constitution says she wouldn't be able to serve anyway.

No persons shall be elected to, or appointed to fill a vacancy in, any office who does not possess the qualifications of an elector.

This isn't the first time a real live voter frauder person has been busted for trying to do voter fraud. In 2013, Republican Jack Villamaino, who had been running for a Massachusetts state House seat when he was busted for all kinds of voter fraud, pleaded guilty and got himself four months in jail.

There was this charming Wisconsin fellow, a big supporter of Gov. Scott Walker, who was charged with 13 felonies for, you got it, voter fraud.

In the presidential election, Monroe cast an in-person absentee ballot in Shorewood on Nov. 1 and drove a rental car to Lebanon, Ind., where he showed his Indiana driver's license to vote in person on election day, Nov. 6, the complaint charges. Monroe owns a house there, according to the complaint.

But he had a really good reason for trying to vote all those times for all his favorite Republicans: amnesia. He simply couldn't remember that he had already voted for Gov. Walker and Mitt Romney and Republican state Sen. Alberta Darling all those times before. Don't you just hate when that sort of thing slips your mind?

And then there is Mr. Liz Cheney, who was registered to vote in Wyoming -- where Liz has always been from -- and Virginia, "even though he signed a document in Wyoming saying he was not registered elsewhere." It probably just slipped his mind too.

Maybe Republicans who want to impose burdensome voting restrictions have a point. There are bad people out there who are trying to cast fraudulent votes, and the last thing we Americans want are the wrong kind of people stealing our democracy. You know, the lying cheating voter-frauding Republican kind.