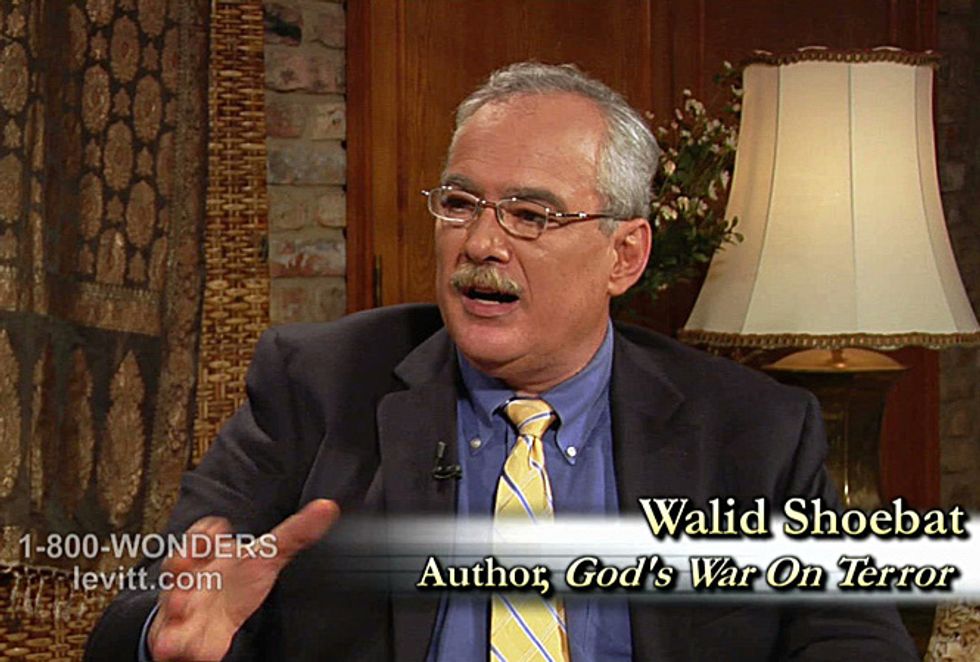 Usually, in times of national tragedy, most people at least try their best to not sound like assholes. It may not always work, and in fact, it often doesn't. But at least there's the effort there. So far, following this weekend's mass murder at a gay nightclub in Orlando, most of your bigger homophobes have been sticking to the "See? Muslims are bad! We told you Muslims are bad, and a Muslim guy did terrorism, so we were right!" line as much as possible, and hoping no one remembers the last 12 horrible things they said about gay people (see Bryan Fischer).

Then, there are those who truly do not give a flying fuck! Like semi-frequent Fox News guest and self-proclaimed "ex-terrorist" Walid Shoebat along with Pastor Steven Anderson, who are both using this tragedy as an opportunity to talk about how they are so not at all sad that a bunch of gay people died.

In response to the shooting, Shoebat, uh, got super mad and anti-Semitic-y about Sam Seder (a Jewish person!) having made fun of him for saying he wouldn't fly in a commercial airplane because the pilot could be Muslim! Instead of complimenting him! Can you believe?

Instead of complementing [sic] us, the mocking liberal Jew Sam, Seder, says that we, not the Muslim “should be under watch.”

This is how the system from media to government repays Christian converts from Islam.

Who is laughing now Mr. Seder? Boy you are dumb and I can’t feel sorry for dumb Jews.

Even when we point a stupid Jew to Evangelical Christians, they too get angry since in their view a Jew can do no evil.

The whole culture is dumber than a nail.

Liberals and gays should all screw each other. Finally I could watch TV and could care less.

The only ones moaning over 50 gays slaughtered are liberals, idiots and gay lovers.

The U.S. supports Muslim terrorists in Syria so long they get at Russia and Bashar Al-Assad and kill Syrian soldiers. And now I am supposed to only care when gays are killed and I am supposed to jump up and down?

The haters of God love death.

The FBI doesn’t care since the system is impossible to fix unless of course to be “Muslim” should be illegal and to be “Gay” should also be illegal since gays are disgusting and are Muslim-loving anti guns.

Agents have their hands tied by politicians and the system will never make this politically incorrect change, so all I can say is “enjoy the death toll.”

Whatever he is saying, it certainly is unpleasant! And don't think he's gonna be cooling it on the anti-gay rhetoric AT ALL in light of the recent terrorist attack, because just today he published another article claiming that "Western Society Will Not Stop Committing Suicide Until Its People Stop Embracing Homosexuality," whatever the fuck that even means.

Pastor Anderson is very happy that there are, in his estimation, fewer "pedophiles" in the world, but SO SAD that this beautiful act could be used to take his guns away or oppose his hate speech!

But the bad news is that this is now gonna be used, I’m sure, to push for gun control, where, you know, law-abiding normal Americans are not gonna be allowed to have guns for self-defense. And then I’m sure it’s also gonna be used to push an agenda against so-called “hate speech.” So Bible-believing Christian preachers who preach what the Bible actually says about homosexuality — that it’s vile, that it’s disgusting, that they’re reprobates — you know, we’re gonna be blamed. Like, “It’s all extremism! It’s not just the Muslims, it’s the Christians!” I’m sure that that’s coming. I’m sure that people are gonna start attacking, you know, Bible-believing Christians now, because of what this guy did.

Oh man, that sure would be totally unfair! It would just be so mean of people if they were to judge Christians who cheered for a terrorist attack, just because it was committed against gay people, like they judge all Muslims! God knows a bible-believing Christian would never go and kill a bunch of people in a gay bar. Except for the all times when they have! And also all the times they've murdered for other reasons!

As of yet, we haven't heard of any prominent Muslims coming out to publicly praise the shooter in this way, for whatever that is worth.