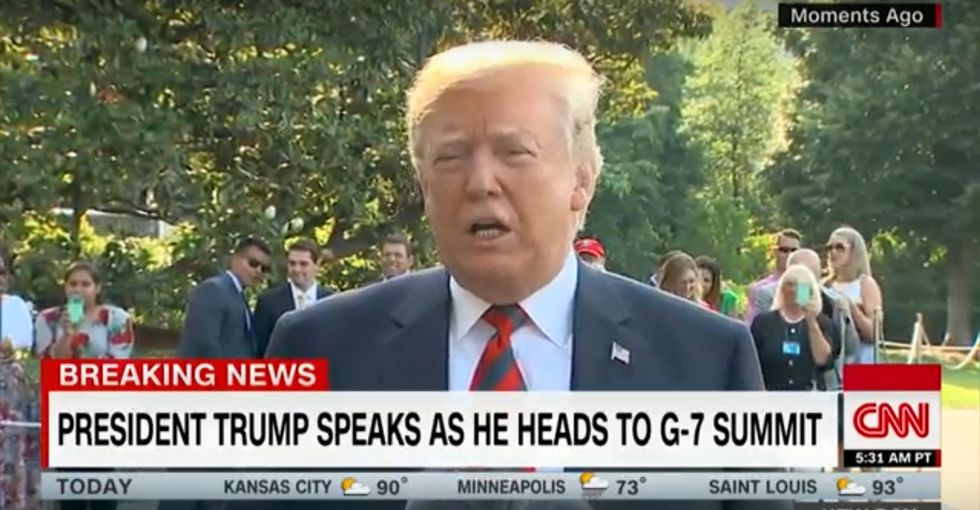 He looks so stank

Donald Trump headed to the G7 summit in Canada today, and boy oh boy was he in rare form before he left. Trump is so sick of Canada and our European allies' bullshit, and by bullshit, he means he's got tariffs on his brain, and that OUR ALLIES are being mean to Vladimir Putin.

Trump said he has been Russia’s “worst nightmare” and he is perfectly right if “worst nightmare” means “faithful stooge and genuflecting sycophant," a guy who rhetorically tosses Putin’s salad with every move he makes concerning Russia. (Here's a really good 'splainer from Josh Marshall at Talking Points Memo about how pretty much every move Trump has made on Russia is working to literally dismantle the Western alliance, which just happens to be Putin's goal. It's terrifying.)

We all know Trump has a history of saying extremely dumb shit right before high level meetings, either out of his own mouth or from the mouths of assholes like Rudy Nosferatu Giuliani. It feels like it was only yesterday (it was Wednesday) when Giuliani was explaining how North Korea was "on hands and knees" just begging to hang out with Trump, and nobody believed a word he said.

There was the Putin shit.

Testy as a potty training toddler, Trump took to the teevee cameras this morning to jumpstart his daily jeremiad about the importance of Putin while he was on his way to the G7:

Viewing Trump's angst over being separated from Putin, one would think the United States hasn't been accusing Putin and Russia of nefarious things they obviously did to subvert our democracy. If I knew Trump I would give him the same pep talk I give anybody with an unrequited infatuation with someone who is playing them for a fool. GO GET YOUR LIFE. Nobody wants to be in a relationship with a Desperate Donald, so you need to work on your own shit. Do you. Unfortunately, it would be terrible advice because Trump is fucking insane and who knows what obsessions he would replace his Putin infatuation with.

Apparently Trump just cannot fathom why people are still pissed at Putin over his takeover of Crimea (which is why Russia got kicked out of what was then the G8 in the first fucking place). And he has been told numerous times that it looks kinda weird for him to promote the exact nation that fucked with the exact election he "won." but somehow he cannot stop himself.

He offered up this amazing pearl of witty wisdom to all and sundry, completely unaware that we all know how to subtract:

Oh, my! You don’t say! Everybody look! Trump learned how to math! Anybody else noticing that it looks like Trump skips ONE HUNDRED PERCENT of his briefings in favor of doing a quick skim (just the bold print for our Stable Genius) of Wikipedia before he runs his mouth?

And then there's all the tariffs shit.

Trump is continuing to stir up the never ending War of 1812, a dispute Trump implied weighed most heavily into his decision to impose tariffs on steel. Apparently, Trump believes the 206 year old conflict between the US and Britain by way of Canada gives him "just cause," if you will, to use "national security" as a reason to tax Canada's ass. Trump reminded Trudeau on the phone recently of how those cantankerous Canadians bodaciously burned down the White House (it was the British), which Trudeau probably parried with some version of, "What the fuck is wrong with you, are you stupid?" Yes, my love, Trump is stupid, please marry us, or be our president instead of him. Melania will be delighted to keep her position as First Lady if Trump goes away and you just walk in and take over.

Trump lashed out on Twitter yesterday and today, super salty over what French finance and economy minister Bruno Le Maire said about the G7 last week, calling it "far more a G6 plus one than a G7." We all know Trump cannot pass up an "I DUMPED YOU FIRST!" moment, but let's keep it real, Le Maire dumped Trump first and it took Trump an entire week to understand what he said and be able to successfully repeat it in context.

It has been a tense and tough G7 — I would say it’s been far more a G6 plus one than a G7,” said Le Maire, who called the tariffs unjustified.

“We regret that our common work together at the level of the G7 has been put at risk by the decisions taken by the American administration on trade and on tariffs,” he said.

Trump, never one to stop mid-meltdown and check himself for acting like an uneducated child emperor also, took to Twitter to bitch and moan and whine and cry about how unfair our allies are to us:

Looking forward to straightening out unfair Trade Deals with the G-7 countries. If it doesn’t happen, we come out even better!

He also took a stab at one of his favorite targets -- Local Milk People -- in order to get his morning dose of “FUCK YOU CANADA!” out of the way:

Canada charges the U.S. a 270% tariff on Dairy Products! They didn’t tell you that, did they? Not fair to our farmers!

Apparently Trump STILL does not realize that pulling out of trade deals has not saved us one penny on Canadian milk or cheese. And also, that if other nations decide to impose tariffs on our produce and products, OUR FARMERS WILL SUFFER EVEN MORE. Plus? Nobody even knows if he even knows what the trade deficit is. Not only will our farmers face suffering from Trump’s trade war, but if you recall, Canada is imposing retaliatory tariffs on steel and aluminum, and Trump is screaming like a stuck pumpkin pig.

Oh yeah, and there was this gem yesterday:

Prime Minister Trudeau is being so indignant, bringing up the relationship that the U.S. and Canada had over the many years and all sorts of other things...but he doesn’t bring up the fact that they charge us up to 300% on dairy — hurting our Farmers, killing our Agriculture!

Trump has arrived in Canada (he was late) and according to the TV, he is getting an icy reception. And apparently he's so frazzled he simply cannot bring himself to stay through the entire summit, so, he plans on skipping the second day and heading to Singapore early for his photo-op with Kim Jong-un.

Maybe he will use that extra Executive Time on Air Force One to pardon Muhammad Ali for his draft dodging conviction that was overturned by the courts nearly 50 ago. Will somebody please explain to this man how life works?

Oh well, another failed summit for our Dear Leader! Nobody coulda seen that one coming.