Walmart Withholds Medicine From Lady Who Miscarried, Because She's Probably A Sinner 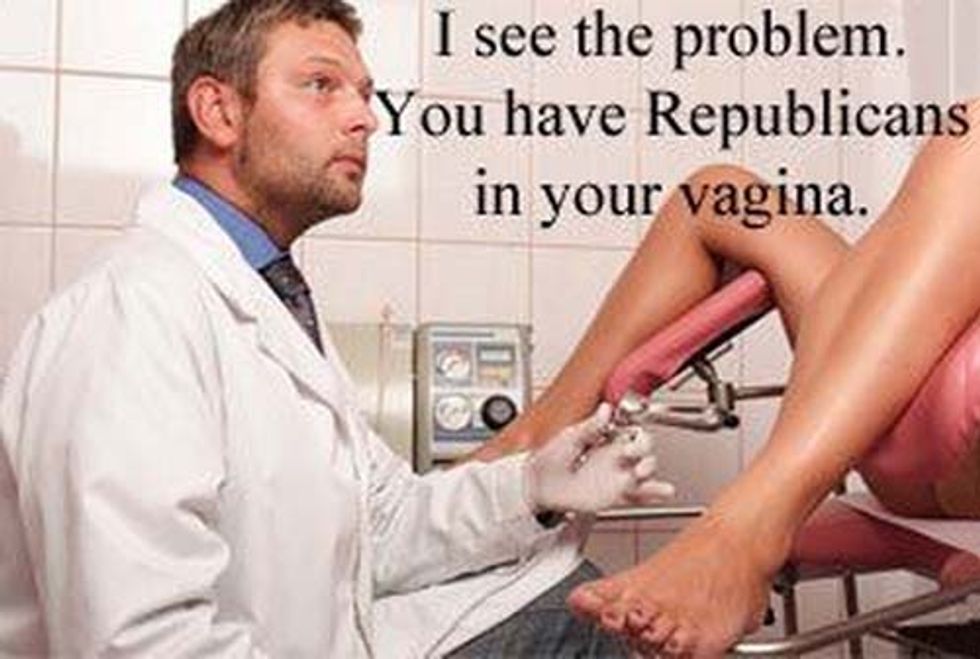 Imagine you are a lady, and you are going through the sadness that comes with a miscarriage. This is one of those times in life, we imagine (as we are a dude), that you really don't want to deal with any bullshit, just a guess? So you go to the doctor, and he gives you a prescription for Misoprostol, which will help your body pass the tissue, instead of having to go through an invasive, unpleasant procedure to extract it. Doc calls your scrip in to the friendly neighborhood Walmart, but the pharmacist refuses to fill it, because Sincerely Held Religious Beliefs. You see, this particular drug can ALSO cause an abortion, which is not a FUCKING PROBLEM if you have already miscarried, now is it? But that is exactly what happened to Brittany Cartrett of Milledgeville, Georgia:

"So we made the decision to not do a D&C and to get a medicine. So he said I'm going to give you this medicine, you'll take it, and it will help you to pass naturally so that you don't have to go the more invasive route", said Brittany Cartrett.

The doctor's office called the Milledgeville Walmart to fill the prescription but they were told no and they were not given a reason.

"So we found another place to fill it but I still had to go up there to get another prescription so when I went up there she asked if I had any questions about this prescription I said no I don't but I do have a question about the other one. And she looks at my name and she says oh, well...I couldn't think of a valid reason why you would need this prescription", Cartrett said.

Oh, so we are not only dealing with a shitty pharmacist, we are dealing with a shitty pharmacist who thinks she's a doctor, since she can't even IMAGINE why Cartrett might need that drug. Maybe for the reason her doctor said? Unfortunately, this is perfectly legal in Georgia! You see, in many states, pharmacists are expected to do their fucking jobs, and fill the prescriptions that come in, doing only and always what's best for their patients, but NOT IN GEORGIA! Nope, in that state, and several others, you can be a pharmacist and hide right behind your religious beliefs, choosing to give your patients subpar care, because you think Jesus is going to condemn you to the lake of fire for doing your job correctly.

It's called a "conscience clause," because conservatives like to give laws names that don't remotely have anything to do with the actual effects of those laws. Pro-life? Sounds nice, but means "right up until the baby is born, but after that, fuck 'em." Pro-family? Family is great, but it really means "fuck the gays." Conscience clause? That's the thing where you went to school for many years to become a pharmacist, and you even got good grades, but you choose instead to believe Pastor Joseph when he says that 'bortion pills can cause 'bortions even when the fetus is already dead, and contraception can cause 'bortions even though it prevents pregnancy so you don't need 'bortions in the first place.

For the record, Walmart's corporate offices are COMPLETELY okay with this! Walmart spokesgoon Brian Nick, in a statement to WGXA, said that "[o]ur pharmacists fill prescriptions on a case by case basis every day in our stores throughout the country and we encourage them to exercise their professional judgment in doing so." That would be so nice, if they were using their actual professional judgment, instead of running everything by Pastor Joseph. Maybe Walmart needs to amend that policy, just maybe?

Several years back, yr Wonkette reported on a Florida woman who was raped, but ended up being arrested when filing her report, due to an old warrant. She was able to get the appropriate pills to prevent pregnancy (which Rick Santorum would remind us is a gift from God, even if it's a rapey gift), but the prison employee responsible for administering the pills wouldn't give her the second one, because Religious Beliefs, and also, Florida has a conscience clause too! She didn't get pregnant, but ugh. Libertarians will just say, "go to a different pharmacist!," but as Editrix pointed out at the time, some counties only have one pharmacist!

But good news, these horrible laws aren't just for abortion and contraception anymore! Due to the fact that the gay agenda is threatening to throatcram even the good, Jesus-y red states, lawmakers are coming up with all kindsa new, fancy ways to use them. In Virginia, recently, state Delegate Bob Marshall has been trying to get a conscience clause passed which would give ANY entity the right to deny any sorts of services or accommodations, due to Jesus thinks gayness is gross.

Of course, again, Brittany Cartrett did not want, or have, an abortion (even though that would be OK too because abortions are LEGAL). She had a miscarriage. But due to the womb-goblin men who pass these laws, and the dingbat "medical professionals" who exercise their rights to be Bad At Their Jobs freely because of them, Cartrett ended up having to work harder than usual, just to get the pills she needed to recover from the incident as quickly as possible.

How's about, instead of passing laws like this, we instead pass "competency clauses," which state that if your religious beliefs don't allow you to do your job completely and correctly, then maybe you are not qualified to have that job and should maybe get a different job. Sounds like a fine fuckin' idea to us.