Was Donald Trump High AF During That Opioids Press Conference? 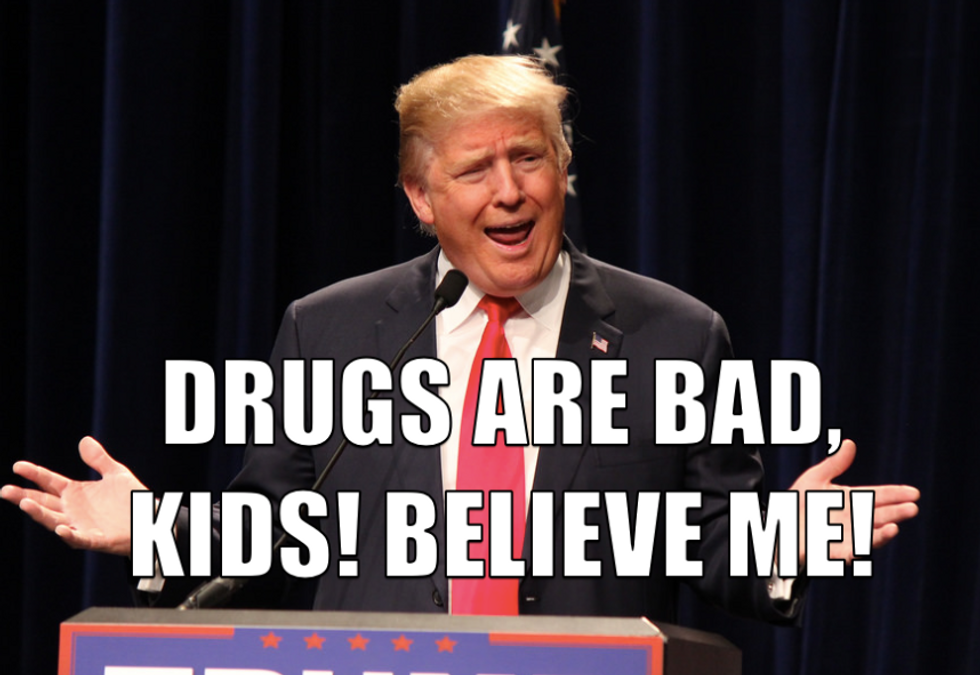 Is it possible that President Trump talked all that smack about North Korea to distract from the shitshow on the opioid crisis? Or was he just tripping his orange balls off? Because that thing was FUBAR!

It started out normal for Trumpland, just the old goat wowing us with his MAJOR vocabulary and RT'ing his pals at the Dick Pic network.

Melania's assistant even tweeted a stock photo of some scary pills to show FLOTUS's deep concern for the youth/people.

But then the White House social media director took half a Valium, just to take the edge off.

Today I'm pleased to receive a briefing from our team on ways we can help our communities combat this absolutely terrible epidemic and keep youth from going down this deadly path. The best way to prevent drug addiction and overdose is to prevent people from abusing drugs in the first place. If they don't start, they won't have a problem. If they do start, it's awfully tough to get off. So if we can keep them from going on and maybe by talking to youth and telling them: No good, really bad for you in every way. But if they don't start, it will never be a problem.

OHHHHH. We'll just tell the kids that drugs are no good, really bad for you. Why didn't anyone think of that before?

But soon there will be a wall with Mexico to keep out all the heroin. And Donald Trump will lock up all the evil pushers in New Hampshire who get rich selling drugs "for less money than candy because there is so much of it." It will be just like the '80s when Republicans solved the crack epidemic with mandatory minimums!

At the end of 2016, there were 23 percent fewer federal prosecutions than in 2011, so they looked at this scourge and they let it go by. We're not letting it go by! [...] The average sentence for a convicted federal drug offender decreased 20 percent from 2009 to 2016.

Fun Fact: In 2010, Congress passed the Fair Sentencing Act reducing the disparity in penalties for powder and crack cocaine. Which Obama signed because he wanted to get drug dealers back on the street to sell heroin obviously, it is just kind of his "thing"!

Then Trump got his "major briefing" off-camera. All the heavy-hitters were there: Melania, Jared, Kellyanne, John Kelly, HHS Secretary Tom Price. They even let the acting head of the Office of National Drug Control Policy sit in, which was a nice gesture, considering the Trump administration plans to cut ONDCP's budget by 96%. This was definitely NOT a charade to make it look like the President is doing something besides golfing and tweeting at the television for two weeks while he's holed up at his trash palace in New Jersey.

LOLOLOL!!! It totally was.

Which would all be HAR-HAR HILARIOUS if drugs weren't killing at least 59,000 Americans per year. The President's own Commission on Combating Drug Addiction and the Opioid Crisis just issued an interim report with several specific recommendations, including:

But all of that COSTS MONEY. And, Hellloooo!!! The Trump administration is gearing up to give all the money away to rich people this fall. So instead the nation got a healing press conference with Tom Price and Kellyanne Conway.

Kellyanne said something or other about drugs being everywhere and terrible. Honestly, all we ever hear is her Jersey accent.

Kellyanne Conway on the opioid crisis: “No state has been spared and no demographic group has gone untouched” https://t.co/fX1VsGjtqF