Was Mark Halperin Total Dick About Dog On Plane? We're Only Asking WHO'S A GOOD DOG? 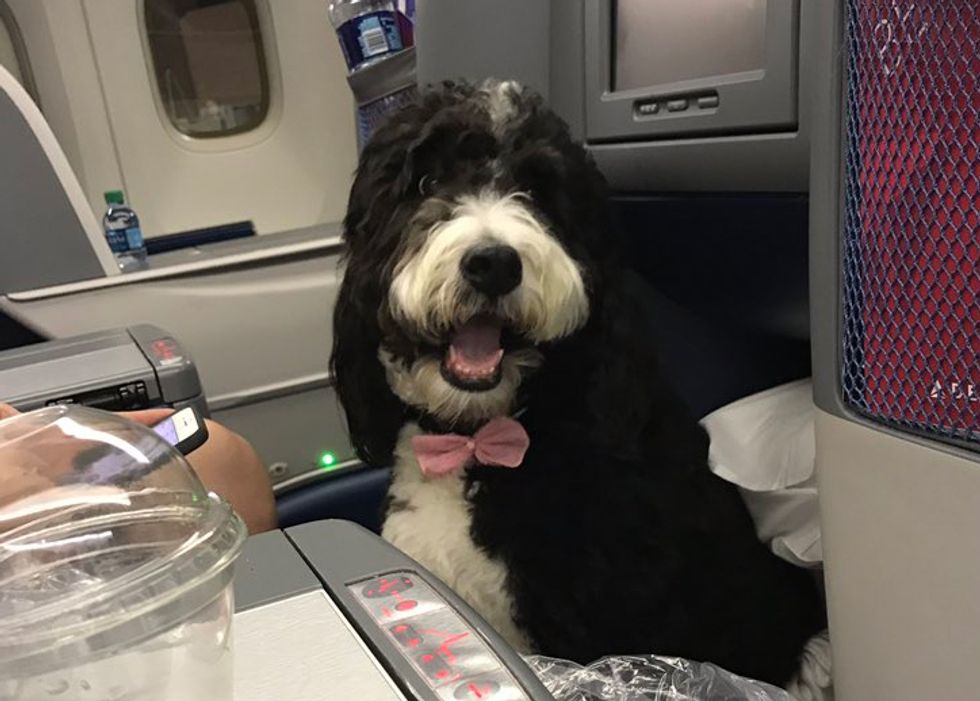 Seriously, would any jury in the world side against this doggo? Nope.

Look, we know North Korea is talking about nuking an American aircraft carrier once it finally shows up, but that's not going to happen, probably, and besides, this is far better news from the weekend: "Famous Journalist" Mark Halperin was on an airplane, seated in first class on a Delta red-eye, and got all the dog-lovers on Twitter mad at him when he Tweeted what sounded like an indignant whine about having to sit next to a service dog in a bowtie named Charlie (Charlie is the dog, not the bowtie, and she is a bitch, but not as much as Halperin sounds like):

After a bajillion dog lovers responded by swatting him with virtual rolled-up newspapers for making a mess, Halperin tried to clarify that he was concerned that the doggo was not seated with its owner, and yes, Halperin thinks service dogs are the best, and you people should go bark at Delta for being the bad guys:

In subsequent Tweets, Halperin clarified his clarification: You might see the owner's knee in the photos, but the owner was only visiting the seat to get Charlie settled in before takeoff, and yes, Halperin says, he definitely offered to switch seats with Charlie's person, who was seated across the aisle. (That question came from former Wonketeer Jesse Berney! Hi, Jesse!)

As Jesse wisely observed, the original photo certainly didn't suggest anything of the sort. Halperin insisted everyone had him wrong: From the first, he was only thinking of the good of Charlie and her person, so please stop pelting him with barf bags full of kibble now, please!

Oh, but this was far from over! Charlie's human, Anthony Pisano, a flight attendant for Delta, doesn't remember it that way, and we can hardly wait for the Kurosawa-esque epic film to be made about these wholly divergent accounts of the incident. Pisano explained that he'd bought first-class seating with Charlie directly across the aisle in an A - BC - D seating arrangement:

I had purchased 6A and 6B and Halperin was in 6C. The dog and I fly back and forth from California to NY 2–3 times a month. I am always aware to make sure to get the dog her own seat (she lays on the floor and sleeps) to ensure she doesn't encroach anyone’s personal space. So I put Charlie (the dog) in 6A where she was great. She was in arms reach and everything was cool. Right before we took off the dog came and sat in between my legs for take off so she was secured. At this point halperin (I had no idea who he was) calls for a flight attendant and tells her that he refuses to sit next to a dog. Those were his exact words. At that point I noticed he took a picture of the dog which I just ignored. Next thing you know the lead flight attendant asked if I minded giving halperin 6A. It was so strange he wouldn't even look or speak to me about it. If he would have asked me I would have obliged, no big deal. I couldn't believe how rude this guy was carrying on as I sat right next to him. So I obliged, he moved into 6A and left his shoes and a mess in his little first class cubicle area. I politely brought him his shoes and belongings to which he literally looked the other way and that was that. I then woke up this morning to a friend sending me the article and was in shock reading his tweets. Mind you Delta did absolutely nothing wrong, the flight attendant were extremely accommodating to his wishes all while trying to make sure I wasn't upset in any way. They handled the situation kindly and professionally.

Unfortunately, Charlie has so far elected not to go on the record about the incident, so it's the word of Highly Respected Trump Fanboi Hack Mark Halperin, who doesn't journalism very good, or Anthony Pisano and Charlie, who is adorbs and could be an ad for Dogs all by herself. Pisano made a Twitter account just to let Halperin know there were no hard feelings:

Also, the ever-wonderful WeRateDogs Twitter account has weighed in, and is decidedly on Charlie and Pisano's side, though they may be a bit biased, and got Charlie's sex wrong. (Do dogs have gender? Gender is socially constructed, and dogs are very social, so maybe dogs do have gender.)

A DISSENTING OPINION FROM YOUR EDITRIX!

I am not really following what Anthony Pisano says happened. He bought two seats together? But then switched with Halperin so Halperin wouldn't be next to the dog? And dude buys a full price seat for his dog two to three times a month? In first class? But he is a flight attendant? NONE OF THIS MAKES ANY SENSE AND I DO NOT BELIEVE IT AND I HATE TO BE TEAM HALPERIN HERE BECAUSE FUCK THAT GUY but not everybody loves dogs, even the best dogs like Charlie in her butch bitch bowtie?

The whole thing just stinks, is all I'm saying. RASHOMON OUT.

Yr Wonkette is supported by donations from readers, although head pats are nice, too. Please click the Donate" linky below! Who's a good reader? Is it YOU? Is it YOU? YES IT IS!