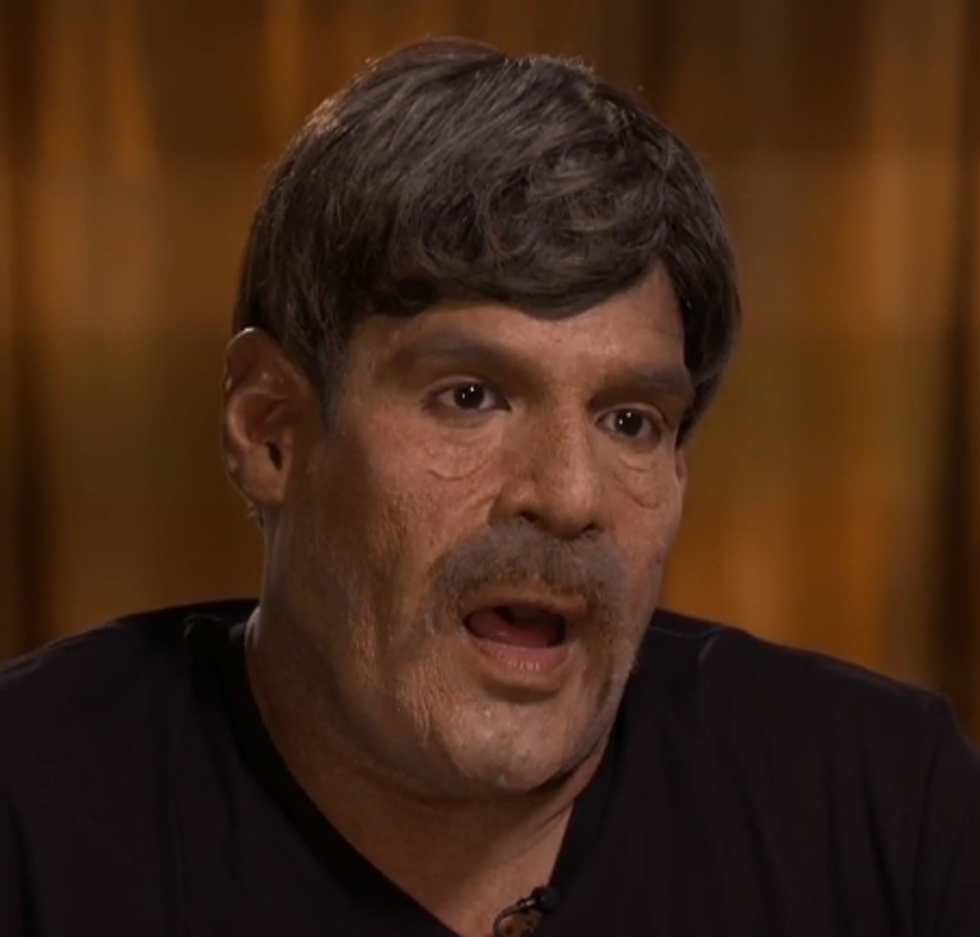 In an interview with Univision, this man, who went by "Miguel" and wore a disguise, claimed to have been the lover of Omar Mateen. Hm!

Guys, we would like to start out by saying there is more ALLEGEDLY in this story than you can possibly shake a stick at. THAT BEING SAID ...

Univision has an interview with a man who claims to have been at one time the gay lover of Orlando mass shooter Omar Mateen. In the interview, he goes by "Miguel" and his face has been altered. Nonetheless, he makes quite a few interesting claims about what might (MIGHT!) have motivated Mateen to murder 49 people in the Pulse gay nightclub on Latin Night. His claims would also suggest that, as many have suspected, Mateen specifically chose Latin Night, as opposed to other nights that were less Latin.

What Univision has confirmed is that the FBI has spoken to this man. However, the FBI has not confirmed his claims. But let's see what he has to say:

Omar Mateen, the Muslim gunman who committed the Pulse nightclub massacre in Orlando, was "100 percent" gay and bore a grudge against Latino men because he felt used by them, according to a man who says he was his lover for two months.

“I’ve cried like you have no idea. But the thing that makes me want to tell the truth is that he didn’t do it for terrorism. In my opinion he did it for revenge,” he told Univision Noticias anchor Maria Elena Salinas in an exclusive interview in English and Spanish on Tuesday.

He said Mateen was angry and upset after a man he had sex with later revealed he was infected with the HIV virus.

[wonkbar]<a href="http://wonkette.com/602953/orlando-shooters-wife-maybe-knew-all-his-murderous-plans-so-thats-just-great"></a>[/wonkbar]Holy shit, if true. "Miguel" also says he's pretty sure Mateen's wife knew he was gay. Remember her? The one who drove him to Pulse several times and may have had prior knowledge of his plans? Yeah her.

"Miguel" also says that Mateen "expressed frustration over his father's extreme views on homosexuality, which included a belief that 'gay people [are] the devil and gay people have to die.'" That jibes with the video the father released, saying that his son shouldn't have murdered all those homoqueers because God would have finished them off all by Himself.

[wonkbar]<a href="http://wonkette.com/602935/sounds-like-orlando-gay-club-shooter-was-raging-closet-case-bet-you-didnt-see-that-coming"></a>[/wonkbar]Know how we've been saying that there are so many angles to this story they make a rhombus look like a sad, dumb shape that doesn't have near enough angles? The proliferation of guns, a possibly raging closet case suffering from shame stemming from conservative (in this case Muslim) religious belief, and an in-the-moment pledge of allegiance to ISIS alone would make for a complicated story.

[wonkbar]<a href="http://wonkette.com/602886/are-the-orlando-gay-club-shootings-about-you-or-should-you-stfu-a-wonksplainer"></a>[/wonkbar]Add to those things the possibilities that (as our original theory suggested) Mateen had been in relationships with men, that Latino men specifically may have been the objects of his affection, and that he felt rejected and perhaps jilted by them. Put all those together in a soup and then stir in possible HIV panic and, like we said, holy shit, if true.

We assume we will hear more and more in the coming weeks and months, as the FBI learns more and more about what exactly happened here. As Univision reports, Attorney General Loretta Lynch said Tuesday that it's possible that we may "never pinpoint a single motive" for what happened in Orlando on that awful Sunday morning.

We're inclined to agree with that, but boy oh boy, this story sure does keep getting more tragic and more complicated every day.