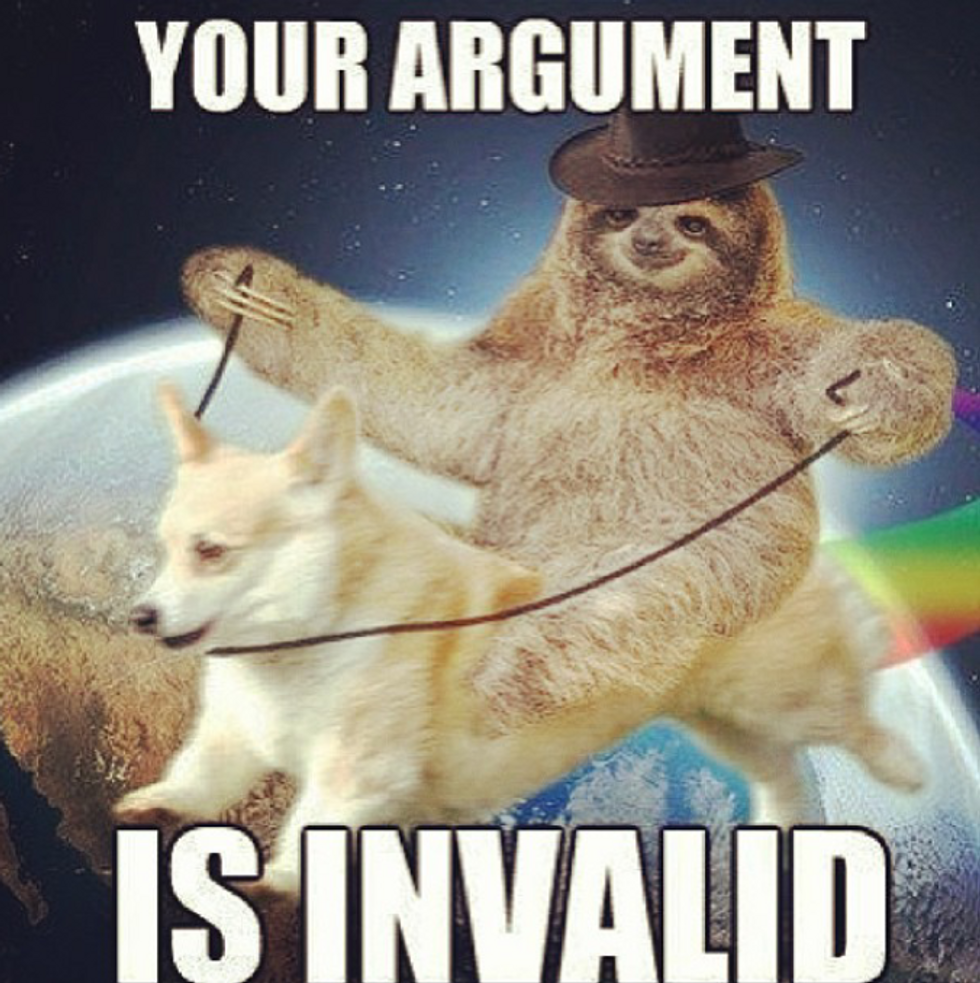 Let’s look at the Washington Post, so we can learn a really great #SlatePitch from a writer called Jeff Guo, about how Donald Trump doesn’t hate gays, but is rather doing the yeoman’s work of teaching the GOP how to love them in their own way:

... Trump has refrained from launching barbs at one particular group: gay Americans.

It would be a stretch to call Trump a gay-friendly candidate — he still opposes same-sex marriage — but he supports other LGBT rights and has publicly declared himself a “real friend” to the community. In April, he broke with his GOP rivals by speaking out against North Carolina’s anti-transgender bathroom law.

(He later backed off.)

[wonkbar]<a href="http://wonkette.com/602928/lets-explore-the-ways-donald-j-trump-is-a-great-friend-to-the-lgbt-community"></a>[/wonkbar]We've examined Trump's relationship with the gays before, and the truth is that he either loves them or loves them not, depending on to whom he is talking. Or he loves gays when it gives him an opening to talk shit about Muslims, which goes over well with his pant-shitting supporters.

But that is the writer's point, as it turns out! Trump is inciting hatred against Muslims, and in his sneaky way, is using that to teach the GOP to love the gays SO HARD:

In the wake of the shooting at an Orlando gay nightclub, where a man pledging allegiance to the Islamic State killed 49 people, Trump connected his sympathy for the LGBT community with his suspicion of immigrants and Islam.

“Hillary Clinton can never claim to be a friend of the gay community as long as she supports immigration policies that bring Islamic extremists to our country and who suppress women, gays and anyone else who doesn’t share their views or values,” he said in June. [...]

Trump alluded to this idea again last month in Cleveland, where he apparently became the first Republican presidential nominee to reference gay people in his acceptance speech. “As your president, I will do everything in my power to protect our LGBT citizens from the violence and oppression of a hateful foreign ideology,” he said at the GOP convention.

Isn't that heartwarming? Trump will Make America Great Again by teaching Republicans that God Hates Muslims More Than He Hates Fags. Put THAT on a hat.

Would this be a good time to mention that Trump is speaking to an INSANE right-wing gay-hatin' summit this week in Orlando, exactly two months after the horrific anti-gay shootings at the Pulse nightclub? Right Wing Watch splainered it very nicely:

Republican presidential nominee Donald Trump is scheduled to attend a radical anti-LGBT event being held in Orlando this week ...

As we reported last week, Florida Sen. Marco Rubio and a host of anti-LGBT extremists are slated to address the “Rediscovering God in America” event, which is sponsored by the American Renewal Project.

Self-described “political operative” David Lane founded the American Renewal Project as a way to mobilize conservative Christian voters and inspire right-wing pastors to run for elected office. He told Jacobs that he intends to quiz Trump on how he plans to fight “homosexual totalitarianism” and the gay rights “militants.”

How nice! Featured guests include Kim Davis's queer-hatin' lawyer Mat Staver and insane "historian" David Barton, who, as Right Wing Watch points out, "thinks that God is justly preventing a cure for HIV/AIDS because it is a divine 'penalty' for homosexuality." What a nice event that will surely be for Trump! We're sure he will teach them how to love gays more, by yelling incoherent bullshit about the Islamics.

Let's return to the WaPo for a moment, where the writer discusses how attitudes on LGBT issues are changing, even among Trump-loving Republicans. That is true! But then he makes this questionable assertion, and when we say "questionable," we mean "bullshit":

That is not true! The GOP platform (READ IT RIGHT HERE!) pointedly comes out against the Supreme Court's "redefinition of marriage," which is code for God Hates Fags. It comes out against the repeal of the Defense Of Marriage Act, and includes a bunch of "religious freedom" horseshit about people being able to "conduct their businesses in accordance" with their religious beliefs. It has coded language about how every kid deserves a "married mom and dad," and comes out against Title IX being used to prohibit discrimination against transgender people, or even considering sexual orientation as a factor.

And, insanely, under the heading of "Protecting Individual Conscience In Healthcare," it says, "We support the right of parents to determine the proper medical treatment and therapy for their minor children." Funny story: the insanely anti-gay Tony Perkins of the Family Research Council fought tooth-and-nail for the inclusion of that line, because it is a veiled signal of support for "ex-gay" conversion therapy. YUP.

So, though attitudes are changing, the GOP platform is still a cesspit of homophobia. And we are sorry, but the fact that Trump gets people to cheer for protecting gays from the scary ISIS Muslims doesn't exactly lead us to believe that he's some warrior out there, changing hearts and minds in the Republican Party on LGBT rights.

So, uh ... what is it we say in the journalism community, when the entire premise of somebody's argument is wrong? Oh that's right. We say, "eat a dick, wrong person, because u r wrong."