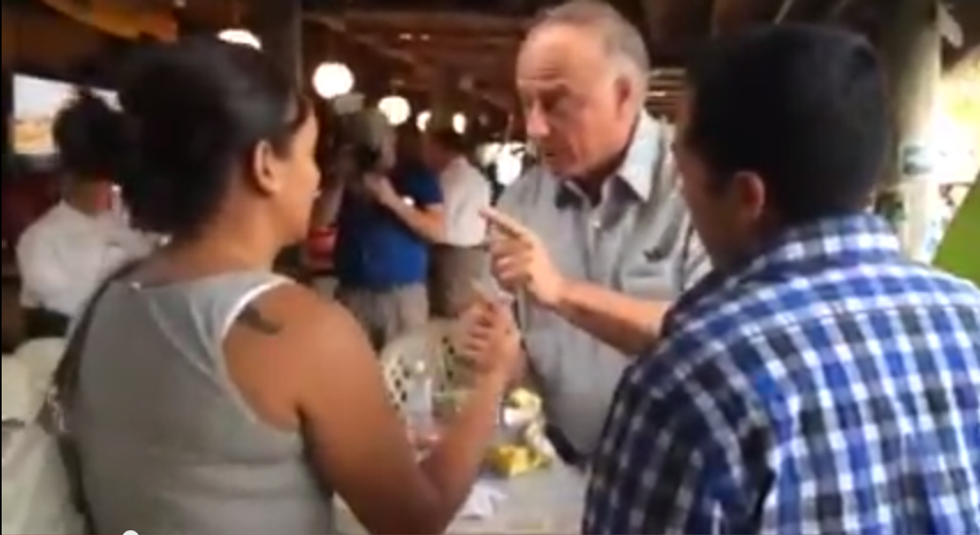 Meet your new hero, America. Her name is Erika Andiola, and she's a "Proud Undocumented and Unafraid Mexican-American." If you watch the video -- which you MUST do, RIGHT now, go on, we'll wait for you -- you'll see why.

Here's the "Oh, I never watch the videos" summary for you, jerks:

At a fundraiser for Rep. Steve King, hosted by Sen. Rand Paul (aww, isn't that sweet?), our new hero Erika approached the table and very politely introduced herself.

"I'm actually a DREAMer myself," she says. "I'm originally from Mexico, but I've been raised here." She tells him she graduated from Arizona State University, and that's when, if you watch the video like you were told to do, you'll see Sen. Rand Paul quietly pick up his drink and leave like sticking around to talk about immigration with an actual immigrant who's affected by immigration policy is not on his schedule for the day, thanks.

That's when Erika goes from hero to superhero.

And that's when she hands him what presumably is the Deferred Action for Childhood Arrivals documentation that King and his fellow Republicans are so eager to run through the shredder because "rape paths" and "death trains" and drug mules dressed up as children, doing 9/11 to America. And this young woman, this superhero, politely puts herself right in his face and asks him why he says the things he says, why he wants to rip up her papers and kick her out of the country that is her home.

And in return, he grabs her hand -- and no, Steve King, it is NOT okay to do that, you do NOT just grab people you don't know so you can shake your finger in their face -- and tells her, "You're very good at English, you know what I'm saying."

"I was raised in the United States," she reminds him.

You should watch the whole thing. You really should. The part where he asks her if she's a drug-smuggler. The part where he asks her, AGAIN, if she understands English. Duh, Steve, she's speaking to you in English, isn't she? Do you understand? The part where he insists the "liberal left" takes all of his hatred out of context, that when he talks about the evil brown not-Americans, he is ONLY talking about the evil drug-smuggling ones. Not the ones like Erika, the ones who've grown up here and graduated from college and yes, STEVE, they speak English.

That's when Erika's companion, Cesar Vargas, explains that he has also grown up in this country, he's graduated from law school, and he wants to serve his country. The America one, the one he's known since he was five years old, and why does that make Steve so angry, huh? Then King babbles on about Obama and the Constitution and blah blah blah typical Steve King Republican blah.

Just watch it. And then watch this bonus follow-up, where King talks to reporters and explains that he's the victim because these law-breaking kids of law-breaking parents just came to make a scene, but at least he didn't run away from their questions like SOME people, ahem.