We Are Sure Mitt Romney's Lady-Binders Are Nothing Like Outlaw Mormon Sect 'Joy Books,' Because That Would Be Gross 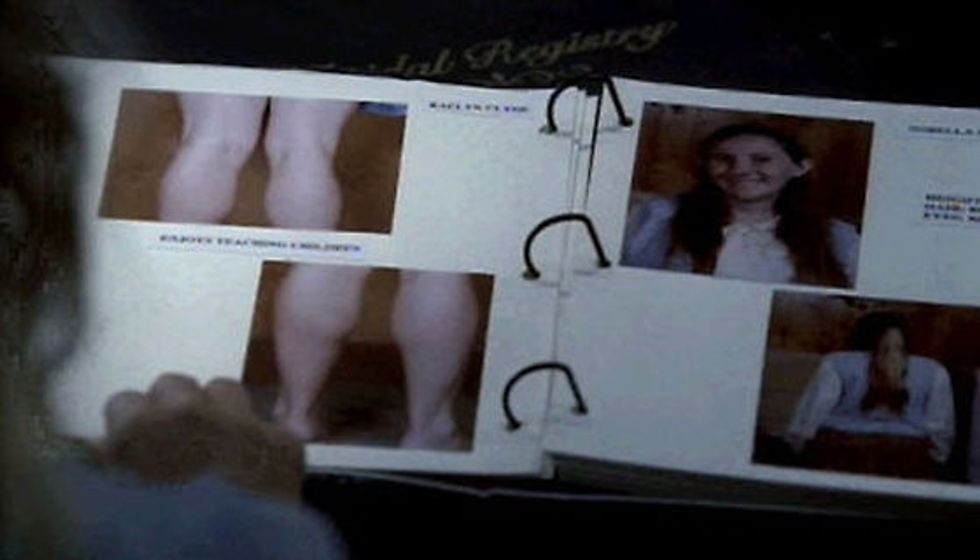 We are sure we will eventually get around to the many, many, many fumbles and bizarrities of Ol' Miffed Romney's trip to Knockout Town last night, maybe, if anyone shows up to work today, but of course all any of you want to know about is the BINDERS. (Unless you are Tucker Carlson or Mickey Kaus, and then you want to know why stupid Candy Crowley thinks "act of terror" and "terrorist act" are the same thing, stupid Candy Crowley.) The women! They are IN THE BINDERS! Will no one free them from their three-ring Trapper Keeper hells?!

You doubtless already know since it's gotten like 125,723 million visits already, but our Boston buddy David S. Bernstein (who was not the Boston buddy we dropped the acid with) has thoroughly debunked Sad Miffed's attempt to paint himself as Square-Jawed Romance Novel Hero Miffed, Good and Noble Hirer of Ladies For Jobs With Flex-Time and Stuff. It is sad, his credit-taking attempts, though really much less of a revisionist history than claiming he was bipartisan in Mass because he had to work with a Democratic legislature (who overrode his 800 vetoes 707 times, not kidding), and so much less of a blatant lie as most words that ooze from his mouthhole.

Here, let us steal much of Bernstein's post, we are sure he doesn't mind:

And I -- and I went to my staff, and I said, "How come all the people for these jobs are -- are all men." They said, "Well, these are the people that have the qualifications." And I said, "Well, gosh, can't we -- can't we find some -- some women that are also qualified?"

And -- and so we -- we took a concerted effort to go out and find women who had backgrounds that could be qualified to become members of our cabinet.

I went to a number of women's groups and said, "Can you help us find folks," and they brought us whole binders full of women.

I was proud of the fact that after I staffed my Cabinet and my senior staff, that the University of New York in Albany did a survey of all 50 states, and concluded that mine had more women in senior leadership positions than any other state in America.

Now one of the reasons I was able to get so many good women to be part of that team was because of our recruiting effort.

Not a true story.

What actually happened was that in 2002 -- prior to the election, not even knowing yet whether it would be a Republican or Democratic administration -- a bipartisan group of women in Massachusetts formed MassGAP to address the problem of few women in senior leadership positions in state government. There were more than 40 organizations involved with the Massachusetts Women's Political Caucus (also bipartisan) as the lead sponsor.

They did the research and put together the binder full of women qualified for all the different cabinet positions, agency heads, and authorities and commissions. They presented this binder to Governor Romney when he was elected.

So yeah, Romney didn't actually care probably, and wasn't that much of a romance novel hero really (except for that time he heroically helped another rich dude tie up his yacht), and somehow hadn't been concerned by the missing vag all those years he was running all those companies.

So yeah we got all the way to the end of this post without actually talking about the "Joy Books" in the title, because "Joy Books" make us feel sad and gross. And it's not like Mitt Romney ever availed himself of "joy" -- he is married to Egg Romney, for pete's sake!