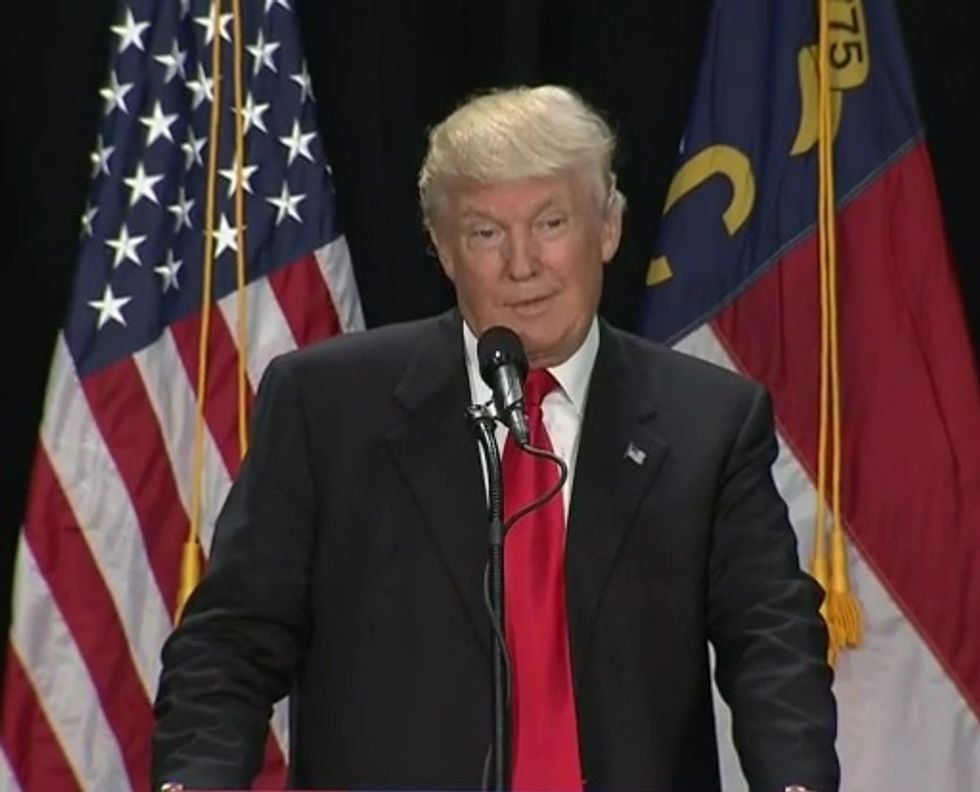 The other day, the Internet was pretty mad at a very stupid piece by Politico -- we know, BREAKING NEWS! -- that counted up some "lies" by Hillary Clinton, and included this as one example:

3. Trump’s “economic plans would ... include an estimated $4 billion tax cut for his own family just by eliminating the estate tax.” (the New York Times, Sept. 21)

The accuracy of Clinton’s claim depends on Trump’s net worth — a matter of dispute. Trump has claimed he's worth $10 billion. If so, the Wall Street Journal reports that applying a 40 percent estate tax rate (which applies to wealth above $10.9 million), Trump would have to pay about $4 billion in the estate tax. Analyses by Bloomberg News and other organizations, however, pegged Trump’s net worth closer to $3 billion, meaning his estate tax payment would be closer to $1.2 billion.

The Clinton campaign responded: “If Donald Trump admits he is lying about his net worth we will happily revise the estimate down.”

But why does Donald Trump keep blithely saying he is worth $10 billion? (He has been lying about his net worth for decades -- see this Vanity Fair story and marvel at how much the candidate hasn't changed one bit, ever, and how casually he lies about things, and how easily they caught him, over and over.)

Trump pays far more in taxes than Hillary. How? All those people he employs pay taxes.

Donald Trump thinks he is worth $10 billion because he counts all his employees' income as his own. Sort of like when your boss says "I PAY YOUR RENT," because your boss is a real piece of shit. Or when your boss thinks he has some sort of say over what birth control pills you can buy with your own insurance, because it is somehow his money, and also the Supreme Court is a little bit of an asshole.

Anyway, if we multiply 34,000 employees by $100,000 (lol, you know Donald Trump pays people so good) and then add in the value of all their houses (but don't forget to not count their mortgages, because Donald Trump never counts what he owes on his mortgages as somehow detracting from his P&Ls), and their neighbors' houses probably, you still ain't getting anywhere close to $10 billion.

(Note to the sage chin-strokers on Twitter agreeing with Mr. Bill Mitchell, above: no, he doesn't pay property taxes either; he gets "breaks" and "abatements" and "money that was supposed to go to 9/11 victims.")

So if none of that is the answer, maybe the answer is he is just lying, like a common Hillary Clinton?

I guess we will just never know.