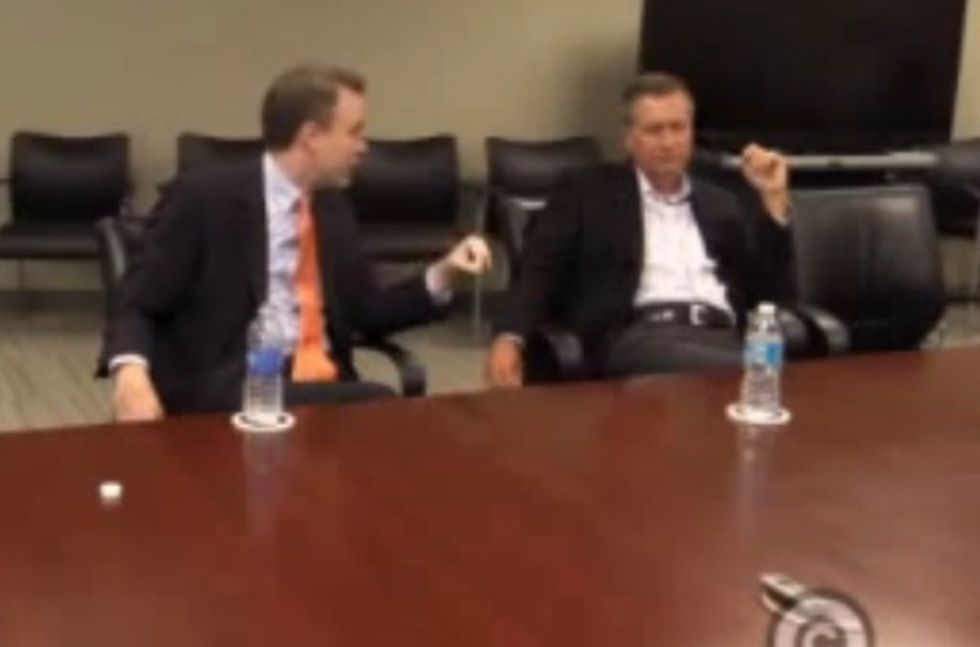 Yesterday we brought you the odd story of the Disappearing John Kasich Video, in which we learned that the Cleveland Plain Dealer's corporate overlords, Northeast Ohio Media Group, (call 'em "NEOMG," because "Ni! OMG!" is fun to say) had removed a video of its editorial board meeting with Ohio gubernatorial candidates for an endorsement interview.

According to Ohio political blog Plunderbund, Kasich was quite the pissy little douchecanoe at the meeting, refusing to acknowledge the existence of Democratic candidate Ed FitzGerald. Kasich slumped in his seat like a bored student and repeatedly talked around questions instead of answering them. And yet the Plain Dealer endorsed Kasich anyway, because he reminds them of Reagan or something.

After NEOMG pulled its video of the full meeting from the Plain Dealer website (leaving an audio-only version up), Plunderbund posted to YouTube a clip that it had captured from the longer video, showing Kasich pointedly ignoring Democratic candidate FitzGerald and refusing to answer a question about why he'd signed a bill preventing rape crisis counselors from telling rape victims that abortion might be one of their options. NEOMG immediately sent a very scary lawyerly takedown letter to Plunderbund, threatening all kinds of legal hell for infringing copyright of an intellectual property that it had chosen to hide itself. And we wondered just why it was so important to NEOMG to keep people from seeing video of its preferred candidate acting like a pissant.

Well, this being the internet, and digital files being endlessly reproducible, some smartass sent us a link to another copy of that clip. But you still can't watch it because that's already been taken down for "copyright infringement" as well. But would you believe that there are still other copies out there? We don't expect that this one will stay up long, either, so we've transcribed much of it, just in case:

FitzGerald wants to know why Kasich signed a budget into law that included certain provisions regarding women’s health care that, FitzGerald says, "don’t belong there." Then he gives a very specific example: Ohio's gag rule on rape crisis counselors.

So for instance, one specific, really pernicious provision that was in there, that you signed into law, Governor, was that a rape crisis counselor is limited in terms of the advice and counsel that she can give the victim of rape or sexual assault. And you’ve never explained what problem you thought that was solving. And I hope you don’t just fall back on your usual kind of generic statements that you’re pro-life, or that you have sympathy for people that have gone through sexual assault.

Why was it important to have a piece of legislation that literally imposed a gag rule on rape crisis counselors?

Kasich says nothing. In fact, he acts as if nobody in the room had been speaking.

One of the editors prompts him: "Would you like to answer that, Governor?"

"Do you have a question?" Kasich responds. The editor then tries to explain the question FitzGerald just asked. As much as the editor understands the question, anyway.

"I assume that it had to do with, uh, there were limits on what they could say about having abortions," the editor says.

Kasich still says nothing, possibly because the reporter made the mistake of mentioning FitzGerald's name while summarizing the question. Once more, Kasich spreads his hands and asks, "I mean, did you have a...?" At which point FitzGerald jumps in and explains to the clueless reporter, "He's trying to pretend he didn't hear me say it, so you need to repeat it." Kasich almost gives away the game by laughing at this remark from someone he very pointedly is pretending is not there.

The reporter gets through the question, as if it had not been asked several times by FitzGerald. Finally, there's a response. Sort of:

KASICH: I think everybody here knows that I’m pro-life. We also know that we have Roe v. Wade. And we’ve been debating this. It doesn’t matter whether you’re Republican, a Democrat, liberal or conservative, or non-aligned. This debate has gone on for a very long time.

What we focus on -- and what I’ve always focused on -- is the issue of life. Prenatal. Postnatal. Early childhood. Sleep for babies. Trying to drive down infant mortality. Let’s focus on the life issue. I mean, focusing on abortion or you’re pro-life or whatever -- again, this issue’s gone on forever. So I just, you know, there’s no hiding the fact that I have a pro-life position.

FITZGERALD: Why is it pro-life to have a gag rule for a rape crisis counselor? You didn’t answer their question.

EDITOR: I think he answered okay.

FITZGERALD: He has never -- with all due respect -- he has never once said why it was good public policy in the state of Ohio for a rape crisis counselor to be limited in what she can advise a victim of sexual assault. And he didn’t answer it then. He started talking about prenatal care and making sure that kids get enough sleep. He will not answer this question.

EDITOR: What I heard the governor say is that he’s pro-life.

Well, sure that's what Kasich said. But that still didn't answer the question, did it? FitzGerald points that out, then Green candidate Anita Rios explains why she supports abortion access for women, especially poor women, and finally another editor chimes in, a female editor, to try to get Kasich to answer the pending question:

EDITOR: Governor, let me push you on that a little bit more. Because if I’m a female voter, and I’ve been raped, and I go to a rape crisis counselor, I’m not going to be able to get the information I need to make a decision. What are you trying to tell that voter?

KASICH: I’m not trying to tell them anything. The voters in this state, I think by and large, know I’m pro-life. And let me just say that what Ms. Rios was just saying -- I mean, this has been a debate that’s gone on since I’ve been around politics. We have Democratic women who are fervently pro-life. We have Republican women who are not. I mean, that’s just the way it is. And so what I choose to focus on is that we can debate this all day long. But at the end of the day, I respect people that have a different position beyond that. But they need to understand my position. It’s just that simple. I’m pro-life.

EDITOR: Yeah, but you did mention Roe v. Wade --

KASICH: And there’s restrictions -- we know what the federal laws are, and we have to be in compliance with them. And it’s just the way it is.

EDITOR: And a gag rule, you think, on a rape crisis -- giving a woman her entire panoply of decisions she can make --

KASICH: We certainly want to care. I actually believe in the exception of rape, incest, and life of the mother. Okay? But look, at the end of the day, I’m going to do what I think is a pro-life -- you know, looking, being in a position of being pro-life. There’s nothing more I can say about it. I’ve said everything there is to say about it.

FitzGerald again points out that Kasich still hasn't answered the question, nor has he explained how he could claim to support abortion in cases of rape, and yet still stand behind the gag rule preventing rape counselors from even discussing abortions with rape victims. But at this point, the male editor considers the subject covered and says, "Let's move on."

In the entire six-minute clip, Kasich has given a boilerplate speech about just how pro-life he is, but he never answers the question about the gag rule he signed into law. He doesn't even acknowledge the question. It's just not what he wants to focus on, and therefore it does not exist. Just like his Democratic opponent. And apparently, at least for one of the editors, that's just fine. In fact, that's such a just fine answer, the newspaper endorsed him for re-election!

We'd love to know why the editors were satisfied with Kasich's non-answer. We'd also love to know more about the decision to remove the video from the Cleveland.com website (whose logo looks disconcertingly like a "copyright" symbol), and whether the Plain Dealer agreed with its corporate overlords that it was a good idea to remove a pretty important tool for assessing the candidates. If anyone at the Plain Dealer wants to contact us, please send an email to doktorzoom at wonkette dot com; we promise to identify you only as "Reporter X" or "Anonymous Source Zero-Q" or maybe as "mediocre but inexplicably Pulitzer-nominated editorial cartoonist Jeff Darcy." And yeah, we're sure that this newest YouTube version isn't long for the world, but we also bet that other copies will pop up. Fair Use has a posse.