We Must Pay West Virginia To Mine More Coal, So We Can Fight The Kaiser! 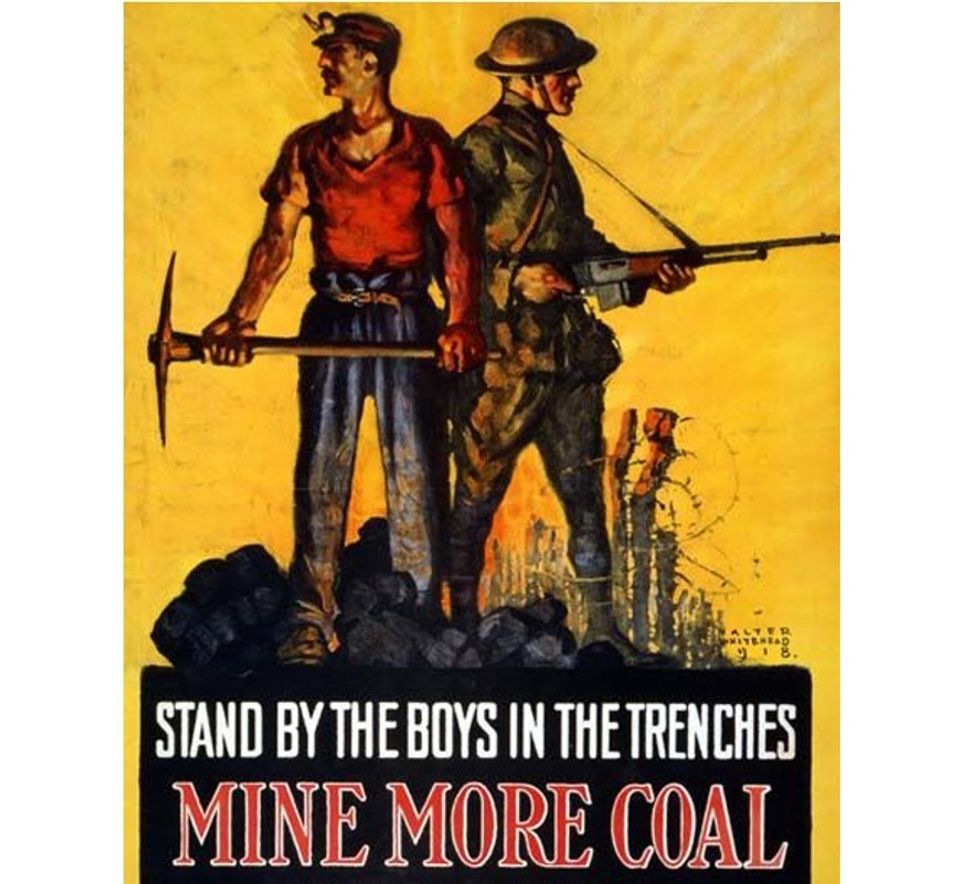 Help save food: No more onions on your belts!

New West Virginia Gov. Jim Justice, who made a big show of switching his party affiliation from "D" to "R" at that Donald Trump rally last week, has a heck of a nifty idea for how the president could pay him back for his loyalty: How about bringing back the coal industry by having the federal government subsidize Appalachian coal, for national security, don't you know? You wouldn't want the nation to be without energy in the case of a major terrist attack, now would you? And since few power plants really want to switch back to coal, a federal strategic Eastern coal reserve may be the only way to bring back all those coal jobs Trumped promised.

Besides, it's not about coal profits, it's about National Security, Justice said with the unimpeachable sincerity of a used-car salesman with plaid pants and a white belt:

Justice says he's been to the White House twice in the last three weeks -- yep, before his big party switch -- so he could pitch the very important national security plan. You see, the problem is that western coal is a lot cheaper to mine than the stuff that's left in the over-mined east, so if you can make up some kind of nutty terrorist scenario where terrorists somehow manage to cut off gas pipelines AND all shipping from the west to the east, then his plan makes perfect sense. If he needs to, maybe he can argue ISIS is planning big umbrellas to block out solar and wind plants, too. Or... what if they put a bomb on the sun????

Everyone's going to make so much money they won't mind the toxic water.

Trump, West Virginia Team Up To Free Coal Miners From Being Alive

Just think of all the hospital, rehab, and funeral home jobs this will create, too!

So what you have here is a coal-state governor admitting that even after Trump and his pals strip out environmental and safety protections that were supposedly choking off eastern coal jobs, the industry can't compete -- not even with other dirty coal fields in the west. That free market can really be a bitch when it won't cooperate, can't it? And let's not even get started on how automation, not regulation, has been the biggest driver in the loss of coal jobs.

Justice admits his plan hasn't actually gotten anywhere close to approval, but says Trump and his staff listened real good to his pitch. We're waiting for the inevitable leak of a presidential notepad with "Coal guy likes me, wants money to switch parties. Y/N?" scribbled on it.

Think Progress went to the Sierra Club for comment on Justice's brainstorm, and you can almost hear poor Bill Price, their Appalachian regional spokesman, sighing in exasperation as he replied in an email about Governor Dumbfuck:

It’s sadly not surprising that a coal industry billionaire-turned-politician is trying to drive taxpayer dollars into his own pockets, but what is truly heartbreaking is Justice’s lack of interest in actually diversifying West Virginia’s economy so that we’re not beholden to the long-term decline of the coal industry.

Price added that the state would probably benefit from some investments in new industries instead of "[doubling] down on a declining industry that has polluted our water, destroyed our mountains, and continually put our health at risk," not that Price or anyone has any illusions about where the money and influence remains in West Virginia politics. We congratulate him for not actually resorting to open obscenity, which we are more than happy to supply in his stead. Stupid coal-felching motherfuckers.

Another bunch of wild-eyed leftist green power advocates, Oil Change International, told Think Progress that U.S. taxpayers already subsidize the coal industry to the tune of $4 billion a year, very little of which actually results in better pay or more jobs for coal miners, but it sure is good for stock prices.

Now here's a crazy idea: Instead of artificially propping up the price for an energy source that can't compete and is harming the climate, how about investing in clean energy, which is becoming increasingly competitive with fossil fuels? Hahaha, we are joking! Republicans don't want the government picking winners and losers in the energy market, and it will give coal and oil all the money it can to prove it.

Yr Wonkette is supported by reader donations. Click the "Donate" linky to help! You can also do your part to subsidize green energy AND Yr Wonkette, plus reduce your own carbon footprint, with a wind power plan or a "portable" solar plan from our partners at Arcadia Energy! Suck it, coalboys!