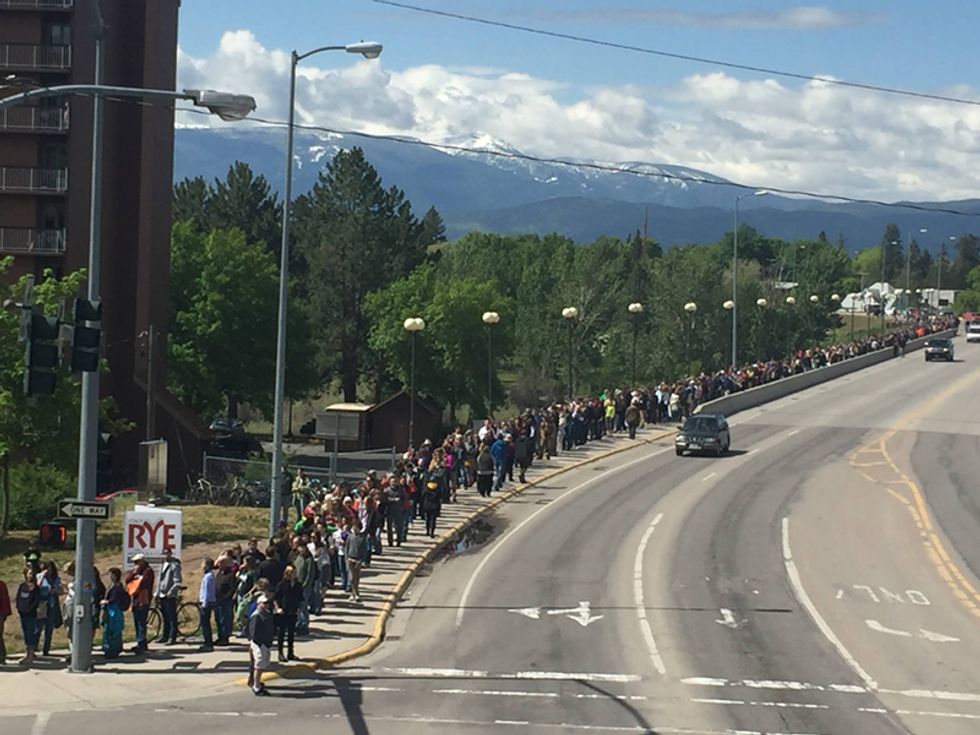 Missoula, Montana, is a college town full of liberals where you won't even get burned for a witch for having an "I Love Obamacare" sticker on your Prius, and it is where I live with my husband and my heiress, and it is where Bernie Sanders came to yell at us yesterday and it was great!

(Of course it was great! You don't have to vote for Bernie to know he is right about pretty much all the things; the only quibble we have with him on The Issues is JESUS CHRIST WERE YOU SLEEPING WHEN BARRY O BAMZ WAS BARELY ABLE TO SQUEEZE OUT OBAMACARE WITH A SUPERMAJORITY AND SPEAKER PELOSI, STOP WITH THE SINGLE PAYER AND MOVE THE FUCK ON TO GLOBAL WARMING, BECAUSE SHIT IS GETTING REAL.)

About 2000 were expected for the noon rally, so it was adorable that people were still moseying over at 11:30 and thought they'd get in. However! There was plenty of room for the several thousand extra folks to stand in the parking lot by the riverside Caras Park, where you could hear Sanders quite well and smile and cheer and whoop and say "TWENTY SEVEN DOLLARS" real cool like. Also, you could buy our last remaining cease-and-desisted Bernie for the Future T-shirts. (We sold our T-shirts out of a wagon like we were trying to hustle up money to get to the next Phish show, and now we can almost pay Robyn this month!) We saw several people wearing them in the wild! And 10 times as many people wearing the same T-shirt, but ripped off by Dastardly People On The Internet, on whom we would very much like to sic Universal's lawyers.

Let's look at some pretty pictures!

Hey, we know him!

It is BEARNIE SANDERS, GET IT?

All of the people were nice, except for the woman who kept glaring at my husband for ... reason? Maybe she wanted to do sex to him like the guy who tries to rape Bad Santa.

This is a cool shirt!

This was a very tired girl six hours later.

Hey, it is my stepson Keifer in his AUTHENTIC (-ally illegal) Wonkette Bernie shirt!

Wait a minute, that is not Donna Rose at the Bernie rally, that is Donna Rose in her baby soup getting ready to go to the hot springs! But she likes Bernie Sanders very much because he looks like a nice grandpa, and she watched almost all his election night speech one time until he got to the part about campaign finance reform, because JESUS, she's HEARD IT ALREADY OKAY?