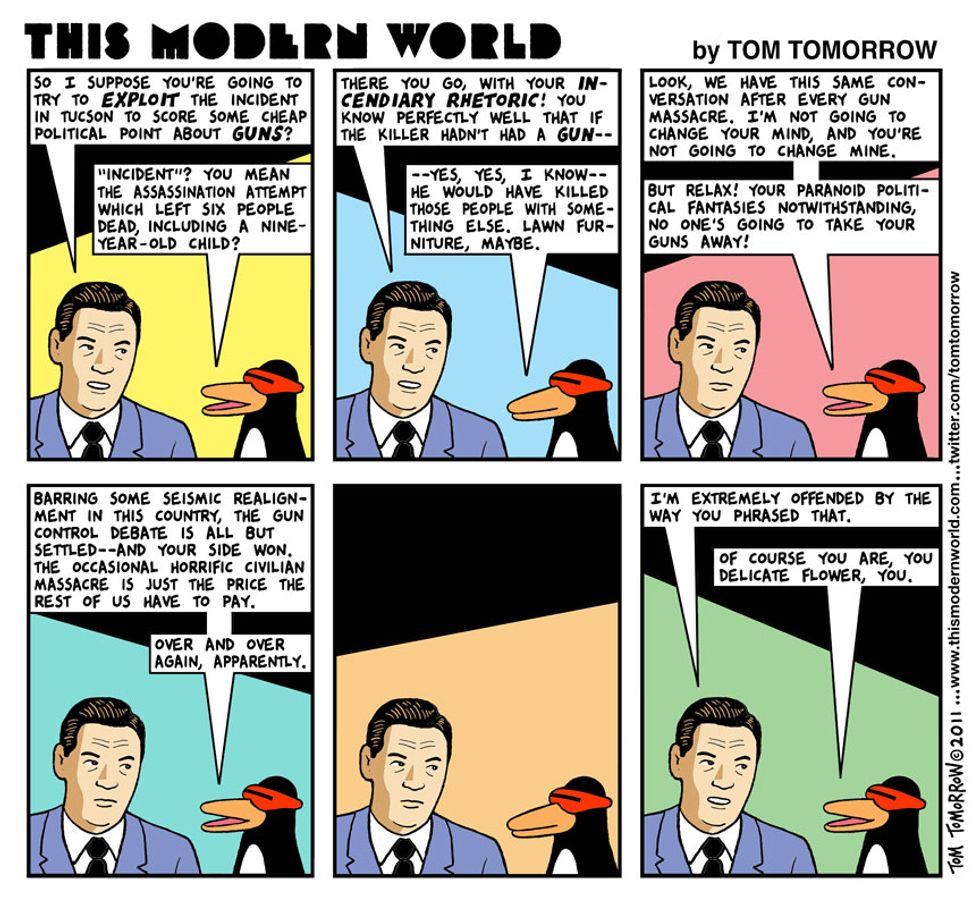 Greetings, filthy liberal gun grabbers! Does this seem like a bad time for a roundup of stupid gun-related news? We were thinking about writing this periodic update over the weekend, and then Monday happened, and also Sad Lee Stranahan was manfullywhining at us for being mean to him just because he’s A Idiot, and it just seemed safer for our blood pressure to stay off of Twitter and the Internet and away from the debate altogether. But now we have had a day or two to absorb this latest tragedy and can write without becoming so enraged that blood spurts out of our eyeballs. We think. As Napoleon reportedly said while watching his armies cross into Russia, screw it, what's the worst that could happen?

In its frantic scramble to wag its finger at Miley Cyrus for provocatively licking power tools or something, the media plum forgot to report more widely this enormous study by Boston University researchers on the link between gun ownership and homicide rates. Would you be shocked to learn that states with larger numbers of gun ownership “have disproportionately large numbers of death from firearm-related homicides”? Seems like a pretty simple equation to us: more guns = more gun-related murders. But we were never very good at math. Anyway, expect this very simple finding to be either completely ignored or given a vicious fisking by the moronic all-guns-all-the-time crowd if they ever hear about it.

Sometimes, of course, the gun fondlers do want stats. Take human-shaped anal fistula and stunning diorama artist Dana Loesch. Dana also was on Twitter on Monday night arguing with British people about guns and pushing statistics from a Daily Mail story showing that gun crime was soaring in England. Except whoops! Those stats are from 2002. More recent stats (.pdf) from the British government show that gun-related crime rates in Britain, as of 2011, had been falling for seven straight years. Make sure you pass that info onto all your wingnut relatives the next time any of them tries to make the case that crime across the pond is so bad, Kurt Russell is making Escape From London as a documentary.

Earlier Dana and Piers Morgan had one of their regular slap fights on Twitter over Iowa's plan to arm blind people, which Piers thought insane. Dana’s position – we think – was to demand the limey twit back up his opposition by providing stats showing that blind people kill a particularly large number of other people by shooting them. So since Piers obviously does not have such numbers, we guess that makes arming blind people okay? Kudos to Ricky Gervais, who happened to appear on Piers’s show during this whole shitfuffle, for succinctly stating what we are all thinking. Not that it will change anyone’s mind.

Kudos also to another group of comedians for this hilarious video. It contains so many things we love: Sarah Silverman, trenchant social commentary, Sarah Silverman. As a bonus, it resulted in this jumble of existential verbal confetti from our old buddy Colion Noir, who is a couple of stray dangling participles away from bearing a striking resemblance to the homeless guy we saw this morning mumbling to himself and taking a leak in the middle of a subway platform. Someone please take Colion’s video camera away before he pulls a hamstring.

Also in the category of hilarious performance art is this commentary from the Fox & Friends Morning Zoo Crew, which now includes noted moron Elizabeth Hasselbeck, who seems to have taken more blows to the head than her famous brother-in-law. Watching Liz, Doocy, and Not-Doocy trying to push off the blame for Monday’s terrible tragedy onto video games is a little like watching your infant niece puzzling over one of Stephen Hawking’s books. The argument is so shaky that by the end Hasselbeck has stumbled into suggesting what would essentially be a video-game registry to monitor the amount of time potentially crazy people are spending playing Grand Theft Auto V. Sure, no background checks for buying any gun you want, but by all means let’s give the authorities the power to monitor our video-game usage. If only Aaron Alexis’s xbox had automatically turned off every time he played Call of Duty for more than three hours, surely we could have prevented Monday’s shooting!

Liz, your brother-in-law must know a good neurologist. Seek a consultation, we beg you.

Finally, because we seem to have turned this into a survey of gun control’s more comedic possibilities, we give you this Tom Tomorrow cartoon published in the wake of the Gabby Giffords shooting in 2011. It pretty much sums up our feelings in the wake of Monday’s tragedy: mass shootings are now a permanent fixture of American life. The gun fondlers have won. And we are angry about it. We will be angry every time some nutjob takes a shotgun or an AR-15 or whatever and blows away a bunch of people for no reason. And as a price for their victory, every time that happens, people like Dana Loesch and Colion Noir are just going to have to shut the fuck up for a couple of weeks and listen while we rage. In fact, we think they should have to sit in the middle of a stadium while seventy thousand angry pro-gun control advocates heckle and throw grapefruit at them. It’s the least they can do, and they can be grateful that at least we’re firing tropical fruit and not bullets.