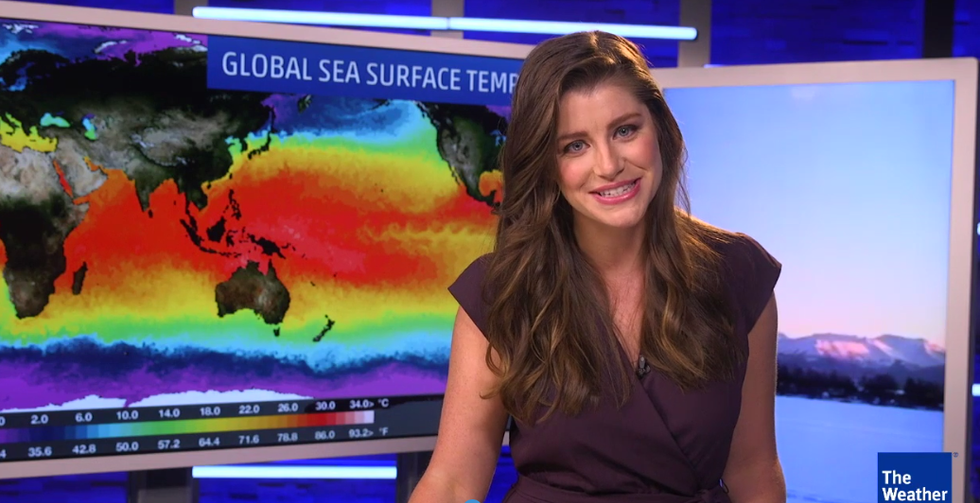 Hey Breitbart, this is what it looks like when a pretty lady calls you stupid. And also a cuck.

Your morning forecast on The Weather Channel is sunny flying conditions on the West Coast, with some lingering rains and snow on the East, it's 44 degrees and mostly cloudy in Washington DC, and the Dead Breitbart internet home for white supremacists and erection-deficient males needs to shut its ugly mouth before the Weather Channel gets even more pissed off:

Oh yes! Breitbart is so far outside the mainstream of US American society that it's being called out by boring cable channels your grandma watches while she's napping on her chair. Either that or the Weather Channel is PART OF THE LIE-BERAL CONSPIRACY!!!!111! How's the weather at HILLARY'S CHILD SEX RING, tell us that, weather gurus!

Is there a video? Oh yes, there is!

In the video, meteorologist Kait Parker calls Breitbart out for publishing an article called "Global Temperatures Plunge. Icy Silence From Climate Alarmists," and using a completely unrelated video Parker did for the Weather Channel about La Niña in order to bolster its bullshit claims. Money quote from Parker:

Science doesn't care about your opinion! Cherry-picking and twisting the facts will not change the future, nor the fact -- note, FACT, not opinion -- that the earth is warming.

ZING YA BURNT! Global warming will boil you to death, even if your Breitbart brain is way past its sell-by date. It ain't care!

Parker's particularly pissed because this Breitbart article was actually retweeted by the U.S. House Committee On Science, Space, and Technology (which we wrote about here!):

What's that? The House Science Committee retweeted Breitbart? Honey, it IS Breitbart.

Parker science-splains that, while Breitbart is trying to use one satellite reading of a drop in land temperatures to claim the planet is cooling, only a paste-diddling idiot would use land temperatures to measure that, since the earth is 70 percent water, and that water is where most of the heat energy is stored, QED, BAZINGA AND STUFF!

Parker says two more reasons Breitbart is a bag of uneducated dicks, and then concludes:

Next time you're thinking about publishing a cherry-picked article about El Niño, try consulting a scientist first!

HAHAHAHAHAHAHA, BREITBART FAILED SCIENCE AND HAS NEVER HAD SEX WITH A HUMAN WOMAN.

That's why it's so terrible.

If you want to read the whole science-y debunking for yourself, please do so!

Wonkette awards the Weather Channel eleventy whore diamonds for being so awesome, and promises to watch the network every single time we need to know about the weather in Albuquerque.