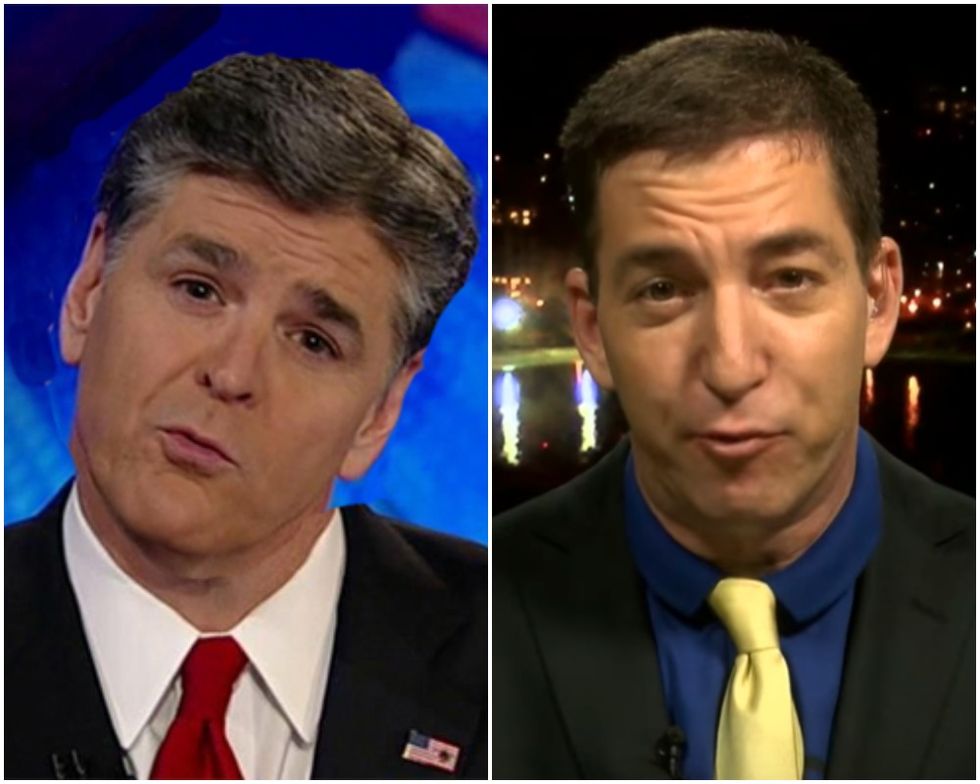 how we we be lovers if we can't be friends

Two evenings ago, we hilariously tweeted this:

Russian sources? INSIDE RUSSIA? You don't say! That is some breaking news we have not known since David Corn published the first journalism piece about the existence of the dossier, on October 31, 2016!

But that is for real what Hannity was reporting:

We explored why this is horseshit in our post about how it's entirely possible Devin Nunes hasn't even read his own damn memo. It would appear that the Fox News/House GOP/Donald Trump cohort have decided that it would be OK to slip some truth into their ratatouille of bugfuck conspiracy theories once in a while, as long as they say it BREATHLESSLY! like the actual truth is a SCANDAL! Because if CHRISTOPHER STEELE! used RUSSIAN SOURCES! for his DODGY DOSSIER! and HILLARY! was behind the funding for that work, that means HILLARY! colluded with RUSSIA! to MURDER DONALD TRUMP WITH URANIUM EMAILS OR WHAT HAVE YOU!

WHOA IF TRUE! Amazing that a former MI6 spy, one of the most respected spies in Christendom, who specializes in Russia, might have cultivated sources ... in Russia!

Here's Glenn Greenwald, who is either a witting or unwitting Kremlin asset, tweeting last July, dancing the very same #WhatAbout jig last that Hannity is dancing now, about how "If dossier intelligence came from Russia, HILLARY IS THE REAL RUSSIA!"

We dug up the Marcy Wheeler post Greenwald linked to, and it jibes with what we knew then, but not what we know now. It also doesn't quite ask the question Greenwald thought it did.

Wheeler's premise in that post was that if the Trump Tower Don Jr. Russian Spy Idiot meeting, where Don Jr. was offered sweet Hillary dirts in exchange for Daddy easing the Russian sanctions if/when he is elected (maybe thanks in part to an already ongoing Russo-Trumpian conspiracy to hack/steal the election!), was collusion, then a law firm associated with Hillary and the DNC hiring a private intel firm to do oppo research, a firm which then hired a well-regarded spy and Russia expert to dial into his sources and find out WTF about Trump and Russia, could also be read as collusion. Wheeler suggested back then that Chris Steele paid his Russian sources, but in the New York Times last month, Glenn Simpson, co-founder of Fusion GPS, said that is not true. (Steele was paid around $160,000 for his work, according to testimony Simpson gave to Congress.)

It's important to note that Wheeler's post came out early in the week Don Jr.'s Big Gay Russian Meeting was revealed, so people were still gathering and processing information at that moment. More precisely, it came out the day before Idiot Boy Junior tweeted out his own Russian emails about his Russian meeting, when we all got to read with our eyes about how the offer of Hillary dirt was "part of Russia and its government's support for Mr. Trump," and how utterly excited Young Weenerstump Junior was to be conspiring with the Russian government to take down Hillary. (Also, the part about how he didn't say "fuck you talkin' about, bro?" in response to "part of Russia and its government's support for Mr. Trump.")

Knowing what we know now about the GOP's justice-obstructing crusade to investigate the investigators, Wheeler's post reads as a prescient warning about GOP attacks that most certainly did come. Her point at the time, based on the limited knowledge of the Trump Tower Russian meeting that was available right that second, wasn't that a wide-ranging conspiracy to steal democracy for Donald Trump was the same as Fusion GPS hiring a spy to look into Trump's weird Russian connections, an investigation that surely seems like it uncovered the outlines of ... a wide-ranging conspiracy to steal democracy for Donald Trump. It was simply that if we define collusion down -- for instance crying "collusion!" just because Panty Dribbles Junior met a Russian, but before we actually know the details -- then it sets people like Devin Nunes and Sean Hannity up for a sexxxxy round of #Whataboutism, and also probably lots of 69-ing, probably.

And also idiots like Glenn Greenwald, who has been driving a #BowlingGreenMassacre narrative on the dossier for over a year now.

Remember how Greenwald doesn't get to go on MSNBC anymore because Rachel Maddow hates him, but he does go on Fox News, because they scratch his belly?