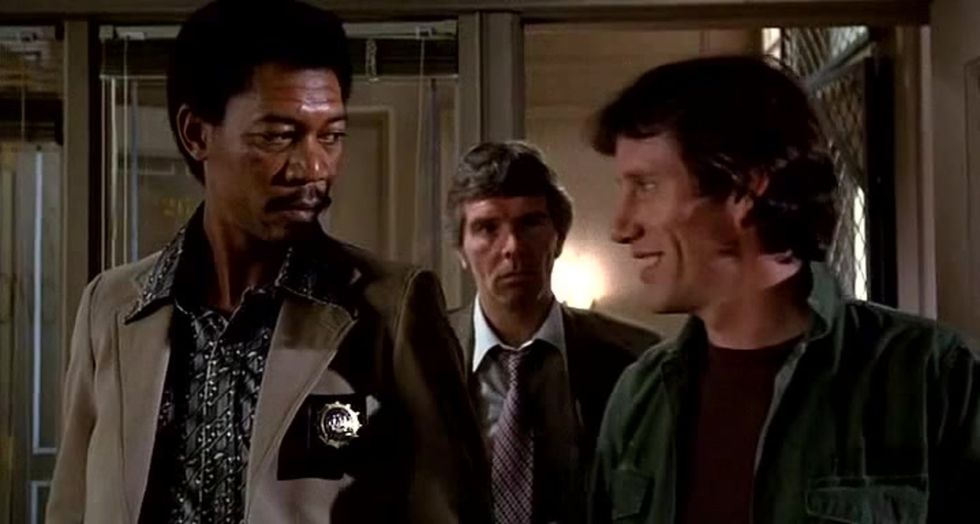 Imagine, for a moment, you are James Woods. It's been a real rough day for you, what with all of the indictment stuff happening, and probably you are very sad that everyone is talking about how Donald Trump's friends are very corrupt, and wishing that instead, everyone could be talking about Hillary Clinton's email crimes. You are so sick of all the "fake news," and spend a lot of time tweeting about that.

And you think for a moment that maybe this day can be saved by suddenly deciding to bring up all that fake "knockout game" shit again. Like maybe people will go, "OH! Never mind all of this stuff about how Donald Trump's friends are very corrupt, black people are doing knockout games to innocent white people AND RACIALLY PROFILING THEM IN THE PROCESS!" Because sure, sure, that is what racial profiling is.

But then there is a beacon of light. You see the "news" that the VOICE OF GOD HIMSELF, Morgan Freeman, who once narrated an ad for Hillary Clinton's campaign, said that Hillary Clinton must go to jail.

"Oh, for joy!" you would think, before even bothering to check and see if that were true or not, "Someone agrees with me and it is none other than one of my favorite actors, Morgan Freedom!"

According to the YourNewsWire.com site that Woods linked to, Freeman, while in New York promoting the new National Geographic series "The Story of Us," said:

“Hillary should be in jail for her unlawful deeds and President Trump should absolutely, absolutely make sure this happens to send the very strong message that no-one, and I mean no-one, is above the law in the United States of America.”

And then it got better, and even more Morgan Freeman-like:

Responding to a question about why he thinks President Trump has not yet fulfilled this particular campaign promise, Freeman laughed and said and looked up at the heavens before saying, “Goddamnit man, you were elected for this very reason, lock that bitch up!”

After being accused of political incorrectness, Freeman laughed again, saying “It’s all about being loving and caring these days, isn’t it?“

“The most loving and caring thing we as a society can do for Hillary Clinton is lock her up where she can get professional and institutional help and prevent her hurting herself or anyone else.”

Oh yes, that sure does sound a lot like Morgan Freeman! You know, the same Morgan Freeman who recently recorded this video for the Committee to Investigate Russia.

Unfortunately though, for both James Woods and the James Woods you are pretending to be right now, although it is possible that someone named "Morgan Freedom" did say those things, Hollywood actor Morgan Freeman definitely did not.

The comments were first "reported" by a site called "Neon Nettle," which appears to traffic entirely in "news" sourced from their own pipe dreams.

It does not provide audio of the supposed interview with Freeman, and there is literally no corroboration for it from any other sites at all, despite the fact that the "article" claims there were multiple "reporters" there. Also, it is fucking ridiculous.

But it gets even weirder. YourNewsWire, the site that Woods posted the article from, is part of The People's Voice TV network of sites (which as far as I can tell, includes YourNewsWire and another site called NewsPunch). It is currently owned and operated by one Sean Adl-Tabatabai (with many stories written by his mom, Carol). However, The People's Voice TV was once owned and operated by David Icke. Yes, that David Icke. The one who believes in lizard people. Which would explain this article on NewsPunch about how Britney Spears saw Prince William shapeshift into a lizard on a webcam.

The People's Voice TV has over 740,000 followers on Facebook. That is a LOT of followers. And yes, probably a lot of them have been bought, but their articles are also shared hundreds and hundreds of times and that isn't something you can buy.

So this is just a really good reminder for everyone -- be careful of what you share on social media, because sharing something that sounds too good to be true and isn't can result in you sharing something from a site that believes in lizard people, and looking like an idiot.

James Woods has since deleted the tweet, but before that, it was shared over 4,500 times, likely by people who still believe it this morning, and likely by some other people who were laughing their asses off at poor James Woods. He did not issue a retraction or apology for sullying Mr. Freeman's good name, or vow not to share things without first making sure they are actually true. He should probably get on that.

Wonkette is ad-free and 100% supported by readers like you!