Welcome To The Senate, Republican Mississippi Lady! You Will Be There For Eight Months, Max. 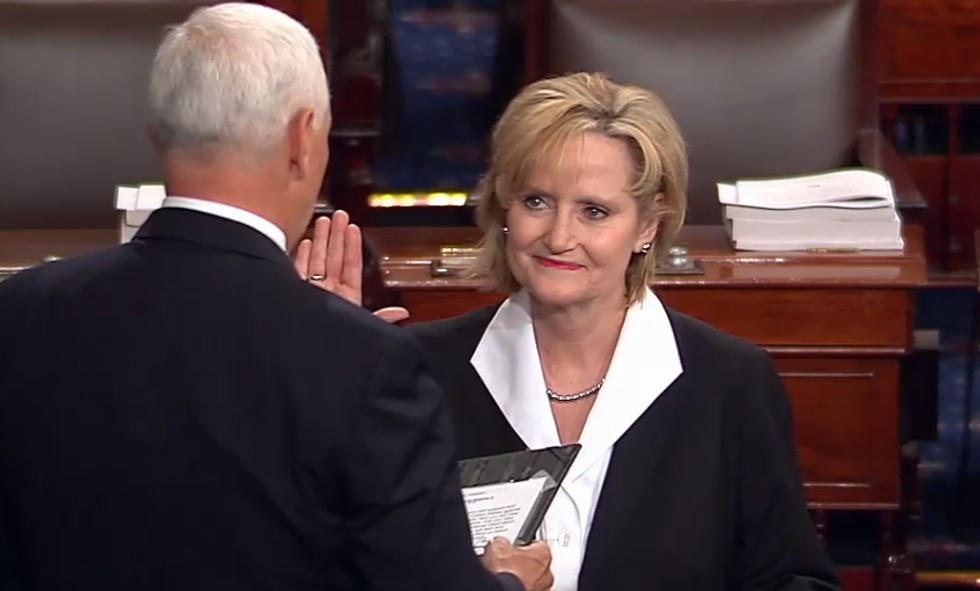 Good news! Now that Republican Cindy Hyde-Smith has been sworn in as US senator from Mississippi until voters have a special election on November 6, there are officially more women in the Senate than ever, for a grand total of 23. Hyde-Smith is also the first woman ever to represent Mississippi in Congress, which is kind of incredible when you think about it, but this is Mississippi we are talking about.

Hyde-Smith, who had been serving as the state's ag commissioner (she is a beef farmer, which means she farms beef), used to be an evil Democrat but now she is a godly Republican, which is why Mississippi Governor Phil Bryant was willing to appoint her to the seat being vacated by Thad Cochran. Of course, that doesn't mean many Mississippi conservatives won't question her dedication to Sparkle Motion, and she's likely to face a tough challenge from literal crazy person and Tea Party darling Chris McDaniel in the fall. Meanwhile, on her left is Mike Espy, who has launched a campaign to make the Senate seat from Mississippi blue, which sounds fucking crazy but actually might happen.

Regardless, our OFFICIAL WONKETTE TENTATIVE PREDICTION, WHICH MAY BE REVISED ANY TIME WE DAMN WANT, is that McDaniel siphons enough votes away from Hyde-Smith to be one of the top two vote-getters in the race, with Espy being the other one. We don't know what order they will be in, but a recent poll shows Espy with the most support in a three-way race. McDaniel currently trails Hyde-Smith, but we're assuming Mississippi Republicans are just as batshit as Alabama Republicans, and will pull a Roy Moore by the time this is over. At least that is what we are hoping for, in our quiet incognito way, because the Mississippi electorate is a lot like the Alabama electorate and if Espy can put together a Doug Jones-style coalition in Mississippi ...

(By the way, this will especially happen if Donald Trump ends up endorsing Hyde-Smith, because remember what happened to Luther Strange in Alabama after Trump endorsed him? The point is that Trump picks losers.)

We could be wrong, of course, though that rarely happens. McDaniel did lose to Thad Cochran in 2014, and while he made a strong case that it wasn't fair that Cochran had pulled a dirty trick on him by getting more votes, he did not get to become a senator.

Assuming none of these candidates breaks 50%, the November race will move to a run-off on November 27.

The Clarion-Ledger notes that after that poll was taken, another Democrat and another Republican have thrown their hats in the ring, so even if Wonkette's initial prediction is wrong, Mississippi's special election is guaranteed to be FUCKING NUTS in the fall.

Anyway, congratulations, Cindy Hyde-Smith! Enjoy your time as a senator, and we look forward to working like hell to make sure Mike Espy is the new senator come January of 2019, which is just eight months from now!