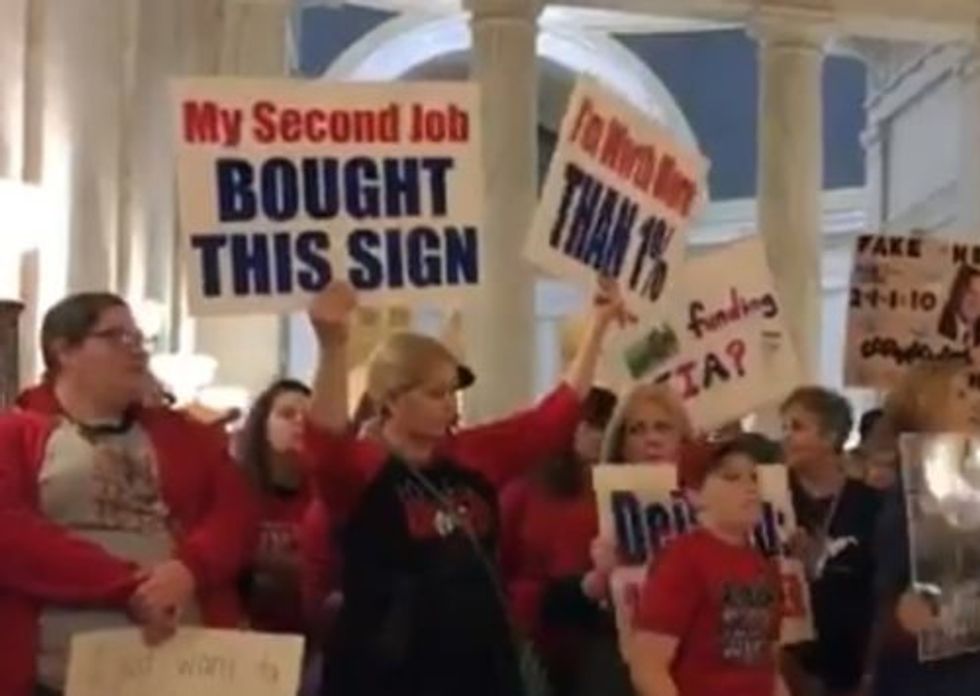 In a tweet, Justice was very pleased to take credit for the teachers' resilience and fortitude, because he's just that awful:

It was awfully nice he had the teachers backing him up on that. Next thing you know he'll be taking credit for all the lunches the teachers fixed and distributed so kids who rely on school lunch wouldn't go hungry. Also, let's not forget Jim Justice ran and was elected as a Democrat, then switched parties after the election so he could share a stage with and be praised by Donald Trump. Once he leaves office, he'll no doubt return to his previous job as a cast-iron rooster atop a barn.

It's worth noting, too, that state Senate Republicans may yet find a way to fuck this up. It seems very, very unlikely, but with those weasels, we do have to at least remind you nobody goes back to school until there's a signed bill. Senate President Mitch Carmichael, who said last week he didn't think the state could possibly afford the raise but now says he supports the deal, may decide at the last minute that each teacher will have to mine coal for 10 hours a month.

Dale Lee, president of the West Virginia Education Association, which is leading the strike (along with the state branch of the American Federation of Teachers and the staff union), said he's also waiting for the Lege to make it official, and expects "the kids to be back some time this week." Get it in writing, as the teachers also chanted.

The deal to raise wages for teachers, staff, and all state workers comes with a price, of course, because these are Republicans we're talking about. To offset the cost of the raise, the legislature plans to axe other parts of the budget, with at least $20 million in cuts to "general services" and to Medicaid. So of course Republicans ought to be able to get behind that. Fiscal responsibility, as long as they get to stick it to somebody. Poor people needing healthcare aren't as well-organized as teachers (who are also hardly going to be getting gold-plated pencil caddies -- West Virginia ranks 48th in teacher pay).

Now the state needs to fix the real issue: This was never primarily a strike about pay, it was about the rapidly increasing costs of the state's health insurance for public employees. When Justice and the Lege approved only a one percent raise two weeks ago, teachers walked out, since rising healthcare would more than negate that raise. Premium and out-of-pocket costs for the program are currently frozen, but teachers are demanding a long-term fix.

Still, that's a pretty happy bunch of teachers up there. Our favorite bit is when Jim Justice is trying to quiet down the crowd, which is chanting "Sign it! Sign it!" and then a bunch of teachers all raise one hand, fingers extended, in the universal elementary-teacher signal for "Gimme five" -- as they would for a rowdy bunch of second graders. And it works. (It's quickly followed by a few raised fists and a hands holding phones to capture the moment).

So congratulations, West Virginia teachers (we hope)! Don't touch a dry-erase marker until the raise is actually signed, and keep your marching shoes and posterboard handy in case the bastards don't fix your insurance. And thank you for being so inspiring -- you gave your students a terrific lesson in how America is supposed to work.

The West Virginia teachers' example appears to be spreading, too. The Los Angeles Times reports today that teachers in Oklahoma schools are talking about striking, too. As in West Virginia, Oklahoma Republicans have passed tax cut after tax cut, and now they're surprised that underpaid teachers in underfunded schools are heading elsewhere. As one high school teacher at an Oklahoma meeting pointed out,

Now let's just take one second and digest that. West Virginia teachers walked out — and they make more than us! [...] West Virginia!

Well, Oklahoma educators: You see what can get done when you're all together. Solidarity forever.

Yr Wonkette is supported by reader donations. Please click here to help us keep the servers running, the writers paid, and the victory fund endowed. With bourbon.