What Bad Dudes Are We Deporting Today? Dads And DREAMers, Of Course 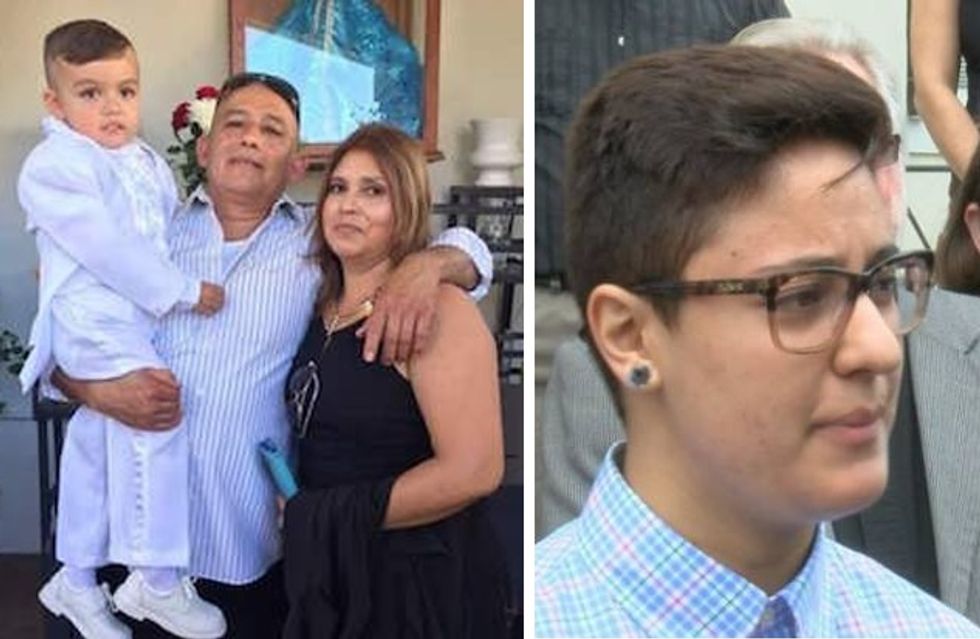 Time for another quick update on the Engreatenment of America under Donald Trump's exciting "deport everyone" policy, which is aimed at ridding the country of the absolute worst dangerous criminal aliens, who are defined as any undocumented immigrant who doesn't have their papers in order. Trump loves talking about all the really bad dudes we're scooping up, so let's meet a couple of these dangerous criminals who need to be sent away forever.

First up, we have dangerous threat to America Romulo Avelica-Gonzalez, who has been in this country without legal status for 25 years and is no doubt single-handedly the reason Trump voters have to press "1" for English, which just drives them crazy. Avelica-Gonzalez is the father of four U.S.-born daughters, who are citizens, but he was arrested Tuesday by Immigration and Customs Enforcement (ICE) officers while engaged in the dangerous criminal activity of taking two of his kids to school in the Highland Park neighborhood of Los Angeles. Here's cell phone video taken while his wife and 13-year-old daughter watched him get arrested just after dropping off another daughter, 12, at her elementary school:

Bet you feel a lot safer now! According to Avelica-Gonzalez's 19-year-old daughter, Jocelyn Avelica, the unmarked cars had followed her father from the moment he left home, but waited until after he dropped one kid at school to pull him over:

My dad was really scared. He didn't want to pull over, but he did. As soon as he did, one car went in front of his truck and one in back of his truck. They took him out and they arrested him. My little sister was still in the car, she's 13. My mom was also there.

Still, he was definitely one of those criminal aliens who Trump says we all need to be protected from. So how many people did he kill, rob, rape, or maim? Zero, if you want to get all nitpicky, though even an advocate for the family, attorney Emi MacLean, who works with with the National Day Laborer Organizing Network (NDLON), admits he's a multiple offender: He has a DUI conviction from a decade ago, and

"apparently a conviction from over 20 years ago related to having bought a car that he did not realize had a registration sticker on it that did not belong on the car," according to MacLean.

"Those are his criminal convictions in over 25 years in this country. And ICE is saying this is why he's a 'bad' immigrant and should be deported," MacLean explained.

We're willing to go way out on a limb here and suggest maybe Avelica-Gonzalez might not pose an immediate threat to America. Yes, this is now the place where our Deleted Commenters should jump in and scream "What part of illegal don't you understand?!?" The guy definitely doesn't have his papers in order, so clearly, he's Public Enemy Number One, and he was also taking some American's job doing food prep at a local Mexican restaurant. And if he's eventually deported -- he's received a temporary stay and is seeking an immigration court hearing -- we can look also forward to his family losing a source of income, possibly falling into poverty and needing public assistance. Hey, how's that "saving money by deporting all the illegals" thing working out?

Los Angeles Mayor Eric Garcetti has urged ICE to stop using unmarked cars and windbreakers identifying themselves only as "POLICE," since he wants residents of LA to know their own public safety officials are not part of this madness.

Connoisseurs of irony may appreciate this: On the day Avelica-Gonzalez was arrested, his eighth-grade daughter arrived at school in tears, just in time for her school's field trip to Los Angeles's Museum of Tolerance. First they came for the middle-aged dads, and we're speaking up, goddamn it.

Our second case study involves 22-year-old Daniela Vargas of Jackson, Mississippi, who was arrested Wednesday after speaking at a news conference to call for a stop to the Trump Administration's aggressive implementation of the New Cruelty. Guess they taught her a lesson, huh? Vargas was brought to the U.S. from Argentina by her parents when she was 7 years old, and has no criminal record, according to her attorney, Abby Peterson, who said Vargas had been protected by the Deferred Action for Childhood Arrivals (DACA) policy. But her status recently expired, making her fair game for arrest, even though she had applied February 10 to have her DACA status renewed for another two years. (Yes, yes, what part of illegal doesn't she understand?) Vargas's father and brother were arrested February 15, and are now in an ICE detention center in Louisiana; Vargas was handcuffed but released because she said she was protected by DACA. Her attorney says Vargas's public activism probably led the agency to go after her as a troublemaker:

“It could be retaliation,” Peterson said. “They had been reading about her in the news, they had seen her at this press conference... [maybe] they didn’t want to hear it anymore. Maybe I’m mistaken on that, but common sense would certainly imply that’s what happened.” Peterson said that Vargas did not have a criminal record, but had minor traffic offenses.

An ICE official said on Wednesday that Vargas was not initially taken into custody on Feb. 15 because she claimed she had DACA status ― but ICE subsequently verified that she did not.

Vargas is seeking relief through an immigration court, but may be America Firsted right into the same ICE prison where her father and brother await deportation. Also, she has no one to blame but herself for letting her DACA protection expire and then acting as if she has "rights."

Also, let's not forget that Donald Trump really has a soft spot for DREAMers. He even said so at his weirdass press conference, where he said DACA kids need to be treated with "a lot of heart." So presumably, Vargas will be jailed and deported as sympathetically as possible, with a teary-eyed Donald Trump waving as she's sent away to a country she's never really known. How much will all the court time cost? Surely a pittance compared to knowing that our country remains safe from an uppity would-be math major.

The shackles are off the Immigration Police, and damned if we even recognize our country anymore. Yes, yes, we're enemies of the people, too. Happily, we're citizens, so we can drive drunk or buy cars with hinky registration papers as much as we want, and we can live here without fear. Somebody cue that fucking Toby Keith song.

Yr Wonkette is ad-free and relies on generous donations from readers like you. And if you want to let the bastards know you're not gonna take it, consider a stylish "Hell. No." hat or "Enemy of the People" tee. If you're gonna be a target, you might as well be a sharp dressed target!